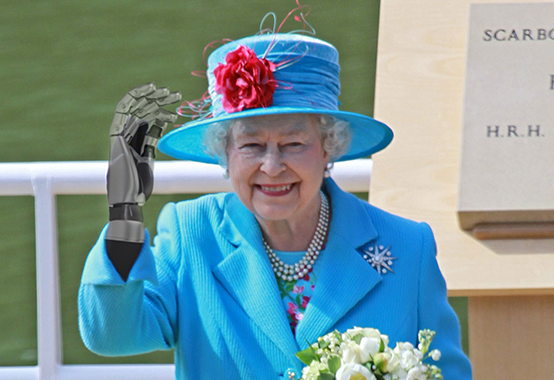 There are a lot of negative viewpoints on Britain’s capabilities to rebound as an economic superpower, after its heyday leading the world into the industrial revolution a very, very long time ago now. However, when it comes to driving out costs, privatisation and outsourcing of labor, and mercilessly adopting new tools and techniques to make themselves more efficient, their leading organizations are pretty damn good at jumping on the train.

And while the British government is the world’s biggest customer of offshore outsourcing (in fact its government has created a whole outsourcing economy of its own), Britain is also home to several of the upcoming automation software firms, such as Blue Prism, Thoughtonomy and IPSoft (a major presence there), the artificial intelligence firm Celaton, and several start-up robo boutiques, such as Genfour, Symphony and Virtual Operations.

Yes, people, when it comes to being first on the bandwagon for experimenting with solutions that can drive out cost and improve productivity, the UK – amazingly after all these years – still leads the way.  Our soon-to-be revealed As-a-Service study, which canvassed the viewpoints of 716 industry stakeholders, including 178 major enterprise service buyers, clearly shows how much more pervasive the adoption of both Robotic Process Automation (RPA) and analytics tools are among British enterprises, compared to enterprise service buyers in the other major global regions: 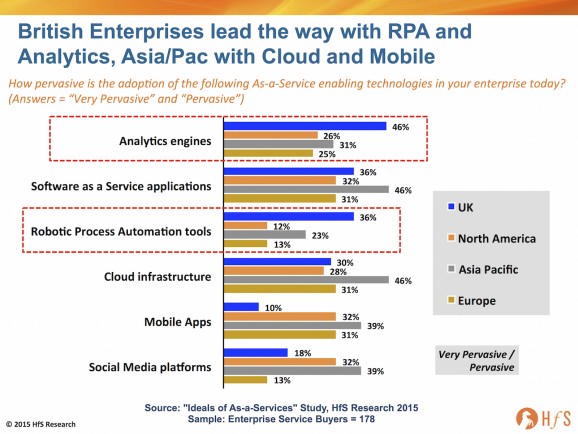 The Bottom-line:  As-a-Service is changing the service industry dynamics forever, making it possible for smart businesses to get ahead of the disruption curve

As we delve into these unprecedented survey findings, it’s becoming abundantly clear that the evolution to As-a-Service will be a long and painful one for many buyers, providers and advisors, but the core fundamentals are about enterprises operating with more speed and predictability, a higher quality of processes and more value-based provider relationships, that can enable them to “plug-in” to the services experience.

Enterprises which have opened themselves up to a lot of global outsourcing relationships in recent years, for example many UK-led businesses, are clearly forging ahead more aggressively with the next wave of As-a-Service value, which is building the foundation for smarter automation, more realtime, meaningful analytics capabilities and a much more accessible, standardized cloud driven delivery infrastructure.  As-a-Service is a global phenomenon and the future Fortune 500 in 3-5 years’ time will be made of of many nimble As-a-Service driven firms, which are globally ubiquitous, where most services are sourced, and delivered via intelligent cloud models.  Yes, the Germans will probably still make great cars, and the American leading in life sciences, the Chinese in hardware manufacturing etc., but the true As-a-Service driven organization?  Now that can be anywhere…