“HFS Research was an outstanding performer in the Analyst Value Survey. Buyers of analysts’ services rate HFS Research as one of the most valuable providers, and one of a handful of firms whose influence grew most impressively in 2012”

Leading expert and commentator of the global analyst industry, Duncan Chapple, former board member at the International Institute of Analyst Relations and CEO of LighthouseAR, has announced findings from the Analyst Value Survey, which included 198 enterprise consumers of analyst research to understand how much influence each major analyst firm has on enterprise buying decisions and the media.

Considering this study was focused on major analyst firms such as Gartner and Forrester, which cover broad enterprise IT and services buying trends (not just sourcing), we would be have been happy with finishing somewhere in the middle of the pack, but as you can see, we are making some pretty big waves in the enterprise. It’s pretty cool what you can do with a smart group of analysts a bunch of research and a blog: 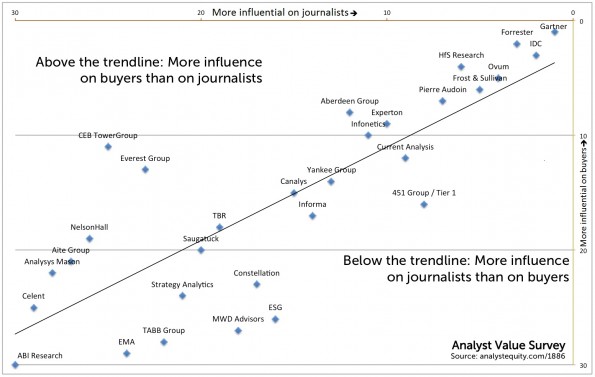 We, at HfS, are proud to represent the sourcing industry among the global analyst firms and help communicate today’s complex issues surrounding sourcing to the forefront of the enterprise agenda. Thanks for all your support.