Newsflash:  just because buyers aren’t always in a rush to outsource, doesn’t always mean they are too “short-term focused” or simply “missing the big picture”.

Our latest study shows that many buyer executives are, in actuality, in violent disagreement with many provider and sourcing advisor executives that their business leaders are too “short-term focused”: 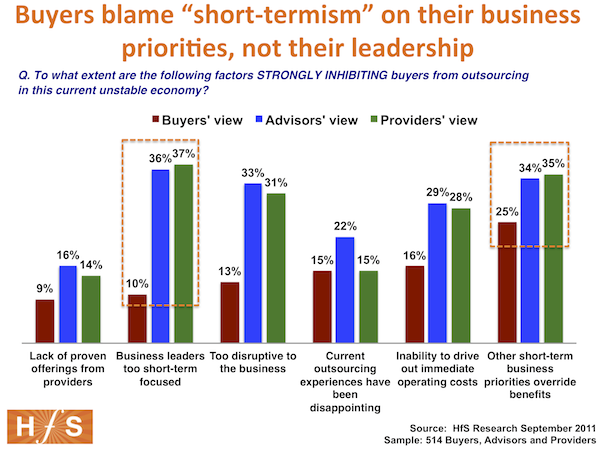 When you talk to some (and the operative word being some) advisor and provider executives, they are convinced that every company needs to outsource as much of their operations as they can – and as quickly as they can – so long as they can make the numbers work. It’s this attitude that – in my view – has been holding the outsourcing industry back.  Too many provider and advisor executives are overly myopic in their view that business leaders must be “short-term focused”, simply because they don’t pull the trigger on deals fast enough. 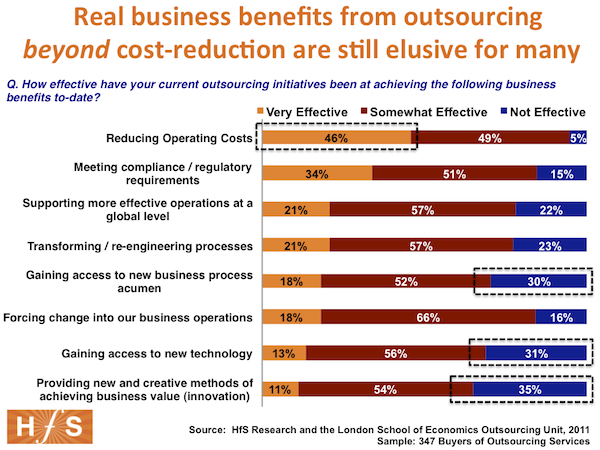 What’s more, many business function managers are under intense pressure these days to drive out more tangible cost wherever then can, so their resisting outsourcing (or taking time to do their due diligence) actually implies that many of them are justifiably avoiding rushing into a potentially hazardous irreversible scenario for their organization, if not executed correctly.

So if a business leader was genuinely short-term focused and had done their homework, they’d already know they could score some points with senior management and save mothership a few shekels by doing some outsourcing.

Additionally, only 13% of buyers are concerned about the disruption caused by outsourcing – much less than the third of providers and advisors who believe they are – which tells us the issues holding them back are more a lack of conviction about the benefits of outsourcing, than the sheer horror of the prospect that their help desk ticketing schedules and accounts receivable remittances are going to disappear down a sewer in Chennai and destroy their company.

The Bottom-line: Those providers and advisors which can demonstrate a genuine understanding of their clients’ business pressures, will win out

You do start to wonder whether many advisors and provider executives really have much understanding of their clients’ business pressures beyond cost-reduction – and our recent survey data, discussed above, supports this viewpoint.

When you look at the people some providers employ today, they are often young, hungry sales people who are only focused on “selling cost-reduction”.  It’s all they really know and are not experienced enough (or confident enough) to develop and demonstrate a genuine understanding of their clients’ true business pressures. Seeing as many of them previously were trained to sell ERP licenses, or web-development projects, it’s little surprise that they bring this mentality to their clients and end up frustrated that they can’t close deals fast enough.

What’s more, this also makes you question the mentality of several advisor executives, who clearly are laser-focused on pressuring an outsourcing deal negotiation onto their clients, as opposed to investing time to get closer to their overall business dynamics and pressures.

Providers need to start spending less on pointless marketing and investing more in hiring and training higher-caliber consultative client-side executives, who can develop much stronger affinities with their clients.  Moreover, advisors which want to do more than number-crunch deals, need to hire a balanced team of business consultants, in addition to deal negotiation specialists.

All-in-all, if buyers only see outsourcing as a cost-reduction lever, they are going to place it in a pecking order of other cost-reduction measures… and it’s not always going to the most effective short-term measure in a tough economy. It’s the job of advisors and providers to educate and demonstrate to buyers the benefits beyond cost-reduction, as opposed to sitting back and complaining that most buyers are short-term focused and paranoid about disruption and change.

Let’s hope this data opens a few eyes before we end up in a depressing race to the bottom, where the lowest cost and very basic operational performance capability, is all that clients can expect from many of today’s providers.

Thanks to all of you for your contributions to this research – your views are articulating loudly and clearly what this industry needs to do raise its game,