Is it time to de-social our lives? 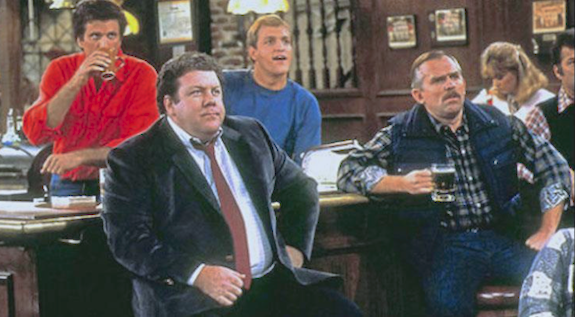 Shall we go home and tweet each other instead?

The hype over social media is over.  While most of us – as individuals – have found the right uses for social media in our personal and professional lives, its potential has, for now, been pretty much realized.

We can network like never before, communicating electronically with girlfriends we haven’t seen since our teens, with people with whom we once worked, forgot about, and probably will never see again, and with people we were subjected to at college and never really liked, whose Facebook pics of their kids seem mildly more than interesting than the presentation we are supposed to be reviewing.

Not only that, we are being deluged with crap from people we really don’t need – or want – to hear from, and will never acknowledge or respond to.  How important is it that someone I barely know just updated her LinkedIn profile, or someone I once fired just endorsed me for my management skills (seriously)?  How critical is it that my competitors are tweeting their own yawn-inducing PR at a faster rate than my firm… to no-one in particular?

If your life is anything like mine, you simply cannot cope with the velocity of electronic bullish*t surrounding your day. Let’s face facts here, folks… social media has become a distraction – and, (I hate to admit it), probably a big fat waste of time. It has also dragged me into having ridiculously superficial relationships with people I probably do not need to invest my time with, being ridiculously superficial.

While social has played a great purpose in expanding my electronic database and reconnecting me with all these people my life didn’t really need back in it, it’s now reached a point where I am trying to figure out how to de-social myself from some of this rubbish.

And to prove that “social” really doesn’t count for much when it comes to enterprise strategy, this is where it ranked as an enterprise priority, in our recent state of industry study conducted with KPMG: 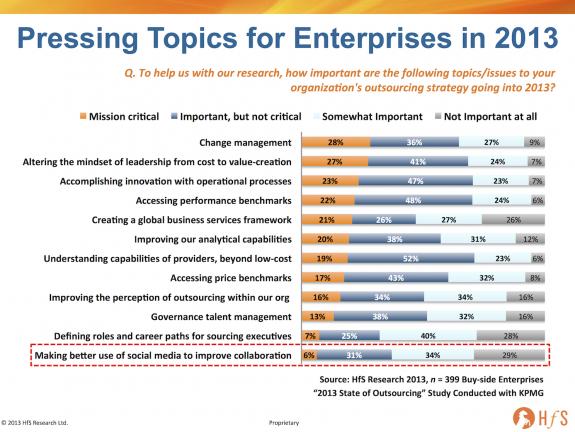 While people will argue that it’s still “early days” for social media, it’s already been years since the whole world (seemingly) started using it.  It’s here and it matters, but is it really enabling new business innovations and dominating corporate thinking?  I don’t think so – and neither do most of the 400 enterprises we spoke to. I would argue that it’s actually time to “de-social” our behavior to regain the effectiveness and quality of our interactions and relationships.

So here are some top-of-mind ideas on how to improve the quality of our real social lives:

1) Kill the PowerPoint in conference calls.  PPT gives everyone, bar the presenter, the opportunity to zone out and do mindless tasks – and you can only guess how many of the folks on the call are checking their Facebook updates or tweeting some mindless crap to noone in-particular.  Surprise your conference call comrades by engaging them in a (gasp) conversation.  They will actually have to listen and respond.

2) Remove the Twitter/LI/FB apps from your mobile device.  These apps will find a way to give you a notification update every 5 minutes, which I guarantee will have a meaningless impact on your life.  Go in and check your updates once or twice a day manually – you’ll save those hours of wasted time and energy nervously checking your phone like a reflex action that you just can’t control…

3) Start calling people up just to “chat”.  This may freak people out, but what happened to the days when you could call people and just talk about stuff?  It seems we spend more time trying to create a freaking appointment to talk for 30 mins in three weeks’ time, when you could have just called each other up there and then.

4) Make efforts to have more in-person meetings.  My word, the quality of interaction in a face-to-face meeting, versus a conference call or web-session, is eons higher.  You talk, you listen, you exchange ideas…

5) Go to more conferences.  Everyone’s just so “busy” these days, but what happened to those days when we went to conferences, met people, had a few beers with them etc?  Haven’t you noticed how “sanitized” some of your relationships have become?  It’s because you’re restricting your interactions to freaking LI messages, “likes” in facebook chats and re-bloody-tweets.  Take it from me – nothing beats a pint of beer, a glass of wine or a decent single malt to have a real conversation with someone.

To prove my point, I will buy anyone a drink who shows up at my office over the next two weeks… but hurry while stocks last 🙂