Robotic Process Automation has now penetrated a third of enterprises. Time to advance the conversation…

RPA 1.0 is a done discussion. We know what it is, we know what it can do, we know how it can augment operations and help digitize broken processes.  To this end, our brand new study on Intelligent Operations, which canvassed the dynamics of 371 global enterprises, already shows a third of them are very active with RPA within their IT and finance and accounting processes: 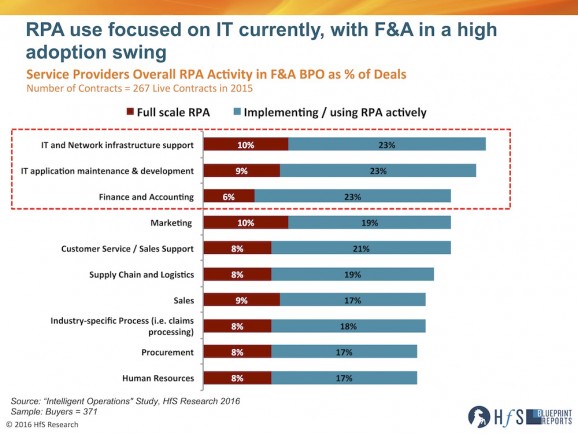 RPA is here and being adopted at a fast clip

All the incessant RPA hype has done its job – it has literally dominated IT services and BPO conversations at every conference, provider strategy deck, advisor “new practice” press release and many buyer converations.  Indeed, we can even forgive those cheesy sales presentations from guys who suddenly claimed to have 20 years’ experience as automation pioneers and talked about bot farms as if they were actually hand-raised on one…

The overwhelming conclusion is that a large chunk of enterprises are actively implementing it, and 10% even claim to have full scale RPA platforms up and running (let’s not dwell too much on the finer points of defining RPA here – the bigger picture here is the obsessive widespread focus, testing and deployment of automation tools).

What’s also significant is the deployment across processes that have been beset for so many decades by manual interventions, such as invoice processing and collections, in addition to higher knowledge-value areas, such as reporting analytics; this graphic illustrates the RPA implementation activity across all live F&A BPO engagements from our recent F&A-as-a-Service Blueprint report: 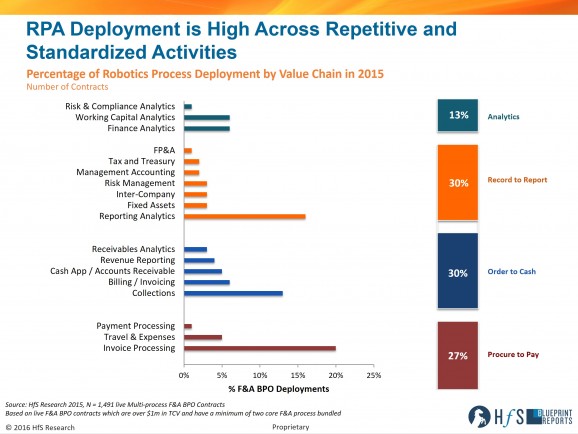 With the market moving so quickly, let’s not get overly-obsessed with this snapshot view as it’s likely to change considerably in the next couple of years, but you can already see how embedded the leading BPOs are getting deploying RPA elements into their existing engagements to advance the old model away from manual processes and shape up delivery into a more digital environment.  When you look at the shift to the Intelligent OneOffice, RPA is a key component of the digital underbelly, which we describe as the nervous system of the emerging digital enterprise: 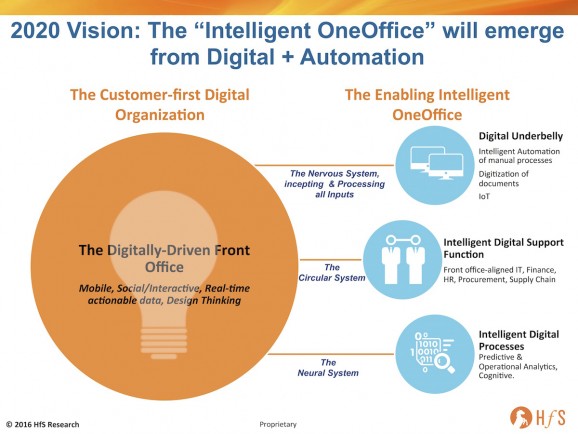 The Bottom-line: RPA is just one of several levers to pull for enterprises to achieve a true Intelligent OneOffice

Automation is just part of the story as enterprises look to bring the back office in line with the middle and front – albeit a very important one, as many enterprises will simply fail if they cannot digitize many of their core processes (and decide which ones to focus on, as they cannot digitize everything). Being suffocated by manual interventions, legacy applications and mainframes, still reliant on spaghetti code and COBOL, is becoming such an irritating impediment holding back so many enterprises from benefiting from operating in the digital world.  RPA is just one tool to help get there – and it’s now here and ready to use.  So let’s advance the conversation to driving the circular and neural systems of the enterprise to really make the shift by orienting our talent, creating data access capabilities that are predictive and cognitive… which we can use meaningfully to create opportunities, not simply react to them.