We’re very shortly going to reveal the incredible findings (and they really are) of our new Technology in BPO study, and one of the key areas that jumps out at us is the rising importance of automation as a core value-driver for BPO clients.

As organizations seek to “cross the chasm” from a legacy labor arbitrage / staff augmentation model of business service delivery to a technology-enabled service experience that isn’t completely dependent on adding extra bodies to scale a service, the most immediate measure is to map out simple process workflows that humans are doing, and develop them in a software program using a process automation tool (and yes, I am trying to avoid using the term “robot” for now…).

Suddenly BPO clients discover, for example, that as sales of a particular product increase, they can scale their order management capability by replicating many of the human tasks processing those orders, as opposed to simply throwing more bodies at the problem.  Many service providers will not be happy as this may well hurt their model of earning money through the supply of additional labor, but smart clients are already wisening up to the fact they need to get out of the FTE game.  So, we asked HfS’ Charles Sutherland to share his views on what is really happening with process automation and why is shouldn’t be confused with technology automation theories of yesteryear…

We’ve seen it all before: IT suites, BPM Suites, customer service management tools etc. so how is this any different?

I came across a blog on automation by Somok Roy at ISG entitled “Lets Be Clear: Automation Is Not New Technology“.   I couldn’t be more in agreement with the title, and its premise that the term “automation” is imprecise and a source of confusion.   In fact, the blog is a case study in how automation can be misunderstood when approached as a lesson in IT history and not as a means to solve a set of current business problems.

So in the spirit of collegiality, I thought it would be useful to share some perspectives on why process automation is more than a surge of breathless marketing and less than the arrival of an entirely new outsourcing paradigm, but still a solution to many business problems.   That’s why it is resonating with every enterprise client and every service provider we talk to today – and why two current market surveys we have in the field capture interest in automation as a solution to current business problems that is second only to analytics: 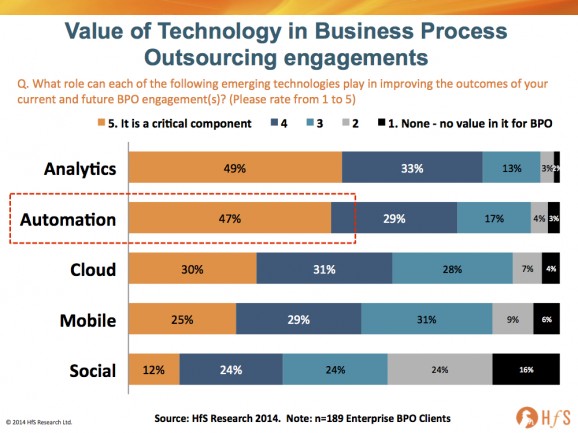 My take is that all these other forms of automation have certainly played a role in how IT and business processes are delivered inside clients and in service providers, but in many cases those tools are too hard to implement, over-engineered, too costly and – more often than not – fail to live up to their promise. If they were so great, we wouldn’t have had the creation of the “lights-on-outsourcing” industry that we have today or at least certainly not at the scale it has reached. Instead, we’ve had an FTE-dependent model for service delivery that, for a great many enterprises (and service providers) is losing its viability, as ongoing productivity gains prove harder to squeeze out of the status quo and COLA driven increases reduce the business benefits for all.

Process automation is new in that it doesn’t try to be as transformative as BPM Suites or as dependent on deep tech skills as past IT infrastructure automation tools.  Instead, these new breed of tools, such as Blue Prism, IPSoft and UiPath, are meant to be used by business analysts working on small-to-medium sized projects so that they can replicate the process done today by a human, by setting up a software-based equivalent instead. When that occurs, it becomes possible to reduce costs further, pilot additional new productivity improvements and make these changes quickly, whether in the enterprise location and or in a service providers delivery center.   To me, actually achieving process automation quickly, with lower net costs and without the overhead of a broad transformative effort seems like something new.  That their interfaces are user friendly and you can readily apply them, even in the sort of Citrix-based processing environments many BPOs use today, also suggests that they are something new.   I’m not a developer by any means and so when I can use them to replicate simple processes with only a minimal level of training, then that also suggests that there might be something new in this as well.

The Bottom-line: Automation projects can provide those first baby-steps away from the FTE-model

They are a step in the journey, especially for enterprises that aren’t in a position to swap out their enterprise applications, but are looking for something more than they can achieve by merely hurling incremental labor at a process. 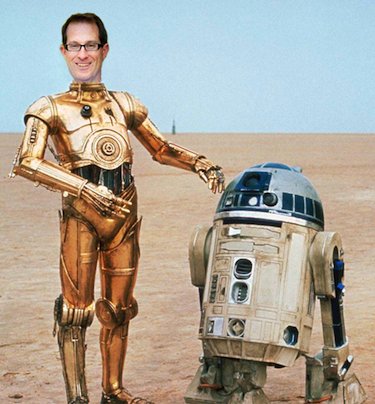 Now here is where the breathlessness has occurred so far….  these tools don’t eliminate the value of all the other automation capabilities out there.

So, if you step back and don’t try to confuse this emerging capability in process automation with other forms of the term covering BPM, analytics and infrastructure monitoring, then maybe, just maybe it will be a little clearer why this is an important trend in business services delivery in 2014+.

Charles Sutherland is author of “Framing a Constitution for Robotistan“, which you can download here.