Forget the Trump, 2015 has been one helluva year for pontification on big disruptive, and occasionally ridiculous topics.

Anything robotics, artificial intelligence, the end of work, the end of sanity… the end of pretty much anything has been bandied around. Hence, it was refreshing to bring together a host of service buyers and providers in Harvard last week, to dial back into planet earth and really get to the point of where we need to take things.

Glaring into a future, where there is no written rule book, no set curriculum to follow, can be a little daunting.  So it can’t hurt to take a look at some of the mistakes of our past to create a more long-term, focused strategy to set us in better stead as we embark on this new wave of change and disruption to our cosy little world:  the Continuum that begins with establishing a rudimentary, trigger-based Robotic Process Automation underbelly, that forms the building blocks for incremental investments in more predictive autonomics and – ultimately – cognitive self-learning capabilities, before reaching a haven of true artificial intelligence (which doesn’t actually exist yet, but we can all dream, right?): 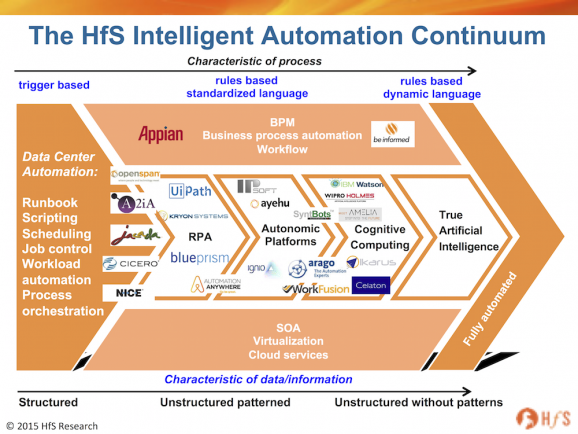 I’ve been reading some interesting arguments that discuss separating RPA out from the more intelligent developments further along the Continuum.  And they’re half right, but I also argue they’re half short-sighted too.  The best comparable is BPO, where we are going to see most RPA deployments, as many service buyers seek to eke out more productivity from their messy processes, which they didn’t quite get right the first time around.

And why – pray tell – did so many BPO buyers not do enough that first time around?  Why is our industry literally littered with hundreds pf underperforming BPO contracts that are caught in a purgatory of status quo, where the provider has no desire to change anything and simply keep pumping home their predictable profit margins from a pre-set provision of offshore FTEs, while their buyers have long-lost the attention of their CFOs to get renewed investments to make their processes run better.

Why is it that so many BPO buyers only enjoyed some “transformation” during their brief 18-24 month transition towards a BPO steady-state, before their service provider packed up the Visio charts and redeployed their process wonks to work on that next deal coming down the pipe?

The Bottom-line:  Only focusing on RPA is a fast-track to short-term disappointment.  A broader Continuum focus is where the smart buyers are headed

The answer is simple – most BPO buyers only focused on getting that initial 30-40% of cost out the door.  They were not thinking beyond that.  They did not budget or create a real plan for achieving ongoing process improvements and innovations, once they reached that steady state of lower cost. And it’s the same with RPA and cognitive – focusing only on the short-term cost is only going to get you so far.

Do you think your CFO is really going to release significant funds to embark on a cognitive strategy once you have reached a happy state of RPA, where you have a few bots cranking through processes more effectively and more headcount freed up to do other things?  Did that same CFO open up the coffers to invest in significant process transformation once BPO steady state was reached?  Of course he/she didn’t…

So learn from that experience to make a broader business case for an intelligent automation journey right from the onset. RPA is only the first step on a journey of self-learning, self-healing, dynamic process creation and really smart decision making support for your business.  Don’t ring-fence it… embed it in a broader program of Intelligent Automation.