When vendors, particularly hardware and software vendors, were running around and talking about ‘Cloud this and Cloud that’, and ‘Big Data this and Big Data that’, we felt they were missing the point, because they weren’t driving conversion. Whereas the SMAC Stack, when it is integrated, does start to drive business solutions.

Now to the real meat of our discussion with Cognizant’s strategy lead, Malcolm Frank, where we discuss the future of the CIO’s role and the IT function, the SMAC Stack and those Things of Internet, or is it the Internet of Things… 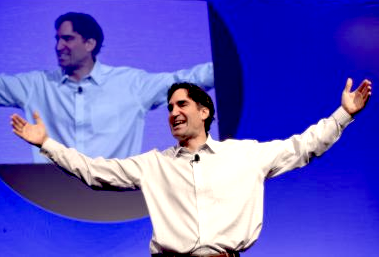 Malcolm Frank is EVP, Strategy and Marketing for Cognizant

Phil Fersht, CEO HfS Research: Malcolm, we’re hearing a lot about CIO turnover – in the last year, in particular. I think many companies emerge from recession and the needs and demands on the CIO clearly shift. What do you see as the attributes that make a successful CIO today?

Malcolm Frank, EVP Strategy & Marketing, Cognizant: Yeah, it is really two primary items. The first is what I just described that, if you look at the prior market through a CIO lens, there were these austerity programs between the Internet bubble to Bear Stearns – that eight year window. Make sure you have the IT backbone secure, rock solid stable and cheap. I mean you look at what’s occurring today and we’re getting to a world where a CIO is being asked through the SMAC Stack to fundamentally innovate, not just provide the backbone of the company, but to innovate into the product itself or the service itself of the company. So you see this in many different realms. It could be in automotive where all the auto manufacturers are saying if “We want to transform what the car really is. Our consumers are saying a $300 iPhone is so smart but my $30,000 car is so dumb”. So the CEOs turn around to the CIO and say, “You are the technology person. We presume you should do that.” And IT turns around and says, “We don’t have that skill yet”. And so that gap needs to be closed. And I think in closing that gap, you’re seeing new demands on the CIO office and in many cases it is driving CIO turnover.

Phil: And one of the things which you guys coined at Cognizant, is this term the ‘SMAC Stack’, the Social Mobile Analytics and Cloud platform. But what do you really mean by that when you talk to a CIO or even a COO / CFO today? How should you think about those four elements as you evolve your technology strategy?

Malcolm: We’re trying to convey a few important issues when we talk SMAC Stack. The first is it is integrated. So that’s the stack portion of it. And there is a multiplier effect when you can have a mobile solution in the cloud that’s driving tons of customer analytics. And so it’s important for clients to conceptualize these as an integrated stack. When vendors, particularly hardware and software vendors, were running around and talking about ‘Cloud this and Cloud that’, and ‘Big Data this and Big Data that’, we felt they were missing the point, because they weren’t driving conversion. Whereas the SMAC Stack, when it is integrated, does start to drive business solutions.

A second important point is that enterprise IT has gone through multiple phases. And each phase is cumulative – they build upon one another. For example we had mainframes leading to minicomputers, then to client/server leading to the Internet. We think that the SMAC Stack represents that fifth wave but it needs to be integrated and sitting on top of the prior waves. So we’re not going to see legacy environments go away. The issue is how do you take the SMAC Stack to then tap into your ERP backbone or your CRM infrastructure to leverage those in ways that you haven’t before. So that’s we were pushing into the market place and it has resonated reasonably well.

Phil: So when you look at enterprises 10 years down the road, Malcolm, trying to look out a long way out here, what do you think they are going to look like?

Malcolm: It’s a great question, Phil. 10 years is a long, long way particularly these days! But I’ll give a try. A couple of things, Phil, that we do know, if you look at technology. I think the Internet of Things is a very big deal, and we have underestimated that to date. In some pockets, I think people really do get it, but the overall market has to yet to fully digest what that means when we have, today, about 10 billion computers that are IT addressable and online. And ten years from now that’s going to go up by an order of magnitude. In order to make this massive shift where today, most data that’s created is created by human beings. But we are going to cross the line where most data which is generated is by machines. So it can be machine-to-machine communication or machine-to-human communication, and vice versa.

So that shift is going to,I think, redefine what is the role of IT and also redefine what is the value of a product. And we’re already starting to see instances of this. For example, look at General Electric. And their whole marketing, now, is around brilliant machines, where they are saying ‘it’s not the value of a jet engine per se, but it’s that halo of information that’s around it from this smart machine’. And with their locomotives and generators and the rest. You’re seeing it with Nike and FuelBand, or from Disney in creating their Magic Band. And so I think we’re making the shift where our customers, Fortune 500 firms, are recognizing if they can actually generate more value or economic value from the information around people and products as opposed to the actual asset themselves.

Phil: You’ve had a very successful career in the technology industry, Malcolm, but if you could go back 20 years and start it all over again, is there anything you do differently?

Malcolm: It’s one of those things one does in life, if you look at the mistakes you’ve made and obsess over them and think “Wow, how could I have avoided those mistakes?” But the more time that goes by I am actually feeling fortunate of having made those mistakes, because it opens your eyes to how you avoid them in the future. And I think some of the contributions I’ve made in the Cognizant context is the direct result of recognizing what goes wrong when you don’t pay attention to some of these issues. So, I think from that view, Phil, of course, you look back at some product innovations, such as Youtube today or Facebook today and think, “Why didn’t I come up with that?”. But one has to be realistic. So the short answer is ‘No’. It’s been a great journey. I think all of us in this business have to remember just how quickly the market moves and you really have to pay attention to that. And if you don’t then companies can get punished and it’s a great lesson. So it’s always an exhilarating ride in our business. It means you’re going to have some really exciting highs but it also means you’re going to have lows that come with it. I think it’s nature of the beast.

So given that context, I don’t think there’s not much that I would have changed.

Phil: Well, thank you very much for spending some time with us today. We look forward to sharing this discussion with all our readers, Malcolm.

Malcolm: Okay, great, appreciate it and would welcome any ideas or questions from them.

Malcolm Frank (pictured) is EVP, Strategy and Marketing for Cognizant.  You can read his full bio by clicking here.