The financial markets have fired warning shots across the bows of Kyndryl’s management. To be more precise, it’s more a barrage of artillery fire, as investors obsess with bashing tech firms that sustain the old, as opposed to their hugely inflating the valuations of the shiny new tech stuff. What they tend to forget is that much of the old can’t be ripped and replaced overnight as the majority of the Global 2000 is in a desperate rush to hurl their legacy into the cloud:

Our Pulse study of 800 Global 2000 enterprises clearly illustrates two factors that dominate the focus of leaders:  moving operations into the cloud at speed and training staff to understand how to balance digital business needs in a virtual environment.  Surely there is still some value left in the likes of a Kyndryl as firms demand immediacy of cloudification and a desperate need to plug talent gaps fast? 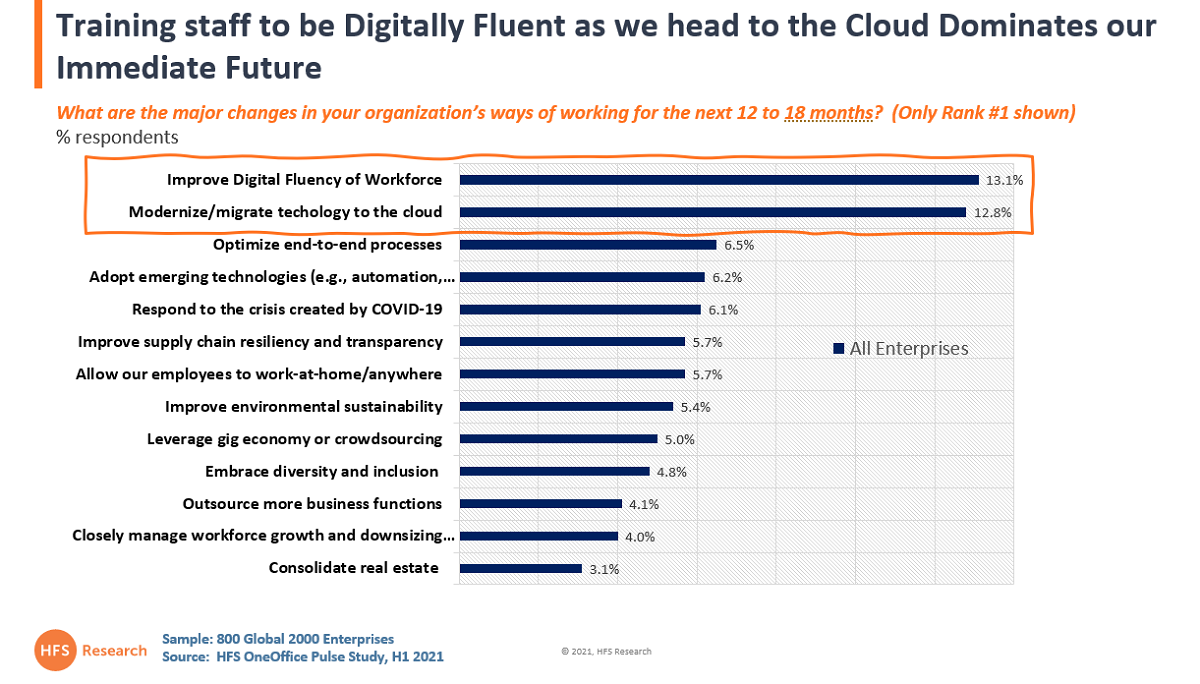 In short, Kyndryl has started life as a separate entity with still-colossal revenues of $19 billion. After a lackluster first earnings report the market cap was a mere $4 billion, which has now slipped even lower. However, these warning shots are not just a worrying sign for Kyndryl’s new management, but also for service providers weighed down by legacy infrastructure services such as Atos, DXC, and the like.  With tech infrastructure commoditizing faster than knock-off AirPods on Amazon , the need to support rapid complex enterprise change is where the focus is firmly shifting, and where these traditional infrastructure providers can help.

Executives at Kyndryl were suggesting that the separation from IBM would more than double their addressable market from $240 billion pre-spin to $510 billion by 2024. Intelligent Automation, data services, cloud services, security and resiliency are said to be the segments that would drive an expansion of 7% CAGR growth in those segments. The key levers for this expansion are meant to be upskilling of talent around cloud capabilities, a more energy-efficient operation of data centers, and a strong increase in the application of Intelligent Automation. However, in its first earnings statement, perhaps not surprisingly, the big picture is still that of decline, with revenues in Q3 decreasing YoY to $4.6 billion.

While the launch of Kyndryl was underwhelming both in terms of communication as well as conveying a compelling investment thesis, executives were pointing to the new partnership with Microsoft as a reference point for new strategic options after the separation. Furthermore, the company announced a tuck-in acquisition of Samlink, a Finnish service provider focused on financial services (very familiar to Cognizant). Yet, despite this progress, the (ridiculously) low market capitalization is hanging like a millstone around Kyndryl’s neck as there are several IT services firms that can easily digest an acquisition with this price tag, confident of quickly upping that $3.5b valuation to at least $10b. First off, opportunistic M&A moves.

Possible Scenarios. Which firm has the cojones to aggregate legacy infrastructure?

The purists will argue that Kyndryl is a dead asset unless someone revives its mojo, is prepared to cannibalize it’s own assets, and move legacy workloads to the cloud.  But surely there are some juicy clients to be won over and profitability to be eeked out if Kyndryl is handled with surgical gloves.  Moreover, let’s not forget about the awesome talent that came across from the IBM divestment including the leadership of the respected Martin Schroeter who knows this business inside and out, and will now have the chance to make some incisive changes outside of the IBM shackles..

So let’s examine the suitors which would have little problem raising $3-5bn to seal the deal:

HFS verdict: We consider them the favorites to make this acquisition with its IBM history and strong heritage and appetite for infrastructure services. It’s hard to see them not fancying their chances to make this a super-lucrative venture for themselves and become one of the largest service providers around.

HFS verdict: The new CEO transition will likely derail this for Atos.  However, they could move fast seeing Kyndryl as a bargain replacement for the DXC-sized hole in its aspirations.  A definite possibility.

HFS verdict: Cap has made its OT+IT bed and this deal seems a bit too left-field for their new direction. A distinct possibility, but it’s likely Cap will shy away from a major infra play in this market.

HFS verdict: Makes a lot of strategic sense, but previous acquisition horrors will likely hold Infy back here.  However, a bold move is on the cards after such a strong growth surge, and recent successes with its Cobalt cloud launch and mega Daimler cloud engagement might just tip the balance in their decision-making.

HFS Verdict:  A definite dark horse in the race, but you have to doubt whether Humphries wants to take such a huge gamble just as the firm has found a strong growth-groove and new leaders settling in to the firm.

HFS Verdict:  GCP is an outlier possibility, but you have to question why it hasn’t made any moves into infra cloud services since its dabble with DXC.  The price tag is certainly digestible for Google, but you have to think it has shifted focus away from making a major services acquisition – and Thomas Kurian taking the helm definitely shifts the onus to software and not services.

Kyndryl must strike back with clearer communication and more strategic moves

The more likely scenario is that Kyndryl will seek to calm investors’ nerves with a much more compelling investment thesis. That would require a more imaginative strategy, beyond an expanded addressable market and improved operational efficiencies to improve its flagging profit margins (see below). For instance, outlining bold investments in innovation or strategic partnerships with Chinese hyperscalers are the messages and actions investors want to see being made. Thus far, communication has focused on infrastructure being the core for innovation. Yet, this is ignoring the elephant in the room: it is a margin-sucking core. The following chart provides the context of the operating margin of IBM’s two services business lines, with Global Technology Services being the core of the spun out entity:

The Bottom-line:  It’s likely we’ll see some acquisitive moves on Kyndryl in a market short on talent and great at adding sugar frosting to commodity work

Infrastructure services provide us with a classic example of the Innovators Dilemma – should firms prioritize meeting clients’ immediate needs versus focusing on future innovations that could create opportunities in the future?  IBM has made the difficult and (probably) correct decision to spin out its legacy infrastructure assets. Yet, the communication behind the launch of the new company Kyndryl has been underwhelming, lacking a fresh vision for its assets. Therefore, unsurprisingly the financial markets have not been remotely excited by the new company, with a revenue to market cap disparity that is even worse than Conduent and Unisys. Atos and other providers, held back by legacy, can glean valuable lessons from those experiences. It’s been many years since we’ve seen a firm the sheer size of Kyndryl is finding itself in such a position where so many suitors will think they can find some gold in it.