Who are the leading IT and BPO services firms in Asia Pacific region?

Over the last few weeks we’ve written a few blogs about the leading BPO/IT services players in EMEA, more recently the leading BPO/IT services players in North America. Now is the turn of Asia and the Pacific region. This region is more awkward, with a list containing a few familiar faces, but many less familiar to those outside of the region. The most dominant force in the Asian market are the Japanese players – Fujitsu, NTT Data, NEC ad Hitachi – with some notable players from Korea such as Samsung SDS. 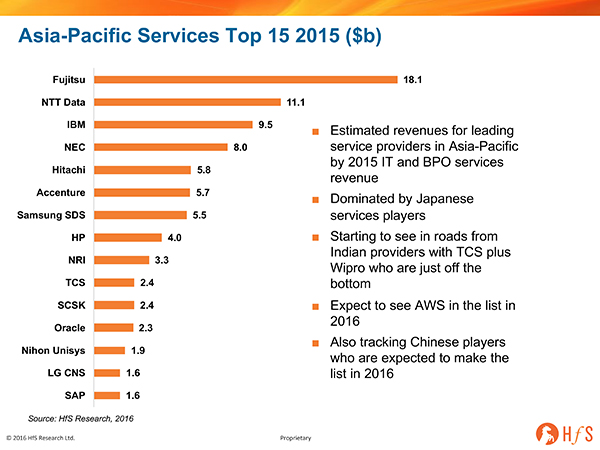 Although most of the trends are familiar – the traditional players struggling to grow, while battling to gain mindshare in new As-a-Service business models like cloud infrastructure, BPaaS, and SaaS. Although

Perhaps surprising to many outside of the region is the lack of presence of the big offshore firms apart from TCS, no Cognizant, Wipro, HCL, or Infosys. Although they have significant revenues in India, this is still a relatively small market, and they have little elsewhere in the region, especially in the big markets like Japan. TCS has made bigger strides in gain a presence outside of India – with a sizable business in Japan and Australia. Wipro is second in the region, just off the bottom with success in Japan. Frankly, the key to scale in the region.

The large global integrators like IBM, Accenture and HP have never been as strong in Japan as the local players and so in spite of strong presence in China/Pacific are dwarfed by Fujitsu.

The biggest changes we expect over the next two years are the rise of more Chinese players – with firms like Digital China, Alibaba and Neusoft building on and offshore business. Additionally, we see AWS as a key player shortly, particularly given the recent investments made by the firm in the region with centers in India and Korea launched earlier this year.

Bottom Line: The AP market is poised for major change… but not just yet

There is still plenty of room for growth in IT services and BPO within the region. Particularly in emerging super economies like India and China – but the beneficiaries are likely to be local providers and international providers with a distinct value proposition – like AWS and its best in class cloud infrastructure. Although we anticipate stiff competition from regional champs like Alibaba.

The lack of success of the offshore firms in the region is mainly due to the reduction in their key value proposition – labour arbitrage. However, we may start to see other members of the Indian WITCH group rise the list as labor takes a less important role within the market and within these providers, some of which are making real efforts to develop “as-a-service” offerings that blend low-cost talent with automation capabilities.

It doesn’t really matter what part of the world we are in, the competitive landscape is pretty much being shaped by the same overriding forces – the endless client demand for productivity improvement, rapid technology adoption around client engagement and data, the drive to simplify infrastructure, whilst providing a more comprehensive service and the shift to more platform-based services. This means the criteria for success for the providers, particularly in the enterprise space will be the same. If anything when we survey Asian companies they are more progressive about technology adoption and business process change. So agility is the key differentiator for providers, the world over. Given the uncertainty across the world, we are sticking to our mantra: the main differentiators for any service providers is the ability to adapt to the market conditions and the capacity to deliver intelligent (and adaptive) solutions to clients.