When I was in college, I heard an incident involving Bill Gates and his comments about innovation in the automotive industry in the late 90s. Later, I found that Bill Gates comments were extrapolated and converted into a then very popular joke among automotive engineers. The irony is that joke is coming true now for car makers, but it is a good opportunity for engineering service providers.

Bill Gates: If the automotive industry had kept up with technology like the computer industry has, we would all be driving 27 dollar cars.

Automotive Industry: Yes, but would you want your car to crash twice a day?

And guess what? Two decades later, cars have become more like software and vehicle recalls have skyrocketed. 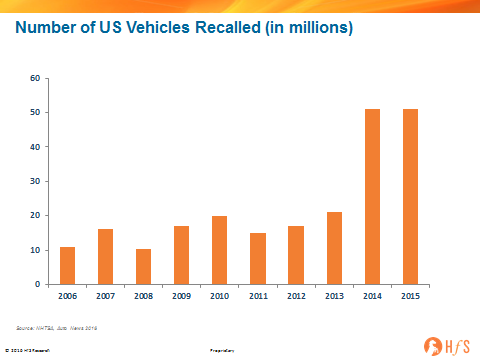 The above recall numbers are just for US but I am sure situation will be no different in other regions.

These recall numbers highlight there is something seriously wrong with the testing process. And one of the major culprits in recalls is software.

Beyond recall numbers also we have heard about disturbing stories in automotive sector such as the Volkswagen emission scandal, where the culprit was software. Even Tesla’s recent autopilot crash was related to software. As it turns out, the Tesla’s braking systems radar and camera may have failed to detect the tractor-trailer.

Where does this software code go in the car? It is in all the cool features, such as air bag system, anti-lock brakes, automatic transmission, climate control, communication system, dashboard control, engine control, entertainment system, power steering, etc. Also, the possibility of so many variants and consumer choices creates volume and complexity in car software.

The core expertise of automotive OEMs and tier 1s is mechanical engineering. They need help and external expertise in embedded engineering in design, development, testing, and manufacturing. The embedded software has been a growth driver, especially for Indian engineering service providers.

For car manufacturers, the pressure to push the products early creates pressure on testing. Now, amidst vehicle recalls, emission scandals, and auto pilot crash the importance of vehicle testing will increase further.

As software is eating up the car, the automotive industry needs all the help it can get in testing, verification, and validation. The testing requirements will only become stronger with self-driving cars. And we are still not talking about mass customization, where OEMs can design and manufacture car in the lot size of one economically. This will be a testing nightmare for OEMs but a goldmine for engineering service providers. (And don’t get me started on the fear of hacking and make you paranoid, but testing requirements will only increase!)

The major engineering service providers in the automotive vertical offer testing, verification and validation services. My observation has been that the current approach to testing is more at the compliance level. Service providers I talk to tell me that they help OEMs and tier 1s in getting certain certificates in few countries (the technical term is homologation). The providers want to be able to crow about their testing being recognized by OEMs and certification authorities.

This is all good and that’s why majority of testing outsourcing is being done. But today, we need to think beyond compliance level and instead think about how to prevent vehicle recalls, emission scandals, autopilot crashes and even support mass customization.

Service providers need to think what kind of testing services they can provide to the Teslas of the world. The compliance approach will be table stakes. How can they help Tesla in preventing another autopilot crash? (Read Lessons from Tesla’s Master Plan)

Currently, the percentage of the engineering services providers’ revenue from automotive testing is in single digits, which we think has the potential to go into double digits in the next few years if service providers move from compliance to solutions. This is no joke!

Posted in : Procurement and Supply Chain