IoT is only transformational to a point: we need to evolve to the Banking of Things to mine its true potential

There are already more mobile connections (over eight billion in 2016, according to GSMA) than people on this earth and some forecasters are already predicting we’ll have 20 billion devices or things connected in a couple more years.  Yes indeed, people, the internet of things (IoT) has truly come to life in recent months, and this is only going to escalate on a massive scale.

However, is simply having this obscene level of connectivity really going to have a transformational impact on us?  Won’t we reach a point of connectivity saturation where the net benefits almost become negatives in our lives, or will IoT be extended to true commerce and the banking of things?

Up until very recently, these discussions have been more science fiction than reality, however, a news item this week raises our hope that IoT will evolve in this direction and we can start talking about a world beyond mere prolific device connectivity.

IBM is partnering with Visa to offering Visa’s tokenization services to its IoT clients. Every IoT device or thing can be made a point of sales (PoS) terminal and be able to enable transactions itself, such as a car ordering spare parts and a refrigerator ordering groceries. (Read here.)

Aside from the operational complexities, analysts have liberty to think about future scenarios. We can visualize this evolution of things in two dimensions. In the horizontal dimension it is human, and different categories of things (industrial things and consumer things). In the vertical dimension, it is digital activities. It starts with connectivity and then extends to payment, commerce, and banking.

The mobile revolution has been providing connectivity to humans from late 90s. Now the era of connectivity of things has started. On the digital activity dimension, humans are using digital payments, digital commerce, and digital banking. 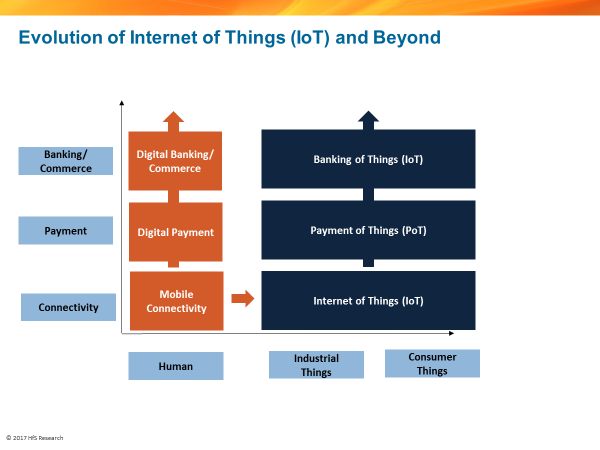 Internet of Things (IoT): Things have a unique identity by SIM, RFID or similar identification technologies and can be connected to each other by different communication technologies. Things produce data with sensors attached to them, which can be used for generating information and insights.

Payment of Things (PoT): Things have the capability of paying themselves. Things can do commercial transactions and pay automatically, without human intervention.

Banking of Things (BoT): Things have a legal and a commercial identity of their own and can bank on their own. They have their own existence and bank accounts. They can take a loan, generate revenue, make deposits and can do all commercial activities which humans do with banks.

The use case of banking of things could be a machine or a car, which is not owned by anyone, and it can have its own identity. Banks can give a loan to a machine and the machine can use it to pay its initial cost to the manufacturer. The user can use this machine and pay usage charges for the machine in its bank account. A single machine can be used by multiple users. The machine can pay interest back to the bank, pay for its own maintenance, pay for insurance, upgrades and can decide what to do with its profit.

Similarly, an autonomous car can benefit from the banking of things. A car can have its own identity. It can operate like a taxi and available on demand like Uber. But unlike an Uber cab of today, it will not have any owner or driver. Users can use them and pay charges to car’s bank account. The car can pay interest to the bank, pay for insurance, taxes, gas (or electric charge), maintenance, upgrades and can decide what to do with its profit. Combine this with artificial intelligence, the car can decide how to optimize its activities for maximizing profits. Combine this with robo advisors, the car can invest its profit for maximum returns. Combine this with blockchain, the car can enable smart contracts between passengers and cars.

Why is this important?

As noted in our earlier IoT research, IoT is real but not yet transformational. For transformational impact, IoT needs to be combined with other technologies and commercial activities. The IoT combined with  PoT and BoT can have transformational impact as discussed in earlier use cases. Earlier waves of mobile connectivity and its evolution have produced Uber, AirBnB, WhatsApp which decimated the business models of many industries. Even internet businesses of Google, Amazon, Facebook leveraged this evolution to consolidate and expanded their positions by dis-intermediating so many traditional business models. Now IoT and its evolution to PoT and BoT will have potential to disrupt many more business models and industries.

Bottom Line: IoT provides the initial building blocks and it will evolve to Payment of Things and Banking of Things to disrupt many more business models.

The service provider ecosystem can play an active role enabling enterprises in their journey towards IoT and beyond. Enterprises now need to embrace the Digital OneOffice more than ever to thrive in this era. There is a lot of advice enterprises can still use to prepare themselves for the future. So this leaves us with the next trillion dollar question: Can enterprises really bank on service providers to take them to the world of Banking of Things?

Posted in : BFSI, Digital Transformation, The Internet of Things