Meet Rajesh… in the flesh 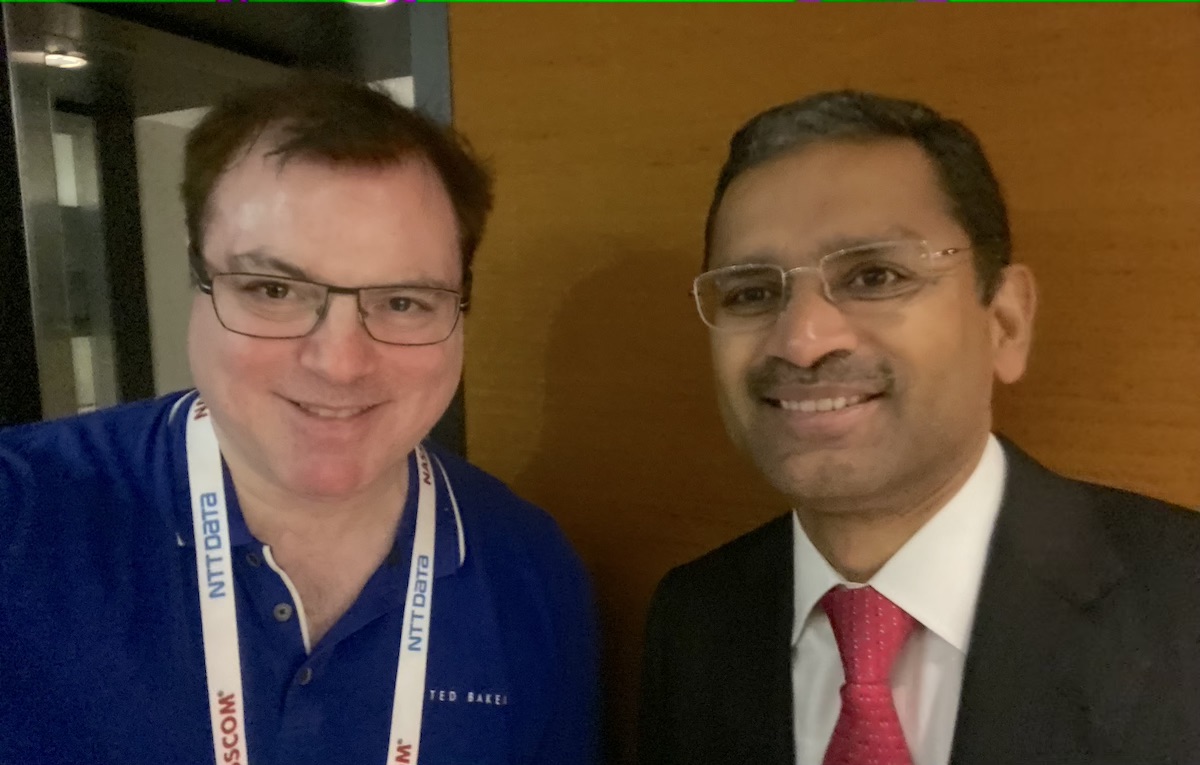 When the legendary Chandra moved on from his TCS leadership role three years ago, his successor had a very big pair of shoes to fill to lead, not only India’s most valuable company, but also to sustain its position as a truly global IT services heavyweight that could rival the likes of Accenture and IBM on any deal.  Step up Rajesh Gopinathan, a quiet unassuming man who had focused on designing the internal workings of the firm for 16 years away from the spotlight.

So when presented with the rare opportunity to get time with Rajesh at the recent NASSCOM event in Mumbai, we couldn’t resist grabbing the chance to get him to share some of his views with the HFS audience… no scripting, just straight from the heart. Within his words you’ll find his formula for success, key areas of focus, commitment to people, ability to engender both transformation and regeneration, all while maintaining a commitment to make technology work for its customers…. enjoy.

Phil Fersht, CEO HFS Research: Good afternoon, Rajesh. It would be great just to hear a little bit about you and your role at TCS, and how you’ve evolved in the company. Maybe you could just give us a little bit about your background, where you started out and whether you ever expected to be doing this job that you’re doing today?

Rajesh Gopinathan, CEO TCS: That’s an easy one, the last part of it. No. [Laughs]. I am an engineer by education; I did an MBA and then joined the Tata Group, and, pretty much, that’s been where I have been throughout. But I moved around within the group, worked in a few of the operating companies, and then the last 20 years have been with TCS. And, in fact, as is the culture in TCS, I have moved across multiple areas, so I’ve been in operations, I’ve been in sales, then I was in finance, and finally ended up in this current role. When I joined the company, we were less than $400 – 500 million, so it’s been a phenomenal journey.

The good news is all of us have worked together right from the beginning, so none of us quite knew what the future held, but it’s always been run by aspiration, you know? We saw the possibility, and we knew that this is something that can be attacked systematically, going after it one after the other. That’s the biggest part of TCS. Right? That we have all grown together, and different people are in different roles throughout. …It’s a unique company, to that extent; I don’t think, of this size and scale, there are too many around.

Phil: We talk a lot with clients about what got them here and the journey they came on for the last ten years to today. So, as you look at where you’ve come from, and where the company’s going, do you think the same formula is going to work for the next five years, that worked in the last five? Or do you think things are changing radically?

Rajesh: There are formulas that have worked for the last ten years which will continue to work in the future, and there are formulas that have worked which will not. The formula that has worked, and which will continue to work, is this unrelenting focus on the customer, and unwavering belief in our own talent. As long as you stay very close to the customer, don’t get too coy, or too ahead of trying to think that you know what’s better for the customer. Stay very close to the customer, stay relevant and be in cadence with them, one step, two steps ahead. I keep characterizing our business in this way, that, if you think of a product company, a product company, by definition, needs to be ten steps ahead of the customer. They need to reimagine what the future is. They need to think about the possibilities, and they need to take a bet on where the future will be. I would say a more management consulting-oriented company needs to be five steps ahead. It needs to have answers and frameworks for when a customer starts to think about things. A technology services company needs to be a couple of steps ahead of the customer. It should be ready to be able to provide the customer with a trusted place where they can experiment with the things that they want to experiment with.

These are three different business models, and you need to be clear in your head which business model you are operating with. So we have been very, very focused. It’s like surfing the wave. The waves will keep changing, but you need to define yourself as surfing the current wave. And, as the wave changes, you’ve got to keep on readjusting yourself. But the value proposition is unwavering in its focus; it’s to make technology work for our customers.

Phil: Rajesh, do you think there’s a distinct shift happening, from technology change to culture change, to business change?

Rajesh: That’s an interesting way of putting that question, Phil. From a technology perspective, there was a period of massive heterogeneity, and now it’s coalescing, which has been the nature of technology. It keeps getting compressed; therefore, we need to equip ourselves to be able to deal with it again and again. So the way we think about it is, every time we hire a kid out of college we believe that the person will have a 30-year-plus career with us. So, with the speed that we are going, you are going to see three, four, five, eight cycles.

We have to be able to make sure that we can get our talent through each of those cycles. How do we build both the culture for that, as well as the infrastructure and the systems? That is the focus, so we massively invest in training. This last time around, we have taken a very fundamental relook at our training infrastructure. We have always been leaders on training, but we have built up a training infrastructure which was optimized for the last generation – large training campuses, classroom training, a course curriculum, three-month training, three-week training, those kinds of areas. About five years back, we started relooking at it. We said, “How do we break this up and align it to the current learning culture which is more tool based?” So massive changes. We broke down the course content, which was more aligned for this kind of push training, to be more pull-based. We changed our learning management system. We were on an off-the-shelf product; we threw it out and rebuilt our own training management system, completely reimagined it, gamified it and integrated that with our social platform internally, called Knome, that’s similarly gamified.

We changed the infrastructure. It’s a cloud-first, mobile-first approach, it’s available, on the fly, anywhere.  So across, you know, seven, eight different dimensions of learning, we completely changed it, and scaled it massively. We’re talking around 300,000 people being trained in 12, 18 months. So massive changes. So, it’s not just culture; you’ve got to back it with infrastructure and with the systems to be able to do it.

People are inherently open to change.  There’s a saying that we use: There’s a flood. And as floodwater started going up, all the people got on top of a building. And there was a very god-fearing person. So, as the floodwater rose, a boat came along. A lot of people there jumped down and got into the boat, but this guy said, “No, no, God is going to save me,” and waited. The floodwater increased. Then a raft came along, quite a few people were on the raft. They said, “Come on, jump; we’ll take you along.” Most people left. The man said, “No, God is going to save me.” The floodwater kept on rising. A log came around, with four or five people hanging on to it. They said, “Jump. We’ll go together to safety.” “No. God will save me.” Finally, the floodwaters got to him; he drowned. He goes to heaven and says, “I was such a god-fearing person, and how come, god, you didn’t save me?” God said, “I sent you three saviors that you didn’t use.”

The individual has an onus to change. And the organization has a commitment to make sure that it won’t sink. But that jump has to be done by the individual. So that’s the culture that we’re building internally, that change is inevitable, but it is something that we as the business will facilitate, and there is a lot of emphasis on retraining.

Many organizations, Phil, when they think about talent, it is something that is going to come from outside, they create a sense of fear internally. We have a very supportive culture, and it gives us the ability to regenerate internally, which puts us in a unique position because we can then retain knowledge, and acquire the new knowledge. Knowledge is not something to be used and thrown away. It is to be invested in. Our retention rates are the highest in the industry – that’s our biggest competitive advantage. We are almost 10 percentage points ahead of the competition on retention, and that’s where our advantage comes from. We are very focused on that.

Phil: If you had one wish – from God – to change the services industry for the better (beyond salvation from floodwaters), what would that wish be?

Rajesh: Slow it down a little bit, [Laughs] and give a bit of breathing space.

I think that’s about it. But, to some extent, it’s self-correcting. Unlike consumer tech, enterprise tech needs to work in the context of what exists. And new technology comes, by definition, not from the people who understand how to make it work. So, before technology gets permeated inside an enterprise, there is a real physical lag, and that is the period of time that you have to scale it up. And the fact is that, if it is not scaled up, enterprises cannot use it. You can’t just infinitely change technology at an enterprise level the way it happens in the consumer [space]. At least that’s the belief that I have.

We need to find what that sweet spot is. But we will, we can – we can afford to change faster than what we are changing today. We are not in a situation like processors or memory where you are constantly on a collapsing timeline. I do believe that we have some physical boundaries that we can rely on.

Phil: Well, thank you very much, Rajesh. It was wonderful to hear from you for the first time here. Am sure our readers will be very excited!