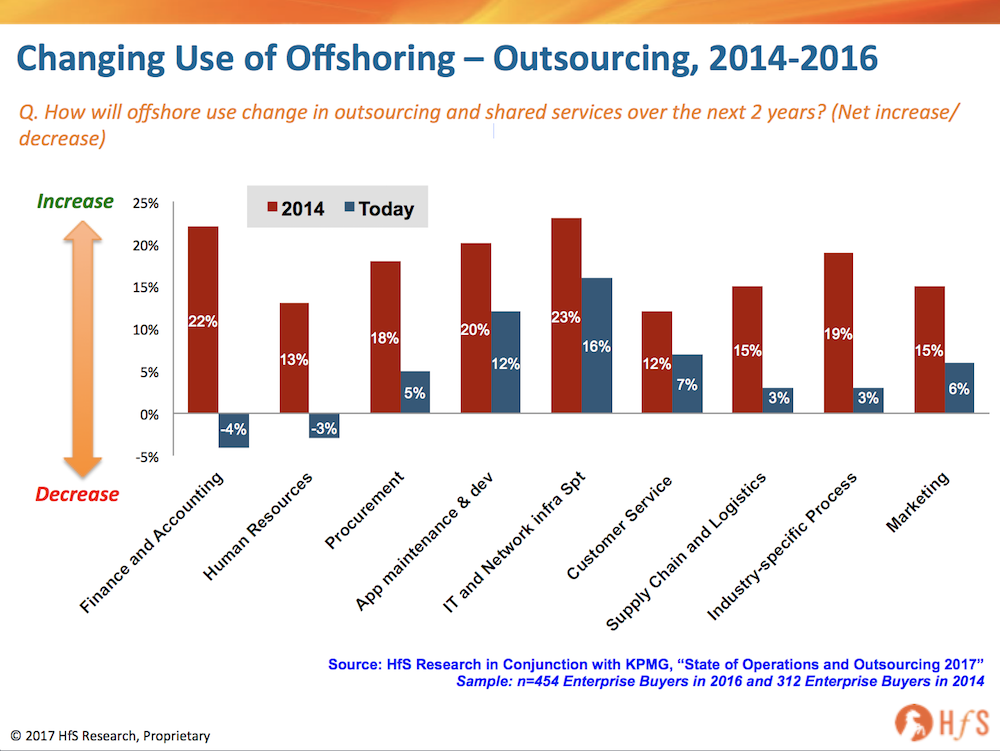 In the post-digital world, no one cares much about “offshore” as a strategy – it has become part of the fabric of managing a global operating model, where operations leaders just tap into whatever global resource they need to achieve their desired outcomes. This doesn’t mean that traditional “offshore” global delivery locations, such as India and the Philippines, are going bust overnight. But it does mean the playing field is leveling out as the need for emerging skills trumps the desire simply to reduce labor costs.

Our new State of Industry Study, conducted with KPMG (see above) of more that 450 major global enterprises – shows an increasing majority of customers of traditional shared services and outsourcing feel they have wrung most of the juice offshore has to offer from their existing operations, and aren’t looking to increase offshore investments.  When we compare enterprise aspirations for offshore use between the 2014 and 2017 State of the Industry studies, we see a significant drop, right across the board, with plans to offshore services. Organizations are now either looking to make their existing offshore operations more effective, or even reduce them where they can (especially in F&A and HR), using new technologies and smarter process management.

It’s all about future scalability without the linear resource investments

The difference between new style of automation-rich intelligent operations and offshore-centric traditional operations is growing. It’s a bit like comparing the growth of Walmart to that of Amazon – (although it has started to change with its belated online strategy and acquisition of Jet.com), for many decades, the success and growth of Walmart has largely been tied to selling more retail products by continually adding new stores, and continually increasing its supply chain to support them. The firm could produce a linear business forecast that tied revenues to employees and capital infrastructure investments. Expansion and profitability was always dependent upon investing in more people to service need of the increased clientele – both the end customers and suppliers. With Amazon, so much of the customer front end is intelligently automated, adding customers often requires very few additional labor or capital investments – most front line customer support is completely automated, most the point-of-sale promotions are entirely driven by cognitive tools and smart algorithms that tie together customer needs and preferences with all the products on offer.

It’s the same dynamic that is impacting the use of affordable offshore people services to be augmented, or even replaced by the almost-free fruits of intelligent automation. While Walmart was always an attractive outlet to push products to market, suddenly that business model is no longer viable when you can push your products to customers without the need for new investments in capital infrastructure or staff.

The emerging brand of more packaged operational services, outcome based services, and As-a-Service offerings – will be much more location neutral. It just doesn’t matter as much to the client where the service is delivered – they will only care if they have a reason to, like compliance, latency, etc… It’s not dissimilar to what’s happening in manufacturing – over the last 20-30 years, it made a load of business sense to displace, for example, 5000 onshore factory workers with the vastly cheaper services on offer in locations such as Taiwan and China, but as manufacturing automation advanced, the same products could be made by 100 workers managing machines. It gradually became more cost effective to bring the work closer to where end customers were situated to speed up inventory replenishment and reduce transportation costs. Why is it any different with finance, or procurement or HR – wouldn’t you rather have support services that were more culturally aligned with your staff and had a better understanding of your business needs?

You could argue that this dramatic shift is caused by automation or a desire for organizations to have more control over parts of their operations. We’ve seen examples of large organizations growing on-shore application development teams, partly because they need additional resources given the increasing numbers of complex customer-facing applications they are designing. But also because the applications needed to address onshore customer needs more directly – with greater personalisation and cultural affinity.

Offshore provides truly effective applications teams in terms of speed of development and technical quality of the final applications, but is less able to deliver the wow factor needed for the digital economy – especially in areas that require cutting-edge design and alignment with emerging digital business models. Also DevOps environments and agile have made on-shore development more cost effective and help deliver the same disciplined development ethos offshore has delivered. This does not mean that application development and maintenance disappears from offshore – far from it. It just means that services being delivered will be from more globally diverse teams and are more outcome-oriented, with offshore services leading the compliance / technical quality aspects of the delivery – at least for applications.

However, we think this is only part of the story, particularly as you move into other process areas, where there isn’t a hugely creative element and the service can be better delivered through automation as processes are standardized (such as back office F&A, HR and Procurement).  In addition, areas where cognitive tools and virtual agents are emerging are also slowing the need to add bodies offshore, where self learning systems are really starting to work effectively. This is where the real change lies.

In the post-digital world, no-one care’s as much about offshore anymore. Offshore is going to be an ever decreasing part of the consideration for operational managers and their C-Suite. Location will still play its part as a cost lever in some circumstances – but it’s becoming a side issue, in most cases. Service is becoming outcome-led and driven by automation – people will add flair and handle exceptions – the HfS/KPMG survey shows that they aren’t thinking about it as an issue. It is either an ingrained part of a legacy operation, which is shrinking over time and a component of a more streamlined automated, As-a-Service delivery model. However, what is clear, is the need for skills to drive business outcomes, and if those can be found offshore, that is a bonus, but not the deciding factor.

The Indian IT/BPO services majors should also be more concerned by President Trump’s stance on outsourcing than any other factor over the last 20 years. Not only is offshoring of IT and BPO slowing because of lessening demand, but increased political pressures and policies being driven by the Trump leadership are completely changing the game. When it comes to IT services and BPO, it’s no longer about “location, location, location”, it’s now all about “skills, skills, skills”.