Infy procures Portland to soup up its sourcing 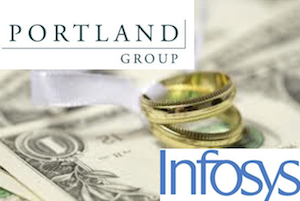 Do you procure this Australian as your lawfully wedded category specialist?

As we discussed recently, these are pivotal times for Infosys’ BPO division, as it looks to surpass half a billion greenbacks in revenue this year.

And when you look at the overall performance of Infy’s development in BPO, surprisingly only a third is coming from the foundation horizontal of most traditional BPO providers – finance an accounting.  Impressively, Infy has developed its strengths in less mature BPO markets, such as financial services and, surely the jewel in its recent performance, sourcing and procurement.

With its sourcing and procurement (S&P) practice up to $40m this year – not an insignificant size in this immature market, especially when you bear in mind they have built this service line from practically nothing in four years – Infy has made its first substantial investment in the sourcing and category management space, picking up the lead Australasian provider Portland Group for $37m.

Why is this significant?

Pits Infosys firmly against Accenture and IBM in the Australasian markets.  Portland has 42 clients, including two of the four major Aussie banks, a major airline, some oil and gas companies and a major retailer.  Previously, Infy’s only major client in the region was Rio Tinto.

Gives Infosys significant sourcing expertise.  Only a third of Portland’s revenues are derived from managed services (indirect procurement). The rest comes from strategic sourcing and category management services, which is exactly where Infosys need to invest to move up the sourcing value chain.

Gives Infosys considerable cross-vertical expertise.  With the many of Infosys’ competitors’ businesses centered in semi-conductor, hi-tech and manufacturing clients, this acquisition branches into other verticals where sourcing BPO is still nascent, such as retail and transportation.

The Australasian market is in high growth mode with BPO.  HfS sees considerable opportunity for providers such as Infosys to take advantage of the growing ANZ market for BPO services, which is in a similar position to the UK market a 3-4 years’ ago, before it took off.  Moreover, having a strong footprint in ANZ should make it easier to go after deals from the pan Asian multi-nationals headquartered not only in Sydney and Melbourne, but also Singapore and potentially even Hong Kong.

The Bottom-line: Infosys now raises the sourcing game, but needs to look at further acquisitions to compete globally

Infosys now boasts a plethora of impressive brands under its S&P BPO portfolio, which include the likes of Verizon, Caterpillar, Charles Schwab, Rio Tinto, BP and a couple of major pharma. However, in order to increase its percentage of sourcing work over lower-value indirect procurement services, it needs to acquire more niche providers like Portland in other geographic regions, such as the US, China, the UK and various continental European countries. It’s very challenging to hire and train sourcing experts, hence acquisition is the logical way forward to grow quickly in the S&P market.  Infosys already has 30% of its S&P staff located outside of India, and we anticipate this ratio may need to grow as high as 50% if the practice continues to expand at this pace – something of a cultural shift for the Indian headquartered providers.

We expect Infy to pass $100m in sourcing and procurement next year, and there are a number of niche sourcing specialists it can consider to fill out the global portfolio.  The big question now is whether Infy’s top brass stop here, or whether they have the appetite to keep investing.  The next six months should prove very telling.

Related post: As InfosysBPO reaches the $500m mark, is it ready for the big-time?