Last week (see post) we revealed the true impact of the emergence of Intelligent Automation on the global industry of 15 million IT services and BPO workers, revealing a net decrease of 9% and ~1.4 million jobs.

The workers within the worldwide industry have been divided into 3 categories: low skilled, medium skilled and high skilled. Low skilled workers conduct simple entry level, process driven tasks that require little abstract thinking or autonomy. Medium-to-High level workers undertake more complicated tasks that require experience, complex problem solving, ability to learn on-the-job and to work autonomously. The model then applies underlying growth rates for each category linked to market growth. Each scenario has a different set of parameters that will impact each level of worker setting out likely degree of automation for each group and the probability that the job will be automated and in what time frame this is likely to happen. You can read a fuller description of our methodology for our future workforce impact model here.

So what does this look like when we drill down to the country levels of the main global delivery locations:  UK, US, India and Philippines?  Let’s start with the low-skilled positions, greatest at risk from robotic process automation (RPA): 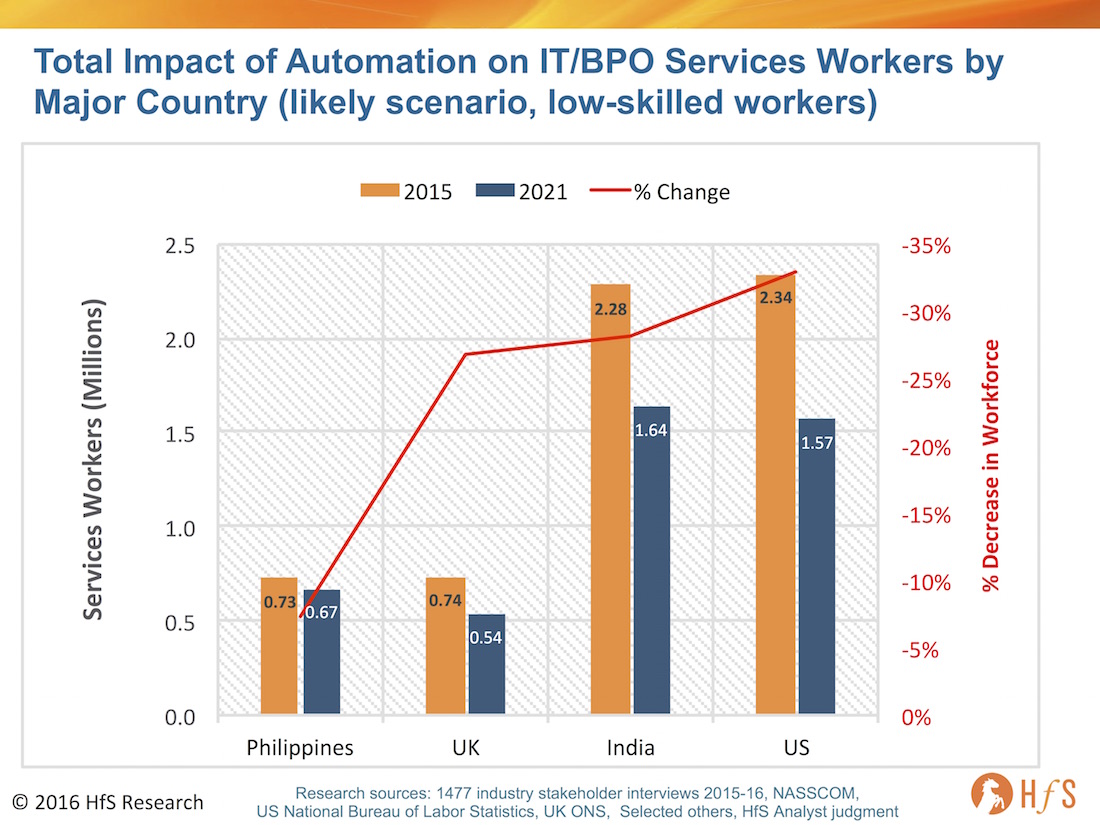 As the graphic illustrates, India is set to lose 640,000 and the US 770,000 low-skilled positions by 2021 – these are decreases of 28% and 33% respectively. This is largely because there are a large number of non-customer facing roles at the low-skill level in these countries, when you take into account the amount of back office processing and IT support work that are likely to be automated and consolidated across a smaller number of workers.  On the flip side, the Philippines is expected to be the least impacted, due to its heavy reliance on voice-based customer support and high-touch healthcare operations work undertaken – and the location’s reputation for low-cost, high-quality services. The UK has a very large customer service call center industry, in addition to IT and back office clerical processing work, which protects the impact somewhat, but we still expect the impact to be high at the low-skill end (200,000 jobs at 27% decrease), especially with uncertainly over Brexit expected to drive enterprises to source to alternative locations.

Philippines, UK and India set to benefit the most from medium/high skills job creation by 2021

The whole counter-argument to job losses caused by automation is the new work created in the future to focus on higher value work.  In addition, most of the low-end skills jobs are not being created in any case, hence many workers will be challenged to migrate and evolve their skills to take on roles with higher degrees of complex problem solving, autonomy, creativity and emotional intelligence. Based on the make up of the workforces, education levels anticipated service delivery work, we expect the Philippines to make the move higher up the mid/high value skills value chain (48% growth, albeit from a low base), the UK creating 131,000 new services jobs at 16% growth, India 160,000 at 14% growth and the US lagging with 7% expected growth at 173,000 new jobs: 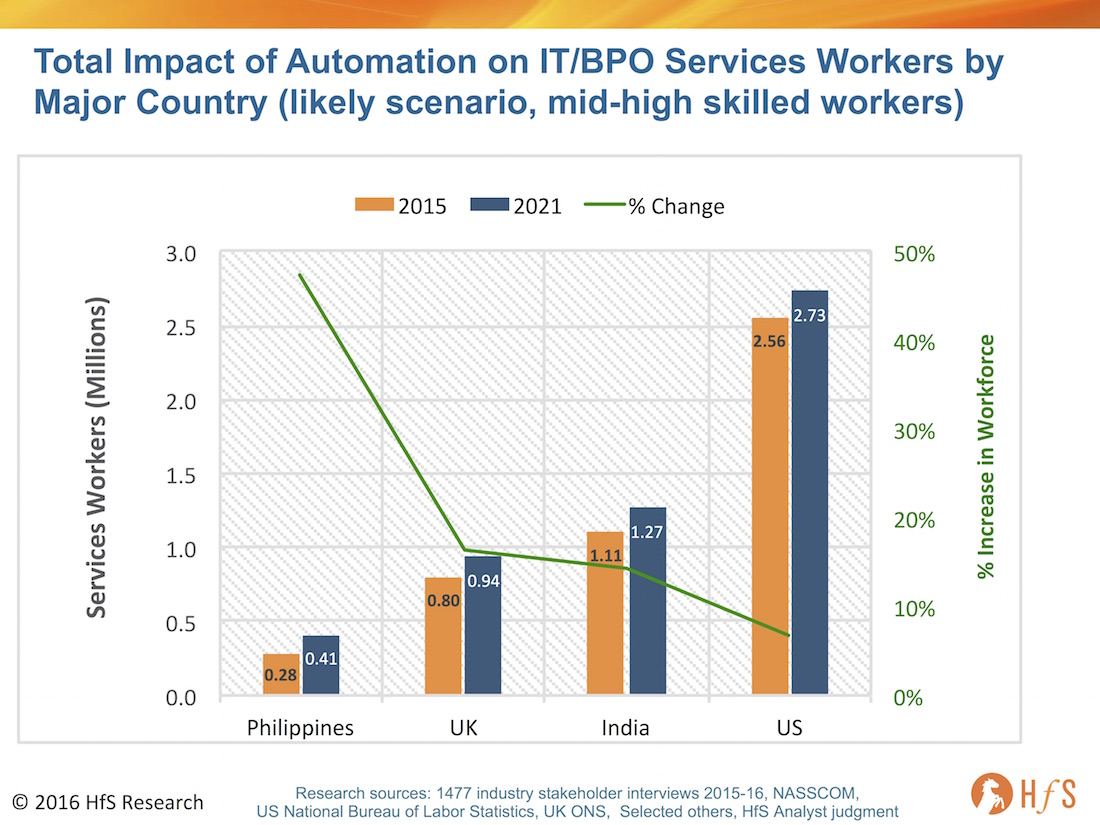 So what impact is all this having on the overall likely scenario to these countries’ service delivery workforces?

Overall, India’s services industry set to endure the largest negative impact with a 14% decline in its workforce 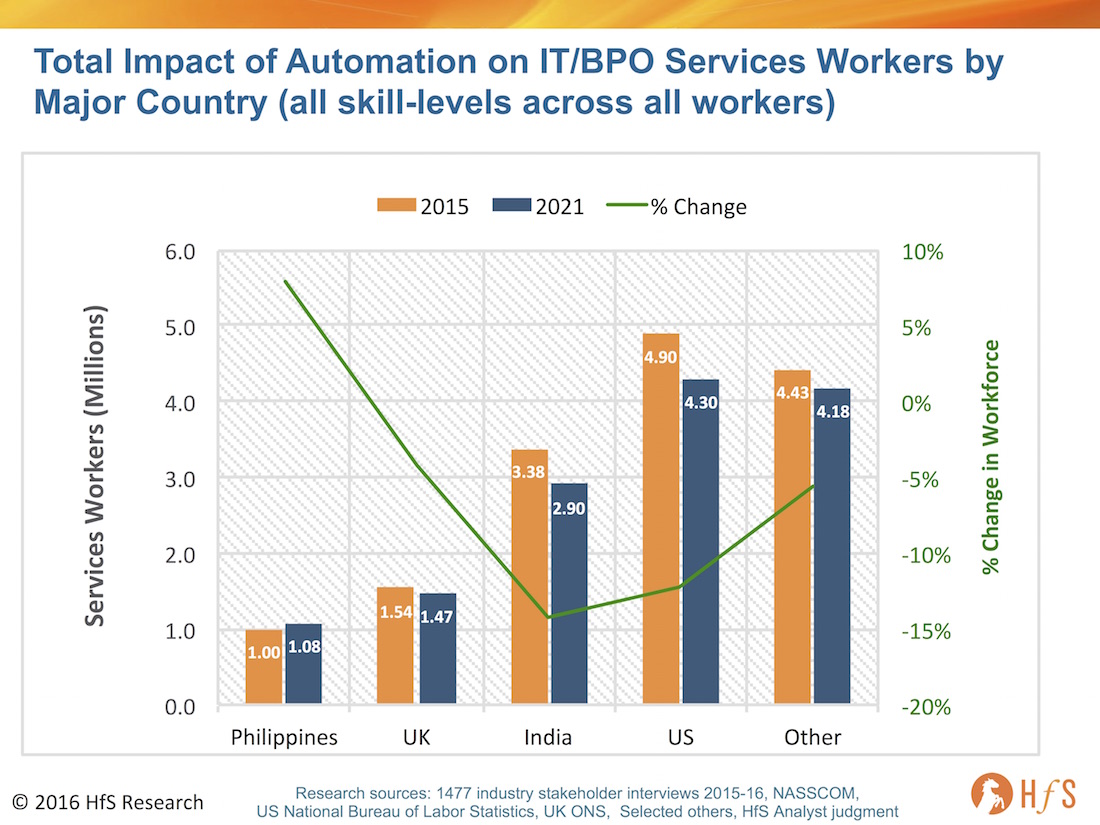 The US service industry is also expected to suffer a notable decline with 12% total workforce reduction, with the UK at a more modest decline of 4%.  The Philippines is actually expected to increase overall by 8%.

The Bottom-line: The advantage will go to those nations investing in the next waves of opportunities, not those stubbornly resisting innovation and obsessively trying to protect legacy business models that won’t be around in another decade

The good news is that the impact of automation isn’t about to have the Armageddon impact many outlandish futurists have predicted.  However, I am not going to sugar-coat the impact advances in both automation an digital technologies are having on workforces, which struggle to change with the times. Enterprises today, which need to expand their operations, are not always going to look at extra headcounts to do it – if they need more insurance clams processed, they will want to ensure they have a platform in place to scale for the extra work (whether inhouse of with their service partner).  If they have greater IT infrastructure management needs, they will look to better cloud-based orchestration tools to manage them.  Simply put, the services industry grew up through more enterprises out-tasking work that was largely conducted by people. Now, the onus is shifting to using only people for tasks that require human skills that cannot be replicated in a piece of software – and this trend is snowballing as more tools for RPA and autonomics management are being widely adopted by enterprises and service providers alike.

The service providers cannot mess around here – their very competitiveness is at stake and they have to adopt Intelligent Automation aggressively if they want to remain viable and competitive with ambitious clients. This is creating a serious, significant issue for governments of countries with a heavy reliance on its workers providing outsourcing services for Western enterprises.  India has enjoyed hyper-growth in its services industry for over two decades now, and this is the first time a decline is now setting in, in terms of worker numbers.  Its leading service providers will maintain high margins for several years to come, but their growth through linear employee scale addition is on the slide. Half a million workers to be re-employed elsewhere is a large number, not the mention where the armies of “freshers” leaving the colleges are going to go.  And let’s not forget the low-skilled employees not willing/capable of learning new skills and new ways of working.  Meanwhile, the focus on affordable, multi-lingual customer work has been a masterstroke for the Philippines government, while the UK similarly benefits from a robust call center economy – industries core to their strengths in numbers.

In short, India needs to focus on new avenues for services job creation where it has strength in numbers and strength in potential.  Engineering services in a bright spot, and so is analytics, with their being such a proficiency for data and technology from its services talent.  Moreover, India has a very strong competency for process and, believe it or not, automation capability.  So why not become a leader in helping clients access better data from better automated processes?  Yes, the next five years will be the painful ones for India as we go through this transition from people to technology-plus-people services, but the five after that could well be a different story as enterprise crave more human-centric skills at scale that can’t be fed into a software object recording or SaaS platform. These are challenging times ahead, but where there is change these is always opportunity – and the advantage will go to those nations investing in the next waves of opportunities, not those stubbornly resisting innovation and obsessively trying to protect legacy business models that won’t be around in another decade…