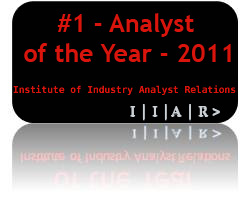 HfS Research is the Analyst Firm of the Year for Outsourcing, while Phil Fersht scoops Analyst of the Year

For some reason, people keep insisting on giving us accolades for being cranky, irritable and disruptive influences on the services industry.

However, the awards we received today (see link here) are an unbelievable validation of our team’s hard work from the International Institute of Analyst Relations (IIAR) – and proof that we’re not just a “flash in the pan” in the industry analyst business.  IIAR’s awards are widely recognized as the foremost accolades in the analyst profession, with such a large number of analyst-facing professionals providing the votes.

Today, HfS Research won the individual award for “Analyst of the Year” for a second year in succession (some individual called Phil Fersht now sporting an ego so insufferable, it’s rumored he can’t even stand his own company).

In addition to the individual analyst award, HfS Research topped the charts for “Outsourcing, BPO and Maintenance Analyst Firm of the Year“.

And this time, HfS Research was a runner-up for the overall “Analyst Firm of the Year”, behind the formidable Gartner.  Over 260 analyst and influencer relations specialists took part in this year’s survey – by far the greatest number to date, who voted on all the major research analyst organizations, such as IDC, Forrester, Ovum and so forth.  According to some of the participants’ entries, success factors included, “intelligent people with common sense”, “Research that is always compelling to read – and our clients like it” said another. One participant went further saying of HfS, “They are the heartbeat in the world of outsourcing and shared services”.  My word – has the world gone mad?  We’re just a poky 14-analyst set-up where we still re-use our teabags in the morning and have to share two Men’s Wearhouse suits for client meetings (we got the second one free…).

When we won the prestigious IIAR “Analyst of the Year” award last year, it was great to get some recognition for our hard work, but many people sniggered behind our backs that we would fade away pretty quickly.  However, to retain that award this year, and also win the runner-up for “Analyst firm of the Year” is a validation that HfS Research is about to enter its third year in operation, with a strong mandate from industry that people are getting some value from our research, love our accessible model and the fact we can provide real data on industry dynamics practically as the happen.

Anyhow, we would like to offer anyone who voted for us a cocktail on us when you see us at some upcoming conference, which we will be able to pay for out of the 20% price hike we’re gonna add to our services.

Thanks again – we really appreciate all the wonderful support, accolades and banter as we rumble into a third year of operations.