Defying disruption, or a ticking HR time-bomb? How TCS reduces its average cost per employee by 6.3% each year

When we recently calculated the profit margins of top IT service providers in our HfS IT Services Top 10, it was very apparent that TCS enjoys the highest profit margin, by a considerable distance, of 28.4% among the top 10 global IT services providers and also among the leading offshore centric IT service firms. Hence, not only does TCS enjoy the highest revenue growth in the IT services industry, it is also the most profitable – so what’s the secret sauce?

In a world where there is constant downward pressure on services pricing and there is increasingly availability of disruptive alternatives that should begin drive down the reliance on an FTE-based delivery model, how – on earth – does TCS do it?  So we asked HfS Principle Analyst Pareekh Jain, to take a deeper look, and it was quickly apparent that the firm has increased its proportion of “freshers” (recent college grads) has increased from 50% to 80% since 2007: 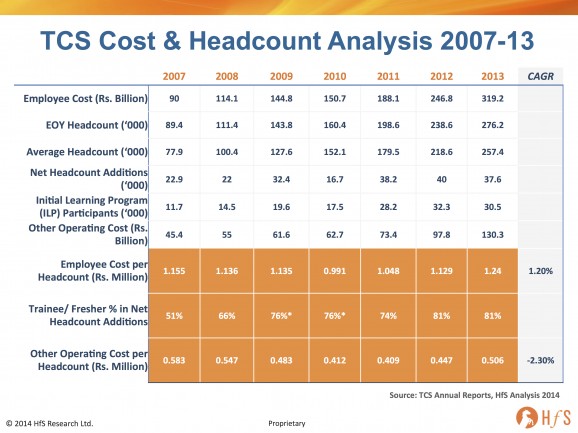 The interesting metric to analyze is employee cost per headcount, which has grown from Rs 1.155 Million in 2007 to Rs. 1.240 Million (US $21,200) in 2013 – an annual increase of just 1.2%. This is an outstanding achievement given the high wage hikes in India and other countries. A conservative estimate of 8% annual wage hike in India, 2% hike in developed countries and 4% hike in other developing countries will lead to about 7.5% weighted average annual wage hike for TCS mix of employees.

As shown in the following exhibit, TCS has effectively achieved 6.3 % reduction in average employee cost every year. This is one of the secrets of profitability model of TCS: 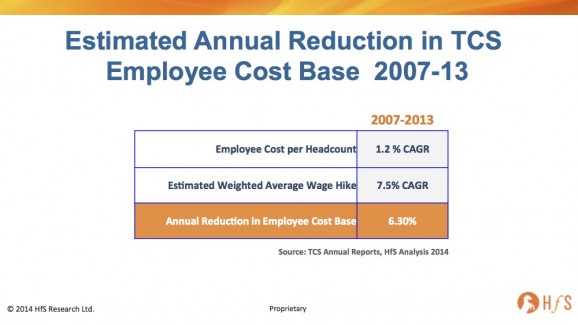 Pareekh, the data shows the percentage of freshers increasing from 51-81% from 2007-2013 – which appears to be the primary reason for maintaining this low headcount cost. How does this increase in freshers impact the overall TCS business, in terms of the type of services it offers clients?  While it clearly increases the cost-effective scale of delivery it can offer clients, does it broaden the scope of services, or limit it to more transactional activities?  (i.e. are they investing more in the “top and bottom” of the firm and removing the fat in the middle?)

The increase in percentage of freshers impacts service mix in TCS  in two ways – Firstly, hiring more freshers gives TCS the flexibility to deploy them in lower value and transactional activities thus freeing other high calibre experienced resources for higher value work. Secondly, training freshers for new skill is easier than retraining old resources for new skills. Thus the increased fresher mix gives TCS the  flexibility for cost effective and faster scale-up in new services as well as scale-up in higher value added services. For example,  TCS can scale faster and cost effectively in SMAC  with freshers, than scaling up with old resources. On the  flip side, the increased fresher mix has potential to cause disruption on existing projects. So far TCS has managed its projects well, which is reflected in their repeat business from over 90% of their existing clients.

Yes, TCS is investing more in the “top and bottom” and removing the fat in middle. While this move is good for profitability, it has medium and long term HR consequences. With disappearing middle layer the growth path of employees will be uncertain. “Top and bottom” structure in TCS and other IT firms could become similar to the structure in management consulting industry with “up or out” policy. The middle layer in management consulting gets absorbed in industry in either operations or corporate planning roles but in IT there will be no such large scale opportunities. As long as IT services is in the strong growth phase, overall there are opportunities for all IT services professionals and  party can go on. The moment the growth suffers, the Indian IT industry will find itself sitting on the HR time-bomb.

It appears the profitability endurance is much more tied to controls over labor costs, than advances in delineating headcount from revenue. Is this correct, in your opinion?

Yes absolutely. The control over labor costs had significant impact on profitability, whereas delineating headcount from revenue had very little to no impact. There are two reasons why delineating headcount from revenue had not had any significant impact. The first reason is that over all share of delinked revenue is very small. For example in 2013, the revenue from asset leveraged solutions (the non-linear revenue) for TCS was only 2.7% of total TCS 2013 revenue. The second reason is that the growth in headcount-delinked revenue had not been consistent. For example, TCS had negative growth in  asset leveraged solutions in 2013. The asset leveraged solution revenue declined by 9.5% in 2013 in comparison to 2012.  In my opinion we are few years away when headcount-delinked revenue starts showing any significant impact on profitability.

On a related note, there are different management challenges in managing headcount delinked revenue which IT service providers are not able to overcome  effectively. Last week,  Infosys has formed a separate subsidiary for products, solutions and platforms (PPS) called Edgeverve Systems. We don’t know whether this is an isolated case or it will be the trend and other IT service providers will follow this separate subsidiary path for products and headcount delinked revenue.

How, in your opinion, is TCS able to maintain the highest growth AND the highest profit margins of all the Indian majors? Surely its competitors can simply copy the model?

TCS is very competitive on pricing and it tries to manage its costs instead of price increases. From 2007 to 2013 the average revenue per headcount only increased annually by 0.3%.

However, TCS was not the profitability leader among Indian IT services majors few years back. The gap in profitability between TCS and its peers has grown recently as the firm has increased its scale. TCS was able to beat Infosys in profit margin from Oct 2012 only (prior to that, Infosys was profitability leader among Indian majors). The profitability levers we discussed in our TCS study are adopted by all Indian majors, but the difference is in aggressiveness and execution. For example, TCS is most aggressive among Indian majors in using Tier II and Tier III cities. It is constantly scouting for Tier II and Tier III cities and developing facilities to provide future capacity of 8000-10000 FTEs in each of these new cities. We have not been able to compare freshers percentage among the new hires across Indian majors because of lack of credible freshers data, but we believe that TCS will be the most aggressive of all the Indian majors.

Finally, it is the cycle of high growth and high profitability which is complementing each other in TCS’ case. Because of the high growth, TCS can afford to use both new facilities with economics of scale in Tier II and Tier III cities without disruption to its existing centers, as well hiring more freshers without letting go its middle-level employees. This, in turn, increases the profitability of TCS, and TCS can offer aggressive pricing for both in services to new customers as well as in cross selling opportunities with existing customers. The aggressive pricing increase growth further and the cycle goes on.

Pareekh, many people argue the Indian model will eventually breakdown as the firms cannot move away from the FTE driven model, and new advances in areas like automation, and Cloud platforms will disrupt the way the services are priced and delivered – and the intensity of labor needed is simply going to reduce.  However, I would argue that several of the leading Indian providers are as well placed as any of the Western providers to take advantage of these disruptive technologies to break the linear model. What’s your view point in on this?

Capability-wise Indian service providers are at par with the western service providers and can offer automation and cloud based business models. But whether they will do it is another question. Historically, disruption in any industry it is not led by the incumbents.The incumbents have vested interest in maintaining the status quo, or a slow growth in disruptive innovation, so that their existing revenue streams are not cannibalized. Kodak didn’t suffer because it had no capability in digital photography, more its failiure to see the speed of transition to digital photography – and it didn’t refocus and reorient its large profitable film business in time. In the IT services industry, the last major disruption was offshore outsourcing, which was led by India based service providers. The India based service providers scaled so fast that the western providers were left playing catch up (and many failed).

Similarly I feel next disruption of automation or cloud based solutions in IT services could be led by the new breed of service providers which can adapt and scale so fast that the existing incumbents (both Indian and western providers) will be left dying on the vine.

And finally, Pareekh, how about that Indian election?  How will Modi impact the services industry?  Is this a good thing for the industry, in your view?

The victory of Modi and the BJP is very positive for India and Indian economy, however, for IT services it will be a mixed bag. In last couple of days, Sensex has shot up and the Rupee has appreciated. It is believed that there will be strong bull run in Indian economy, driving the Rupee to appreciate further, negatively impacting the profitability of the Indian centric service providers 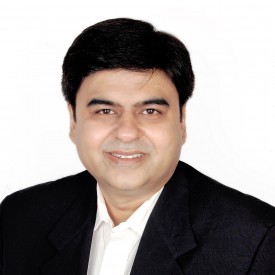 On the positive side, the economy is expected to be back on track. The policy paralysis of the previous government has led to the slowdown in new projects and foreign investments. Now new projects will be implemented  and foreign direct investment will increase, which will stimulate growth in the domestic IT services sector.

Overall growth in the economy will remove many supply side constraints – better power and infrastructure with improve the business environment in Tier II and III cities, which, along with greater tax stability, should be a catalyst for IT services growth. So far the BJP ruled states – Gujarat, Rajasthan, Madhya Pradesh, Chattisgarh and Goa have been laggards in  becoming preferred IT services outsourcing destinations, however, with the BJP government, I expect more IT services attraction in Tier III cities in BJP ruled states, such as Jaipur, Ahmedabad, Indore, Goa, Raipur and others.
‘

Thanks for your insights, Pareekh.  Readers can download their complimentary POV article entitled, “Decoding the Profitability Model of TCS”, by clicking here.