Here are our Autonabilized 2015 HfS predictions 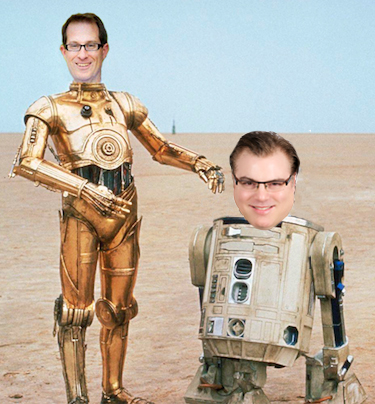 Hey – that’s actually not a bad idea, so why not throw a bunch of trends from the HfS analyst team into a cognitive application, add some robotics technology to mix them up with some humanoid analyst mimicry, and see whether the outcome could quite feasibly have been the product of some big legacy analyst house.

So without further ado, here are 17 predictions that will all come true.  Just for you…

Suddenly, labor-arbitrage deals are good things for society. At least jobs are being created somewhere in the world, as opposed to being eliminated altogether by robots.  This shift from “Labor to Digital” takes center stage across the whole operations, consulting and professional services industry.  Outsourcing will no longer be a dirty word, as enterprises realize the digitization and robotization of business and IT processes is the only real lever to pull to provide them with future value and efficiency. However, this will create a level of fear and uncertainty much more intense than the old worries about having your job shipped off to India.  “I’ll be back” becomes the watch-word of anti-robotics protestors, as those haunting words from Arnie’s 1984 Orwellian classic come back to bite us.

With Robotic Process Automation (RPA) becoming more central to the strategy of BPO service providers, we think 2015 will be the year that a few BPO service providers institutionalize their RPA capabilities and decide to cannibalize the revenues of their existing FTE contracts in order to encourage the end to end transformation of their own businesses. This strategic retrenchment using automation and cannibalizing revenues is what we refer to as “autonabalism”, and a few bold and forward thinking service providers will be undertaking this next year.

Those traditional providers which fail to autonabilize their models, will come under increasing threat from the emerging wave of specialist As-a-Service providers, which can deliver standard processes enriched with value-added services at much lower cost, and easier “plug and play” capability.  Examples already include the likes of OneSource Virtual, Aasonn, Genfour, Bluewolf, Fruition, Symphony and CloudSherpas.  We also predict that we will see new BPaaS-driven firms spring up that have not even be formed yet.

4. Focused service providers will decide definitively where they want to play to survive

It’s nearing crunch time for service providers and those which haven’t figured out their game-plan are going to fade away pretty fast.  Heritage providers have to make brave divestments and investments to stay ahead of the curve.  2014 already saw IBM sell off its CRM BPO business, HP split up its broader business, Xerox sell its ITO business.  We’ve witnessed Cognizant double-down on healthcare and Infosys transform it’s leadership.  We’ve seen Accenture merge operations, cloud and BPO and Wipro take-on Watson with his trusty sidekick. These are just forerunners on many more big things to happen in 2015.  We expect a lot of carving up, tuck-in buys right across the board.  It’s going to be one helluva active year for restructuring activities.

5. Crowd-sourcing will play a role in the service delivery model for sourcing

In business functions like marketing and industry-specific health, where there are ad-hoc projects like product releases and surges of demand for processing such as enrollment periods, an enterprising buyer/service provider will experiment with a crowd-sourcing approach. It will allow vetted service delivery people who finish their assigned tasks early, have available time as a part-time worker, or want to apply their skills in a new way or prove what they can do, to match their skills and interest with a job or task that needs to get done.

6. Healthcare starts to live up to the concept of “patient-centered”

…with the help of service providers behind the scenes who bring experience, ideas, and practices from industries like retail and banking that have been steeped in online services, net promoter scores, and customer service indexes. As “e-Health” joins “ecommerce,” we’ll see some very specific analytics-based offerings emerge as a service that will be tied to helping health plans and providers with consumer and patient satisfaction and compliance.

7. A major global DiSaaSter will occur

A major enterprise blames its SaaS or outsourcing provider for a loss of data or information and either direct costs/valuation/brand loyalty loss. There will likely be a breakdown in personal leadership accountability on both sides of the relationship, (think SAP/Nike from the 90s and the recent hacking of Sony entertainment), and it will become big media: is SaaS safe? Is it delivering value and business differentiation or just more predictable revenue models to financial analysts and investors? Which will lead to:

Led by the European Union and followed by Asia, governments will start to institute stricter Personal Identifiable information (PII), contract labor, and business operation outsourcing and offshoring laws to counteract the loss of control with the digitization of business and information “in the cloud.” This will make employers which are thoughtful both about how they use automation, do workforce strategy and planning, and deliver a good “employee experience,” the employers of choice as Western economies come back to stable growth and restless workers sick of being poorly treated and managed take the recent 5% GDP growth in the US as a sign it is OK to move on to the next firm. Which will lead to:

9. A major War for Talent as the legacy employment model continues to lose favor with an increasing army of talented workers

Today, workers can increasingly dictate their employment terms, with recession-induced personal financial planning discipline and regulatory changes like ObamaCare making it a lot easier for individuals to accept the old employment model just isn’t in their favor anymore. Organizations are left with the legacy talent least likely to take initiative and will be forced to make the investments in the remaining workers and automation solutions just to stay in business, but will rationalize partners and look to the service-oriented firms that are willing to flex with them to adapt to the ever changing economic conditions.

Instead of the latest and greatest BI tools, cloud-based proprietary analytics platforms, open source mashups, in-memory computing or the data visualization darling app of the day, the industry will finally realize that it is the talent – both at the client and service provider sides – that will ultimately impact the long-term success of analytics initiatives. Instead of boasting about the largest catalogues of predictive models, service providers will use their talent development investments and techniques as a source of differentiation. Developing capabilities at the intersection of data sciences, statistics and domain knowledge will also help service providers gradually move past the staff augmentation model of simply offering up resources to do siloed analysis tasks. Think beefed up analytics academies, significantly deeper relationships with academic institutions across global talent hubs to develop curricula that relates to actual business context, and innovative new models of hiring and training employees to become creative problem solvers. Client organizations will take advantage of service providers’ learning infrastructure by sending their own operations and management staff to take crash courses in how to do better self-serve analysis, and make better use of analytical insights generated by their service provider’s staff.

By the end of 2015, we’ll start to see clearly defined service offerings around social care as a critical part of omni-channel CRM BPO. The move towards impacting the overall customer experience can no longer ignore the fact that consumers have their own preferred social channels that each brand has to have relevant presence in – not just to do cheesy marketing promotions, but take the opportunity to proactively service customers in these channels of their choice. Social CRM BPO won’t mean responding to a tweeted complaint by saying, ‘Please call us to resolve this offline’, as some service providers have started to do for their clients under the guise of ‘omni-channel’. With the use of increasingly sophisticated social listening and moderating tools, intelligent automated agents, 360 degree customer views, and analytics using multiple sources of data (call center, surveys, consumer databases, social, point of sale, etc.), you can expect the BPO agents of the near future to proactively respond to your Instagram of terrible airline food with resolution and support within the channel and device of your choosing.

12. Vertical-specific processes must move to BPaaS… or perish

BPO delivery of several vertical-specific processes are at a point where the ‘big bang’ cost and standardization benefits have been achieved, service provider staff have gained significant domain experience and understanding of industry workflows, and providers have made investments in introducing options for running them on modern business platforms, either internally developed or acquired. These are most often areas that client organizations view as non-core or non-critical, meaning they aren’t willing to invest in updating the underlying technology infrastructure for them vs. other core revenue-generating activities. Examples include claims administration and policy serving in insurance or payment processing, retail wealth management and retail origination in banking and financial services. 2015 will pose an inflection point for BPO clients to evaluate BPaaS delivery, or risk an increasingly stagnating value proposition as competitors access new sources of platform-driven cost reduction, standardization and flexibility.

We will close out 2015 talking about Supply Chain SaaS platforms in the same breathless manner in which we currently look at Salesforce and Workday in particular. The opportunities for increased agility, flexibility and reduced operating costs are too great in supply chain for this not to take root in a much more significant way in 2015. The set of SCM BPO service provider offerings around such a platform (or platforms) should be integral to the way that we evaluate service providers in our next SCM BPO Blueprint in 2015.

15. Consolidation among India-heritage service providers has to happen

In the As-a-Service Economy, service providers needs specialization to triumph scale. But for mid-tier broad-based service providers the “as-a-service” economy may be the end of the road, and they may well start cashing out to tier-1 service providers before it is too late. Our top prediction in this space is that Tech Mahindra might be interested in a BFSI acquisition which inches them closer to their internal target of $5 billion in 2015. We think Mphasis or Polaris might be a good target for Tech Mahindra.  Virtusa is also an increasingly attractive ITO prospect with its grounding in the insurance sector and high growth potential. On the BPO side of the fence, EXL would make an attractive target for one of the larger service providers wanting more chops in the insurance industry and WNS has come off a good performance in 2014.  There may also be some interesting developments with Genpact which could either acquire of be acquired to fuse more tech-enablement scale and skill to dovetail with its huge base of BPO clientel.

16. Wearables – watches and glasses – suddenly begin to displace smartphones as the interface of interest and intent

It has been a long time predicted, but 2015 will finally see this opportunity become reality. Driven by Apple’s iWatch, Sony and Google’s glasses – we’ll start to see real applications of extending data and compute more directly into our personal environments in a way that makes the 2 dimensional smartphone appear like a brick.

17. IoT becomes the new catch-all… and for good reason

Driven by the trend on wearables above coupled with ongoing attention to M2M, mobility, and a need to move Digital discussions down to a level of action from the lofty level of strategy, IoT will become the new call to action and not just for large scale field assets but also for, say, bridging the actions of mobile workforces with centralized systems. i.e. It becomes the UberMobile and marketing efforts get spent around pushing this message out.