As Wipro drops out of the “offshore big three”, high-time to offload Infocrossing?

Several leading service providers have been taking a long hard look at themselves in recent months as they come to terms with a new breed of competitors, increasing demands and pricing requirements  from clients.  These include the likes of CSC, HP and, more recently, leading Indian HQ-ed provider Wipro.

To further exacerbate their situations, we are teetering on the brink of a renewed recession, hence rapid restructuring and renewed strategic focus is critical, if several of these providers are to avoid breaking up and beiing auctioned off.  And not everyone can hire the President of eBay to do that for them, as we hear she’s just taken a new job (ahem).  HfS analyst Robert McNeill takes a further look at Wipro’s current predicament and poses the question:

Is it Time for Wipro to sell Infocrossing?

As industry tongues continue to wag over whether Wipro is about to divest its Infocrossing data center and infrastructure assets, we believe this is a step in the right direction as the firm refocuses under TK Kurien, and seeks to regain its status as a “Top 3” Indian headquartered services provider.

The quarter ending June 2011 marked the point where Wipro was relegated, for the first time, from the top three Indian outsourcers, in terms of revenue, as Cognizant has continued its breathless growth surge to forge ahead: 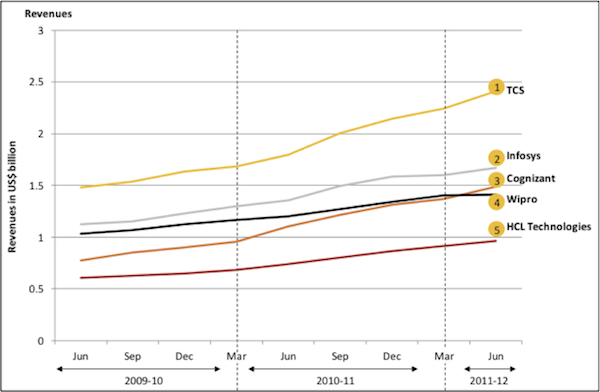 In August 2007, Wipro acquired Infocrossing for $600 million, a firm which then had revenues of around $200 million. Wipro had plans to use Infocrossing as a means to get into the infrastructure outsourcing and hosting business in a big way. However, the Infocrossing unit has largely been operating as a siloed subsidiary, with Wipro failing to launch a more credible hosting or even Cloud play. We have never believed this “asset heavy” business is in the true DNA of Wipro as a business (or as a matter of fact any of the offshore services providers) due to the heavy capital requirements required to lead in this market and the fact that the “asset lite” remote infrastructure management market has taken off into a multi-billion dollar business.

Since 2004 Wipro has been particularly adept at selling remote infrastructure management outsourcing deals from its applications services clients. It has also found success displacing the large asset-intensive outsourcers like CSC, IBM and HP in some existing infrastructure outsourcing engagements. Not having to acquire physical assets or re-badge people, the company has been able to manage many infrastructure services like server monitoring, database management and helpdesk from an offshore location and rely on subcontractors for on-premises work.

But its current infrastructure management business is much like any of the other major offshore providers. Why did Wipro not develop the Infocrossing business to build out significant Infrastructure-as-a-Service (IaaS) offerings and differentiate itself with its close competitors? Simply put, it is now extremely difficult for lower-tier hosting providers to compete without the scale, available capital and technology prowess required for playing in the Cloud. The hosting and IaaS market is fast commoditizing with Cloud service offerings available from the likes of massive infrastructure providers such as Amazon, Google and the Telco providers. 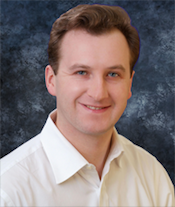 Wipro’s new CEO, TK Kurien, who is settling into his new role (which he started in Feb 2011) appears to be doing the right things, such as investing time in speaking to Wipro clients and industry stakeholders. We believe that a divestiture of Infocrossing makes sense for Wipro and could be good news for Infocrossing clients if a major Telco is the eventual acquirer. That could mean new investment and solution bundles that take advantage of combined network and hosting assets. Potential acquirers may include the likes of AT&T, BT, DT, Sprint, Verizon, and even NTT that recently acquired hosting/cloud provider Opsource, Centurylink that bought Savvis, and TimeWarnerCable that bought Navisite.

Posted in : Cloud Computing, IT Outsourcing / IT Services