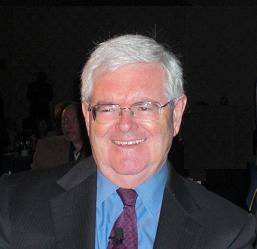 I had the pleasure today of having lunch with former Speaker of the House Newt Gingrich, who is also widely rumored to be a possible Presidential candidate in 2012.

While I do not share many of his political views, Newt does have some nailed-on perspectives on globalization, outsourcing, and some measures the US needs to take to get its act together to remain the world’s economic superpower. Plus, he’s very funny.

Here are some soundbites from his keynote speech at the excellent Sourcing Interests Group conference in Baltimore from earlier today:

"We’re spending trillions to cover up really stupid policies, violating every fundamental principal of economics. These congressional leaders are people who know nothing – our Founding Fathers deeply mistrusted politicians. Bush was wrong for all of 2008. Paulson the worst ever Treasury Secretary, even though Geithner is now rivaling him."

"We’re at the end of a 50 year period of being really sloppy and self-indulgent.

"There is not one living being that can accurately predict the outcome of this crisis, all we can do is continue the dialog and the answers will slowly unravel.

"We need to create a country that’s continuously evolving and agile: a country where someone invented something when I was asleep.

"China and India are real. You can pretend all you want, but if we’re going to compete, the minimum conditions to become the most successful country in the world are as follows: We mist reform taxation, litigation, regulations, education, healthcare, energy and infrastructure. We are facing the biggest decisions since the Civil War. There’s no pearl harbor this time, we have to look deep into our hearts and make a decision. We’re acting against the tide of history.

"Those that make the fewest mistakes will come out the most prosperous. Swedish government decided not to save Saab. The French are not doing a stimulus package. Now we are the most left-wing government in a G20 meeting

"Reagan in ‘79: a recession is when your brother-in-law is employed; a depression when you’re unemployed; a recovery is when Jimmy Carter is unemployed

"Policies matter. This is the worst crisis since the 1930s. We have no experience-base, and none of us really understands what us going on. It is so enormously complicated. It’s like white water canoeing… you don’t know what’s around the bend and where the next rapids will be.

"It really is this simple: what is it our customers want so bad they’ll pay for it? And will their checks clear? Entrepreneurs invent value, customers define value

"Cash is king. Shortest period of economic difficulty is 3 years, and longest is 12 if we make dumb policies. But there’s a desire for caution: big dreams, bold plans, but wise wallets. You can’t afford to make mistakes in this environment.

"Our bureaucracy has been declining for 50 years. Our last great government manager was Eisenhower.

"Barring a catastrophy: In the next 25 years the a richer, healthier, greater connectivity and will travel more safely, but will the US

"Capitalism is a rough and tumble system. It makes the customer king. At its core is a cultural fight where you are reduced to being a client. It’s a hard tough business

"And what does Sarbox do? Costs $3.8 to $5 million per company to become compliant. Find me a single example of how Sarbox triggered information that was helpful.

"The last 3 years of Greenspan were incomprehensible. He pumped money out, literally begging banks to get in trouble. Billions of dollars at low interest rates. Of course they’ll bite.

"But we’re a long way from panic. We have the most energy in the world: 27% of world’s coal and huge oil reserves. We’re like a patient that keeps hitting himself with a hammer: but once he stops, the headaches will go away"