During Part I of our interview with Genpact’s CEO NV “Tiger” Tyagarajan, we compared the metamorphosis being experienced today’s by today’s business services industry with that of manufacuring 20 years ago:

Now most manufacturers don’t make all things that go in an automobile or an iPhone. Today, Apple does the intellectual capital of the what, the how and the design. They also do sales and marketing. But not much else. I think services are going in the same direction.

In Part II, we discuss the bifurcation occurring between the sourcing approaches of small and mid-sized organizations and today’s large enterprises… and the pace of change we can expect in today’s environment.  So without further ado, let’s go back to Tiger’s Tales… 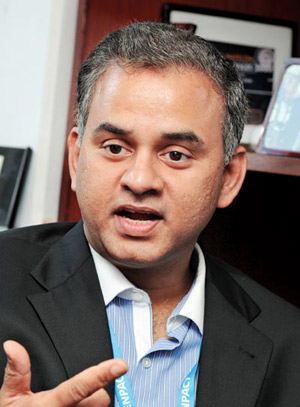 Phil Fersht (CEO, HfS Research): Tiger, do you see bifurcation happening in the sourcing industry? We have a lot of small-to-medium-sized businesses quickly evolving, where IT is in the cloud; everything is outsourced unless they actually want to keep it in house, and many are morphing into increasingly virtual environments  Then there are the larger enterprises which are moving at a snail’s pace – they don’t want to change, they seem to becoming more risk-averse, if anything. When we look ten years out, we’ll clearly have have a lot of smaller, more nimble companies, but will the enterprises really have changed all that much? How does a business services company like Genpact evolve in this type of environment?

NV “Tiger” Tyagarajan (CEO, Genpact): Phil – it’s a great question. Smaller companies are able to attack larger companies because they are structured differently.  We have worked with a large UK healthcare provider for seven years. Two years back they decided to come to India and set up an insurance business. They formed a JV and set up the business.

The insurance market in India was new, young and growing with very large competitors with client bases of 20-30 million people each. This company decided they wanted to grow at rocket speed. And they needed a cost advantage that is incredibly crazy.

Insurance companies take time to break even because there are a lot of upfront costs that you recover much later. They decided they wanted a variable cost from day one. They just wanted to own their sales force, their product, their consumer, their policy and their intellectual capital. That’s it.

We set up their operation from scratch. We started with two people. They did everything on the cloud. Today, we have 200 people serving them. They have a CEO and a CFO, product designers, marketing people and a sales force. That’s it.

The result: They are the fastest growing insurance company in India for the last two year by factor of two to three X. They have a cost structure radically different from everyone else. We think this is an incredibly crazy model. What is fascinating is their competitors, even in a developing market like India, have 15,000 people with a legacy system with 15 million accounts.

How can the big companies compete with these guys? I think they have a chance because they are growing 25 percent. But what about a US insurance company growing at 1.5 percent? They will have to evolve. It will be a combination of data, technology and process. Companies like us have to be the solution providers to make these companies successful.

There will still be Wells Fargo, Procter & Gamble, Unilever. We will have to pick and choose who we want to work with. Who will change? Who will move fast? Who is the most innovative? Who will take the tough action?

Phil: Do you think companies will decide overnight they’ve had enough of clunky infrastructure and operations, enough of these tired old ways of doing things; that it’s time to change. Or, do you think this is a gradual, generational shift into the new way of doing business?

Tiger: It will vary company by company, which is fascinating because it shouldn’t. It won’t even be industry by industry. In each industry we see some companies move much faster. They create a burning platform to drive change. Sometimes it’s because a new leadership team comes in and rocks the boat. Or because they get pushed to the wall. It’s completely dependent upon leadership and the leadership’s ability to drive change. It’s about the confidence they have, the risk they want to take and what they have at stake.

But it is also industry dependent. Some industries are going to get pushed far harder to change faster. Look at the pharma companies. For so long they have done nothing. And why would they? They have had 85 percent gross margins in the last three years. But even now that’s not enough. Some of them still live in a fool’s world. Their profits are rapidly declining; last year it was 70 percent. But that’s not three percent!

As we look across the IT landscape, especially the mature IT landscape, some are doing so well and some aren’t. I think part of the reason is their clients. I would argue some companies have chosen to play in industry verticals and client organizations that by definition drive change faster and harder, which enables them to grow. Other companies, unfortunately, have industries and clients that are not like that. They are stuck with them. When you go through turbulent times, they don’t grow.

We are big believers in selecting your clients properly. You can help clients change when they are able to drive change hard. We watch when companies undergo leadership changes. Because often it’s the leader. They come in with a fresh view. They have no legacy. They have no fear. Often they have a mandate to change. No one will really question them.

Stay tuned for Part III, where we’ll talk about how well providers understand their clients’ businesses…

NV “Tiger” Tyagarajan (pictured) is Chief Executive Officer for Genpact.  You can view his full bio by clicking here