The great analyst firewall: will banning analysts from blogging damage the traditional research business, or help create an entirely new one? 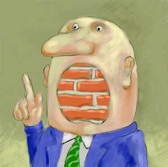 What's happened to the industry analyst business?  You may recall a discussion right here two years ago when we berated the Chinese Internet purges and the impact they could have on the development of their own knowledge services and BPO industry.  While such censorship of free opinion-sharing is depressing enough in a controlled society, it's even more alarming when it's happening right on our own doorstep, when you see analyst heavyweight Forrester Research officially banning its own analysts from having personal blogs that touch upon issues related to their research coverage or technology markets.

If you saw the recent passionate debate over at analyst relations guru Carter Lusher's Sage Circle site, you can read an official statement from Forrester's head of Corporate Communications:

"We believe we can best serve our clients in their professional roles by aggregating our intellectual property in one place – at Forrester.com.  Make no mistake: Forrester is committed to social media, and the number of our analyst bloggers is increasing, not decreasing. Analysts will still have the ability to blog outside of Forrester on topics not related to their coverage areas."

Analysts will still have the ability to blog outside of Forrester on topics not related to their coverage areas?  Hmmm… I really do want to know about their CRM analyst's stamp collection.

I fondly recall the heyday of industry analyst business in the '90's, where the technology and services business thrived on innovation, on research, on unfettered opinion, where people had a vision and were unafraid to give forward-looking – and sometimes far-reaching - views regarding what was going to happen next, in a world that was being dramatically impacted by the onset of the Internet and web-enabled technologies, readily-available computing power and networking infrastructure, and steady globalization.

The "rock star" analyst had arrived.  People paid good money to spend time with these people, to hear their views, use them as a sounding-board, or just to be associated with them.  And their growing corporate stables certainly didn't refuse the increasing moneys that came rolling in off the back of their growing relationships and influence.  The rock stars created buzz and drove the industry, challenging both vendors and customers to innovate and transform business models.

However, like anything else, corporates like to monetize their brands to the max, scale their businesses and drive down their costs.  It's business economics one-on-one, and the big analyst firms are no different.

We want Bill, not Ben

Having their clients say "I want Bill, not Ben" was (and still is) infuriating to the analyst firms.  They want their clients to pay the same for the 28-year old fresh from her MBA, than they did for the rock stars of yesteryear.  And they're currently succeeding, as there aren't too many alternatives right now.

Most of the analyst rock stars have ventured off to start their own ventures in recent years, move into related industries, consult, run blog businesses or go work for vendors.  The "rock star model" simply wasn't scalable for the analyst firms - it look too long to develop them, and the risk of lost revenues were they to leave, proved too uncomfortable – not to mention the fact that they were hard to control once they realized their monetary value.

However, just like any business utility, once you remove the personalization and the added value, clients wind-up only receiving the transactional services stipulated in the contract (sound familiar?).  If analyst firms trained all their analysts to be rock stars, surely they could scale their highly-profitable assets and have junior rock stars step in when the senior ones choose do move on?

I don't blame Forrester for their new policy - they're simply protecting themselves from analysts building strong personal brands and jumping ship to more lucrative climes when they become famous – even though there are only a small handful of blogging analysts who have ever chosen to do this.  Plus, their competitors haven't exactly embraced social media either.  Banning their analysts blogging on their industry issues is probably not illegal (am sure they considered all the angles before issuing this new policy), and they are free to choose how they run their business and manage their culture.  They're also probably getting paranoid that one of these days they'll get slapped with a law-suit from some vendor that got caught on the wrong end of some angry analyst tirade – although today, most vendors seem to be able to distinguish between a blog post and a Magic Quadrant… it's social media one-on-one.

Competent analysts should be trusted to write blog-posts

Another core issue here is trust.  Some analyst firms would rather have their analysts' work sit in editorial queues for weeks, than get their craft out to market while it's still relevant.  Rarely is a piece of analyst work altered in this process – simply modified slightly into a consistent look-and-feel.  C'mon… if an analyst cannot produce written materials that isn't fit for a blog, then you have to seriously question why that individual is an analyst in the first place.

Once an analyst has proven that she can be trusted (i.e. after 6 months), surely it's time to let them leverage social media to drive awareness to their work and engage in intelligent debate with other smart people?

The implications to the traditional analyst model could be severe

All-in-all are some powerful implications that this type of policy could have on the analyst business:

1) The traditional analyst firms are losing touch with today's social-media driven society.  Hate to be the bearer of bad news, but most of the research we see these days isn't telling us a whole lot we didn't know already (and am sure I am equally guilty here).  People simply aren't as desperate to read it as they once were.  Sectioning it off behind a firewall for big-paying subscribers is only going to damage their relevance in a marketplace which is increasingly driven by rapid, to-the-point, relevant and compelling insight.  For example, our post covering the ACS/Xerox news hit the media before everyone (about 8.00am), got thousands of web-hits and generated some very interesting debate. By the time the big analyst houses put out their take on the merger, it was old news, and few people took any notice.  Hey – it was already old news by 11.00am that morning, let alone two days' later!  If these analyst firms cannot trust their own analysts to give their opinion in events in a rapid manner, then they will fade – and fade fast in this environment.

2) Ambitious analysts will lose their energy if they are muzzled.  While some veteran analysts are happy picking up a pay-check and toeing the corporate line to keep their jobs, the younger breed are eager to impact their market and get their name out there.  Removing their ability to blog is taking away a major outlet for them.  Analyst energy thrives on the recognition of their craft, and cutting them off at the knees is surely a de-motivator for many.  Simply-put, the top analyst firms will lose their ambitious talent if it's muzzled from our new socially-media driven world.

3) New boutiques will spring up.  The other – and most damaging – implication is a likely appearance of new boutique analyst firms that heavily use social media to reach eyeballs, research markets and share opinion and debate.  Altimeter Group set up shop last year and is already turning away new clients.  Their model is based on popular "rock star" analysts with successful blogs. Other new research firms are mooted to be in the works, with some customers eager for a change from the staid old model of dry reports, and toned-down opinion.

The technology and services industry is desperately searching for its mojo, and analysts can help provide the catalyst.  Muzzling their views by keeping them from using social-media channels is a worrysome trend and will hold back the Forresters and co. in the long-term. However, won't their loss be others' gain?  You do just start to wonder…