The Campbell chronicles: an exclusive interview

If the Queen was handing out honours for outsourcing, then “arise Sir Kevin” would be a likely outcome.  However, unless Accenture can grant him a British passport, even their PR heavyweights may struggle to pull that one off.

Kevin Campbell is a legend in the outsourcing business (I refrained from saying “the Tiger Woods”…), having begun his career with the old Andersen Consulting business in the 90’s before making his name as the COO of Exult, the protagonist of HR BPO, where he b ecause synonymous with many of the early multi-process BPO deals for clients such as BP, Bank of America and International Paper.

Upon Exult’s sale to Hewitt in 2005, Kevin found himself returning to his roots with Accenture, where he how has been elevated to overseeing the firm’s entire $9.2 billion global outsourcing business, when he’s not watching re-runs of the Packers and terrorizing his kids.

I managed to catch-up with Kevin recently, and was surprised to hear he’s a regular visitor here, so convinced him to share some of his views on the industry with us…

PF: We’ve been through a tremendous development in the world of both ITO and BPO over the last decade. What, in your opinion, has worked, and what hasn’t?

KC: No matter how far this industry evolves, the common denominator for success is a business case that works for the customer: a good business case backed by a solid solution that delivers. And each deal has to be good for both the provider and customer, so if you are an outsourcing buyer and the price seems too good to be true, you will likely live to regret it. Providers need to be disciplined in bidding and know when to walk away from an opportunity. Often times, service providers are known more by the deals they walk away from than the ones they do. “Getting better” over time is also critical. The customer has to be a wise buyer of outsourcing services and the provider needs to become more productive during the life of the deal. Lastly, something I don’t see enough of is the focus on defect-free delivery. ITO and BPO both run most efficiently and effectively when they are free of operational errors and defects. And providers must not forget to eliminate any variation in the quality of their services nor lose sight of the impact it has on their client’s business as while SLAs might be green, the client won’t be happy.

PF: We’re clearly at an inflection point in the industry as the fog lifts from this Great Recession. Do you see companies approaching outsourcing any differently? And which areas of outsourcing do you see developing in the near/long term?

KC: Today’s economic environment presents a great opportunity for outsourcing to accelerate in the marketplace. Outsourcing is fueled by change and one thing companies can’t do today is just stand still; they need to adapt and do things differently. And I’m not talking about incremental change—it is big, fundamental change, both from a business model perspective and the use of emerging technologies such as cloud computing and Software-as-a-Service (SaaS). Particular industries which will likely embrace such change include banking, insurance, healthcare and most of the direct-to-consumer businesses like retail and telecom. And the whole mindset toward outsourcing will evolve as the challenge that comes with the word “Outsourcing” is the prefix “out”. In the future, we’ll see companies creating new capabilities or new markets and they will just make sourcing decisions based on which provider can deliver the relevant services and it won’t be considered as sending something “out”.

PF: What is your definition of innovation within outsourcing and are we really seeing it in today’s engagements?

KC: Innovation is doing something that stretches the boundaries of what has been done before or does it in a much less-costly way. For example, it could be a simple application of technology to a people-oriented solution. It might be collecting data and presenting it in a meaningful way so people can act, or it could be identifying a way to drive cost out of a business process or using BPO in a new functional area. 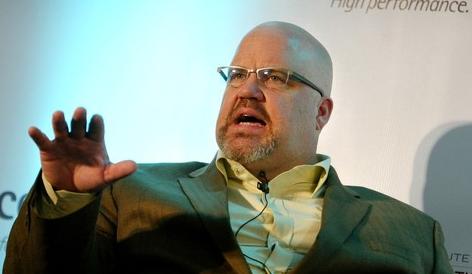 The Group Chief of Outsourcing at Accenture, Kevin Campbell gestures during a press conference in Bangalore

PF: You coined the phrase “Bundled Outsourcing” a few years’ back…Do you really believe we’re going to see a strong inter-linkage between IT and BPO service delivery in the next three years?

KC: The concept was—and still is—absolutely right. People cannot afford nor are they capable of effectively managing all the relationships they have with different vendors. Perhaps what we should do now is add the word “sequential” in front of bundling. “Sequential Bundling” is something we are seeing more and more frequently. This is where a customer continues to do more with a provider based on a successful relationship and positive experience. Will we see a return to one-vendor days? No, but I believe we will see people continue to move to two to three strategic providers across the majority of functions and toward business process sourcing.

PF: What is your opinion of the emerging locations, such as the Latin countries as nearshore hubs for US-driven ITO/BPO engagements?

PF: Do you see China playing a more influential role in delivering ITO/BPO services in future?

KC: Yes. We’ve had an outsourcing presence in China for several years and the time and environment is now right to accelerate the use of China for ITO and BPO services. Chinese companies understand the imperative to leverage its large labor resources and improve their talent needs. This will in turn make them more competitive and force international competitors to be more creative in their talent sourcing strategies.

PF: Are there other sourcing locations you believe have a pivotal role to play?

KC: The Philippines will continue to play an important role. We began using the Philippines to deliver outsourcing work back in 1990 and it is now the second largest node in Accenture Global Delivery Network providing a full range of services globally including AO, IO and F&A, HR and Customer Contact BPO, as well as industry-specific services to utilities, telcos, airlines, insurance and health and life sciences companies. Other locations that deserve more and more consideration in the future include Vietnam, South Africa and Russia.

PF: How do you see the service provider landscape playing out in this market?

KC: I think the cycle of innovation, growth and then consolidation will continue. Will we ever see the volume of new companies being founded that we saw during the late 90s or early in the decade? It’s unlikely, but there will always be people who feel they have a better ‘product’ to offer and believe they can disrupt existing providers. However it is very difficult for a small company to grow and go against the big, major players. Eventually, the extensive resources of large providers allow them to narrow the competitive advantage, and then on-going investment, stability and financial strength force market consolidation.

PF: Which providers will emerge stronger / weaker, and do you see a lot of consolidation moving forward?

KC: I do see consolidation going forward and think we could see some interesting combinations. Today’s economy will play a role in shaping the outsourcing industry and force companies to look more closely and critically at their current business models. Those with a broad set of interlocking services will fare better as they will have the most to offer clients in terms of operational efficiencies and business impact.

KC: Service providers and software vendors operate on different business models and I don’t see them co-existing in significant ways over the long haul. Now that doesn’t mean we might not see a service provider buy a software company, or more providers using software as a service, but I still believe strong alliances are more sustainable.

PF: And finally – you have had a tremendously successful rise to prominence in the outsourcing industry over the last decade. What advice would you impart to ambitious executives today hoping to achieve success, especially in light of the economy?

KC: Thanks. If you make sure you have great people on your team and work with great clients, the rest will take care of itself. Any personal achievements and successes are due to having great mentors; great clients who are often time also friends; and being fortunate enough to lead the most talented teams on the planet.

PF: Thanks for sharing your views with us Kevin

Kevin Campbell (pictured) is responsible for Accenture’s global IT and BPO outsourcing business, which provides application, infrastructure and business process services to more than 650 clients globally.