Why is Gartner spewing such irresponsible and unsubstantiated data about “robobosses”? 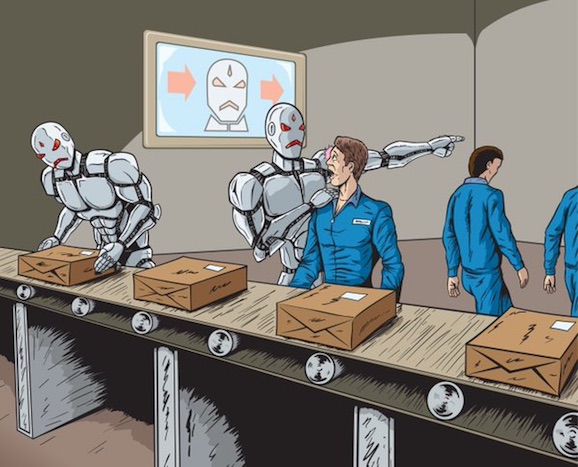 Clients are being subjected to such a load of nonsense about the impending impact of robotics and cognitive computing on enterprise jobs, many are literally terrified. Conversing with the “head of automation” for a F500 organization today, is akin to meeting a Secret Service agent in a clandestine alleyway. These people do actually exist, but most have to conduct their work under a veil of secrecy, due to the level of discomfort and panic our robo-commentators are making in the presses.

Remember the panic about jobs getting shipped offshore?  Well, that is child’s play compared to the emerging tumult of fear being generated by jobs being completely eliminated by robotics. Net-net, people are frozen stiff with fear, and it’s the responsibility of respected analysts, consultants, academics and journalists alike to educate and world using real, substantiated facts. Sadly, the likes of Gartner, McKinsey, Oxford University and our beloved Stephen Hawking, all seem hell-bent on capitalizing on the panic to grab the headlines (read my post earlier this year) as opposed to dispelling much of the ridiculous scaremongering about the impact of automation on job losses.

At HfS, we published a very thorough analysis on the impact of automation on global services jobs, showing there is likely to be modest downsizing of ~9% over the next five years as low-end tasks are increasingly automated across major service delivery locations.  And this 9% will be immersed in natural attrition and redeployment of workers to other industries, as global services streamlines and matures as an industry. Yes, there will be impact, and it will be somewhat painful to absorb for some enterprises, but it’s not the impending workforce apocalypse these people are predicting.

So why, pray tell, is Gartner, a respected voice in IT research, continually pounding us with continual scaremongering that we’re all doomed to the will of the robot, and we may as well start preparing for a life of unemployment, or sandwich making? Oh wait, robots can even make sandwiches, right?

Peter Sondergaard, Gartner’s Head of Research, predicted one in three jobs will be converted to software, robots and smart machines by 2025.  OK, that’s so far out in the future, I think Peter’s on pretty safe ground here – he’s probably going to have cashed in his Gartner stocks long before then, in any case, and be on a golf cart somewhere, when one very earnest soul decides to dig into the Gartner archives of previous decades to read very old research, with very dodgy predictions, that absolutely noone care about anymore.  So we’ll let Peter off the hook here – he wanted to make a splash at his Symposium and he achieved exactly that.

But then we get treated to this almighty whopper from Fran Karamouzis, a vice president and distinguished analyst at Gartner…

By 2018, more than three million workers globally will be supervised by “robo-bosses”.  Wow – isn’t this barely more than a year away? Excellent, so Fran’s going to be around to declare automation glory when global employment goes through a robo-geddon so seismic, it’ll be like all three terminators visited from the future at once  to change the world? My god – what is going on here? The suggestion that an employee will be supervised by a machine simply cannot be corroborated by any meaningful research…

So why do we, at HfS, view claims like this as factually incorrect and irresponsible?

There is only one very shaky example of “robo advisors” in the industry. The most cynical implementations of automation that HfS has come across, thus far, where direct replacement of human labor by robots is the declared outcome, are examples such as Royal Bank of Scotland, where virtual agents, deployed as “robo advisors” are solely deployed to replace FTEs.  We’ve also witnessed a service provider radically downsizing some delivery staff claiming success of its robotics strategy (only to find out later these staff were simply redeployed elsewhere).  Let’s be honest here, the onus so far seems to be about firing people and using “robotics” as the smokescreen. While Intelligent Automation decision-making will undoubtedly increase (view our Continuum here), we see no examples of employees being supervised by bots. At HfS, we are covering every deployment in the industry, and are just not seeing it.

We still haven’t had a real debate on the ethics of automation and cognitive computing in the B2B environment. Suggestions that employees will be supervised by bots can be traced to the broader discourse on Artificial Intelligence, where more consumer-facing technologies are discussed with undercurrents of movies, such as the Matrix. These discussions tend to focus on technology capabilities of providers like Google and Facebook. However, we haven’t seen a similar debate in the B2B space. If anything, the B2B urgently needs a debate on the ethics of automation, in light of these nascent cognitive capabilities. But to surmise that robobosses will be so prevalent in barely over a year before we’ve even had these debates is quite absurd.

The speed of internal organizational change is painfully slow. The tendency from clients with automation is to pilot first, rather than to go full scale, and every ambitious forecast is always waylaid by the reality of interacting with legacy systems.  Most of today’s Robotic Process Automation(RPA) tools are simply being retrofitted into smoothing over manual processes within legacy technology environments with obsolete processes. They are adding efficiency to broken operations, which may, in the future, lead to a lesser need for headcount in low value work areas.  Talking about today’s enterprises being so close to investing in Robo bosses is just very wide of the mark.  What’s more, much of this RPA technology has been around for more than a decade – this stuff isn’t exactly revolutionary, it’s just becoming more popular as enterprises figure out further efficiencies beyond initiatives such as offshore outsourcing and shared services

Cognitive tools are only just emerging. While IBM has done a stellar job aligning its Watson capabilities with the healthcare industry (read our report here) and software experts such as IPSoft’s Amelia and Celaton have some compelling client stories to tell, the focus on self-learning and intuitive cognitive solutions are mainly confined to customer service technology and virtual assistant chatboxes.  Talk to the call center BPO providers and they’re really only just figuring this out…. forget robobosses, we’re still just trying to figure out some basic software to make chatboxes work better these days. Moreover, with Watson, our research shows it’s best application today in the medical field is helping flesh out the bad science and saving scientists serious amounts of time doing their research.  Meanwhile Celaton, in the UK, has created a really cool tool to help Virgin trains handle emailed customer queries.  But the long and short, here, is that Intelligent Automation solutions today are great at augmenting processes and unstructured data pools, not replacing real people who make real decisions doing real jobs.

The definition of robo bosses, and the potential value, of robobosses is missing. There is, however, something to be said for the value of increased automation combined with analytics to better understand the impact — measured by targeted business outcomes — in a more realtime way during a contract with a “gig economy” worker (or any worker).  Such knowledge can help us intervene and train/coach a project “going south” sooner, or catch fraud fastest, or identify a worker to “gets it faster”. Along these lines, we see value in “robo advice”, but the point also needs to be made that these “robobosses” (give me a break) do not work alone, such as with Watson and health / medical diagnosis and treatment, they work in tandem with doctors / clinicians, changing and refining the dr/clinician job (freeing up that person to be more targeted and more of a coach than a statistician) with the intent of better medical results.  These robo tools (or whatever we call them) do not replace the doctor / clinician.

Monitoring software has existed for decades… so when does it become a “Roboboss”? Currently, there are probably a million or more workers just in the UK (for example) managed by extreme monitoring of some kind. The Amazon style warehouse pickers, fast food cooks, many call center agents, delivery drivers, assembly line factory workers are subject to time monitoring and computers giving them tasks. We’re just not sure when this turns into a roboboss?

Bottom Line: The real “roboboss” is the human worker who can use Intelligent Automation tools effectively

It today’s swirl of gibbering noise around the social media presses, it’s the responsibility of leading analysts, advisors and academics to be the voices of sanity and reason, when it comes to topics as critical as the future of work elimination through Intelligent Automation technology.  The vendors love the hype as it gets them attention with clients, but analysts who like to take money from these vendors have a responsibility to articulate the realities of these technologies to their clients. They are great at augmenting work flows, and even aiding medical discoveries, but this is the real value – it’s not about sacking people.  It’s about making operations function better so people can do their jobs better.  The real “roboboss” is the human enterprise operator who can use smart Intelligent Automation tools to enhance the quality of their work.

Net-net, industry analysts, advisors, robotics vendors, academics and service providers need to engage with clients around how all these disruptive approaches will affect talent management as well as organizational structures. Even without these apocalyptic scenarios, some job functions are likely to either disappear or be significantly diminished (as our 9% forecast reveals). Equally, we need to talk about governance of these new environments, touching upon ethical, but also practical, issues. This is not only a necessity for the broader adoption, but also offers high value opportunities.

I’ll probably get a few nasty messages as a result of this piece, but I sincerely hope this has the outcome of steering our industry conversation in a more realistic direction, backed up by real data and experts who prefer realistic conversation that mere headline-grabbing and panic creation.

A special shout out to Cartoonist and Innovation evangelist Matt Heffron for penning this little gem: