Top outsourcing correspondent, Stephanie Overby, last week ran a lively discussion over at CIO.com with a couple of Harvard academics, Professors David Pisano and Willy Shih, on that fine vintage topic “How Offshoring Can Kill Innovation”.  However, unlike that case of ’86 Margaux in your cellar, we rather fear this argument is beginning to take on a tinge of vinegar.  Time to change that ol’ record?  Let’s ask HfS COO, Esteban Herrera… 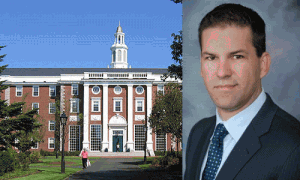 Esteban Herrera (click for bio) may not have got into Harvard, but he sure knows more about outsourcing than them

The provocative interview of two Harvard Business School intellectuals in CIO Magazine is making the rounds and generating some interesting discussion. It will undoubtedly stoke the already heated fires of the sensationalist anti-outsourcing crowd and provide fodder to those who say that offshore outsourcing detracts from the “client” companies’ and countries’ competitiveness.

The problem is that the argument being made, that outsourcing higher-end, higher value business processes will lead to erosion of the ability to innovate is at once obvious and flawed. Professors Pisano and Shih promote the concept of the “industrial commons”, the ecosystem of companies that collaborate and compete in any given industry,  I failed to get into Harvard, but I can tell you beyond shadow of doubt that if you outsource, say, R&D,  over time your company will cease to be good at R&D. The professors themselves say they are not anti-outsourcing, just cautioning companies not to outsource the wrong things. Well, we wholeheartedly agree, and we also agree on something very simple, which the interview does not make clear: what you can and cannot outsource successfully depends entirely on your strategy! If you want to compete on manufacturing prowess, then you probably should not outsource manufacturing. If you really believe the way you pay your bills is key to that sky-high valuation, then you better stay away from F&A BPO. We at HfS would never advise any of our clients to outsource anything that is fundamentally and uniquely tied to their strategic success.

But the argument falls down pretty quickly, and Dr. Pisano himself provides the evidence: He remarks that because US PC manufacturers outsourced both design and manufacturing, they were left vulnerable to the Apple iPad—no tablet has been as commercially successful as the iPad. True. The problem, of course, is that Apple also outsources BOTH design and manufacturing, making it no different than its would-be competitors. That is because Apple’s strategy is not to win with superior devices (often their products are over-priced and under-featured), but to provide the platform, and thus be the infamous toll-taker, in which consumers can lead their digitally connected lives. Apple writes very little software for its devices. Apple does not write or record the music on iTunes. Apple does not provide the network for its iPhones. What apple does very well is provide me (and you) with the platform in which I can acquire and store my music, organize my personal and business lifestyle, play Words with Friends, write this blog post, watch movies and shows, etc. The remaining competitors fail not because their devices are inferior, but because they see themselves as device companies, not as content delivery companies. It has nothing to do with outsourcing and everything to do with sticking to a successful strategy—one which, in this case, fully embraces the outsourcing of some very high end activities.

P&G, one of the most innovative companies in the world (and one of the most admired for being well managed), deliberately outsources innovation. P&G understands that individuals and other companies will have infinitely greater ability to develop new ideas than themselves, even if they are quite good at new ideas. There’s just much more capacity to innovate outside the walls than inside, and P&G gets that. By being open to external innovation, P&G delivers on more innovations than any of its competitors, in part because it has ceased to see itself as a CPG company, and started to develop a core competency on harnessing and capitalizing on a broad network of innovations. One can use the exact same argument Professors Pisano and Shih make to describe their success. P&G believes so deeply in the concept of industrial commons that it has chose to expand its ecosystem globally, leveraging lots of partners and individuals to bring more (not less) innovation to its products and markets.

In the end, what strikes me about this argument is that it seems to give too much weight to geopolitical boundaries that have been eroding with globalization for three decades. The “industrial commons” need not be limited, today, to one country or one group of companies. The network effect of having suppliers give you room to innovate effectively, or even innovate on your behalf, in combination with embracing a sound strategy, generates more value, more wealth, and more benefits for all parties involved.  I am very concerned that the Professors are lending their weight to an argument that erects artificial and unnecessary walls, stifling true innovation and growth.