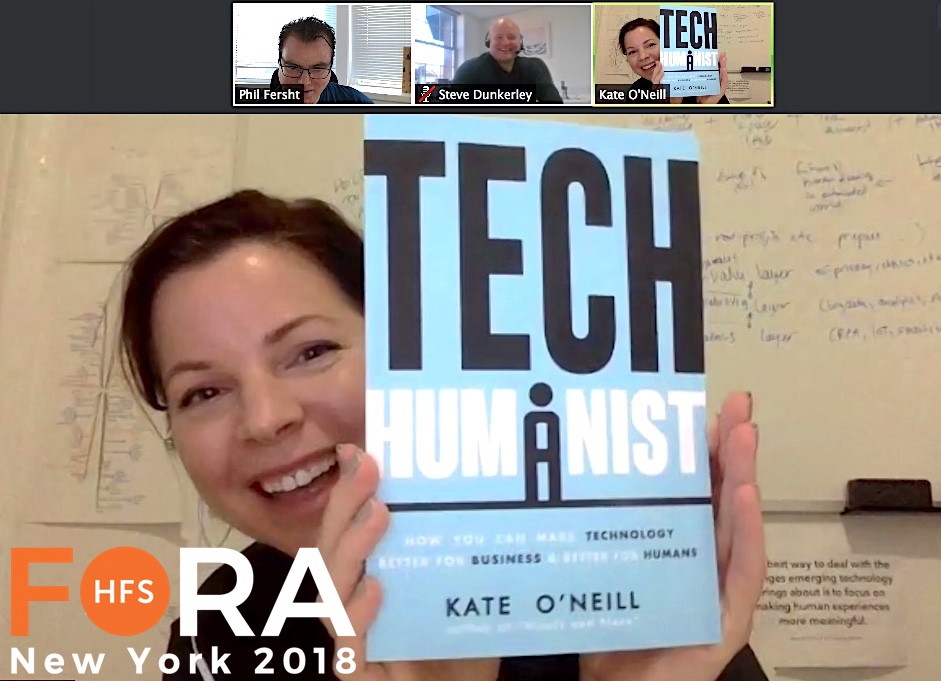 The final countdown is on for the end-of-year reality check leadership extravaganza, with HFS’ New York FORA Summit where we measure the genuine pace at which we’re Hurtling into the Hyper-Connected Economy.

We’ve been living through a journey of change agents promising to shake the very foundations of how we do business, how we engage with our customers, our partners and our employees; how we structure our business operations; how we build and source our IT backbones; how we balance our portfolios of legacy systems with super-connected platforms; how we explore the potpourri of analytics, automation and AI solutions to make us smart enough to keep our businesses ahead of the competition, where the front office can anticipate the needs of our customers, with operations geared and finely-tuned to deliver on those needs.

So time to meet one of our keynote speakers, Kate O’Neill, who will be unveiling her new book, “Tech Humanist” during her speech “How to Be Successful with Human-Centric Data and Technology”…

Phil Fersht, CEO and Chief Analyst, HFS Research: Kate, really happy to have you speak at FORA New York this December. So, can you tell us about what you will cover in your keynote, and maybe a little bit about the new book? What is really driving your thinking these days, in terms of where we’re going, and what’s changed in the last couple of years?

Kate O’Neill: Phil, thanks for having me, I am really excited about speaking at the Summit so I can share some insights from my new book, Tech Humanist, and when I last spoke last time I had just published my earlier work, Pixels in Place.  Then it was all about integrated, connected, smart experiences, and the data that’s shared between the physical layer and the digital layer.  I talked about how humans are the connective tissue between those layers of the world, and how that implies that we need to be respectful of that data, and protective of it, and mindful about the kinds of experiences that we’re creating when we use human data to make our businesses more successful, which we certainly can do, and there’s a lot of opportunity for that.

Having spoken on the topic for a couple of years and evolving the work and research that I was doing around that, it became clearer that this was part of a bigger story and that there’s more to say about the work of creating meaningful experiences around all kinds of emerging technologies, automation, artificial intelligence, wearables, and the Internet of Things for example.  This whole, broad spectrum of the full complement of emerging technologies, that are mostly driven by data, and that data is human data. So, it becomes really important to just look at that whole ecosystem, in a holistic way, and try to understand what to do with that data, to make our businesses as successful as they can be, within the construct of creating more meaningful experiences for humans, and being respectful about the data that we’re using, in that case.

Phil: And in terms of this new wave of noise, Kate, it seems that we have been on a four-year cycle of hype, which initially was around digital disruption.  Then people realized how and why they were going to be disrupted, so they got a handle on that. Now there’s been a lot of fairly advanced thinking around AI, and how that’s shifting the paradigm further and it almost feels like we’re almost coming back to reality and really figuring out what this truly means for our businesses, our careers and our personal lives. Do you think 2019 will be the year where we’ll get into some real conversations? Or do you think we’ll keep seeing this proliferation of noise, hype, and fairly outlandish theory? What do you think’s going to happen?

Kate: [Laughter] I think it’s probably a little bit of both, Phil. But I think you’re right, that there is this cycle, where some of the people, who were having some of the earlier conversations in years past, are now starting to see fruits of proofs of concept and early experimentation, that’s leading to much more coherent insights, about what these things look like in practice.

Our knowledge of RPA and machine learning, for example, has matured and I think there still will be plenty of theory and speculation, but I think it’s going to be important to have that kind of theoretical conversation because it will advance the way we’re positioning ideas. I think it’s going to be interesting to see that come head to head with the realities of practice, and the way that things have been experimented with.

When I talk to people casually about how a lot of my work is around robots and automation, they seem to be thinking about some sort of far-off future, when in reality, millions of homes have Roomba and Alexa already in them. We’re already looking at the reality of types of robotics and automation in our homes, and certainly in workplaces, too. We’re used to the idea of self-serve kiosks, and self-checkout type of automation, so I think we need to have a much more nuanced conversation about what that looks like, and what it means for the future types of work that are available for humans, and how we coexist in to the next stages of automation and robots in the workplace.

Phil: One of the things, Kate, which I find really exciting is developments in things like explainable AI, where we’re working much harder with business users to design the AI, so it’s something that is driven by people, to develop business context, to really be something that we control, and we design, versus this, kind of, out-there theory, that AI’s just going to take everything over, everything’s going to be self-remediating. So, as you look at how more business-focused people are being pulled in to technology, for example, RPA being like a gateway drug to AI, how do you see this evolving? Do you see more business-centric people being pulled in to the design of technology equation here? Or do you think it’s going to be a fairly different scenario?

Kate: I don’t see one pattern playing out. In the work I’ve been doing over the last year or two, speaking and advising with companies around this, and kind of how I see that playing out as a trajectory, there seem to be a few different ways that companies are embracing how to have this conversation. Some of it is in the boardrooms and it’s about getting behind strategy first and having a purpose-centric discussion before an organization can really meaningfully model itself in data, and deploy accelerating technologies. But I think there’s an equally valid approach, in some organizations, due to culture, and due to constraints, and whatever else, that’s more tech-driven, that comes from within the IT or operations departments.  These departments look at what the capabilities and capacities are, and then accelerate around those to gain some momentum, and be able to talk about some wins before engaging the rest of the executive team, or the rest of the leadership.

Within results-driven companies, however, when there is no immediate ROI from experimenting with RPA or AI are people going to walk away from it?  If so, then it might be easiest to have it be just an experimentation house within the IT department. But if it’s something that the overall company leadership sees as a clear direction for the company, and knows that it needs to be embraced, no matter what, “We need to figure this out long-term,” then I think it can easily be driven at that central executive level.

Phil: So, one of the things which we’ll be talking a bit about next month, in New York, is the fact that we’ve really come through three decades of companies pretty much doing things the same way for 30 years, but just faster, cheaper, better, moving data around the organization more aggressively, and digitizing processes. But the fundamental problem has been, companies, particularly in the Global 2000, not changing how they run processes and run departments. So, HR has always done things one way, procurement one way, finance one way, for example. Do you feel we’re going to get to a point where companies are going to fundamentally redesign roles and responsibilities, and how they operate? Or do you think that’s happening more at the small to medium business level, where these businesses have native automation, have native AI, and it’s a different rule, almost, for the kind of dinosaur, traditional organizations? How do you see that evolving?

Kate: I think, Phil, there’s a sort of a compliment there, as well. You can certainly see where small to mid-sized companies have sort of an agility advantage, in being able to adapt their organization easily around emerging technologies, but obviously, on the larger enterprise side, you have scale, and you have, if you can get the alignment, organizationally, and operationally, to deploy kind of a roadmap approach, then I think you can really use those assets, and use your scale, to make that work. So, I think the key does seem to be, I come back to this idea of strategic purpose, and the advantage of purpose, I feel, in this context, is that purpose is what really helps people be motivated, and helps keep humans on the right track, and it’s also this way of distilling an idea, to concrete operational logistics that’s really suitable for machines.

So, if you can get to a point where you’re articulating well what it is your business exists to do and is trying to do at scale, in that sense of a strategic purpose, I believe that that is one of the ways in which we actually get to aligning the culture, aligning the organization, aligning even things like operational facets, like meeting structures, and hierarchy, and operational roles, and things like that. So there’s just so many nuances to the reality of that, that I think it will play out in different ways, for the different sizes of organizations, but also the different “techcentricities” of the organization, how digital the organization was in its DNA to begin with, but I think it’s going to take not, maybe, a one-size-fits-all approach, to make that work.

Phil: Finally, Kate, can you tell our readers where they can purchase your book, and give a taste of what they can expect to learn?

Kate: Yes, sure. So, you can find Tech Humanist, on  Amazon, and Barnes and Noble. The subtitle of  Tech Humanist is How You Can Make Technology Better for Business and Better for Humans and the idea there is about alignment, as we were just been talking about. It’s about the idea that, if technology is fundamentally built around improving on human experience, if it is using human data, if it is about constructing this environment that humans operate within, then it’s an opportunity for a business too.  Businesses can utilise those hooks if you will, to create more meaningful, memorable experiences, that help scale the business in a successful way, and also create the most opportunity for humans to thrive, in an environment where it’s going to be increasingly machine-driven. So, I think we’re looking at a reality where a lot of our world is increasingly driven by machines and automation, and I think we just need to think about how that’s going to play out, what we want it to look and feel like, and how to make business successful within that context, while also helping humanity thrive.

Phil: Excellent Kate! We can’t wait to see you again next month and host you in front of a fantastic audience of people, in a truly unvarnished conversation