The Hitchhikers Guide to Intelligent Automation, Part I

Long before it was turned into Hollywood film, Douglas Adams’ The Hitchhikers Guide to the Galaxy was one of my favorite books. It reminds me of the unburdened days of my youth when the book’s one liners and quotes were secret code among my friends. Among them was “42” as the answer to the ultimate question of life, the universe, and everything, calculated by an enormous supercomputer named Deep Thought over a period of 7.5 million years. To explain the meaning and the vision of Intelligent Automation, I wish I could throw a “42” at you.

Problem is, there are no simple answers. 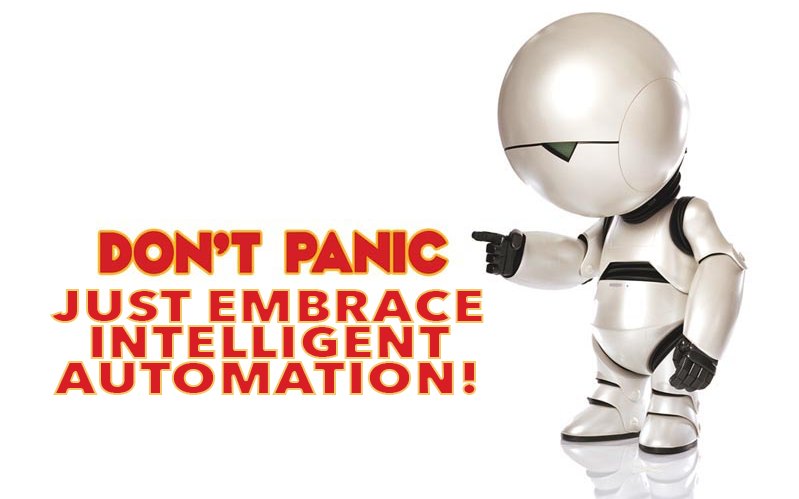 When HfS launched the Blueprint, there was broad encouragement and endorsement by the leading service providers, resulting in the project being oversubscribed. The stakeholders agreed that the main exam question should be how service providers orchestrate diverse sets of automation within the context of service delivery. How are they proactively transforming the processes for clients? Thus, the emphasis is not on task automation or isolated point solutions, but on automation from a business function or process point of view. The work through the Blueprint process is a litmus test for the state of industry.

Capgemini is a compelling example how the industry is maturing. So far, Capgemini had built out some strong RPA capabilities and was starting to expand the Intelligent Automation skills to application management around its Autonomics PaaS platform. Fast forward to July 2016 and Capgemini just announced the Automation Drive suite of services that is aiming to leverage the disparate automation skills as well as four CoEs across the traditional business units. As a result, the company is addressing the issues we have earlier. The next logical step probably would be to organize those capabilities as one CoE on Group level. In practical terms Capgemini has expanded the RPA methodology to the broader notion of Intelligent Automation. Similar to many discussions on the journey toward the As-a-Service Economy, the key was a change in mindset as many delivery practitioners had to be introduced to the intricacies of Intelligent Automation. A further goal for the Automation Drive initiative is to progress to the next level of automating the automation, increasingly underpinned by a DevOps flavor. The ultimate vision is one to evolve toward a Digital Delivery Center where the capabilities of the automation CoE are overlaid with governance and control at the business unit level.

The Bottom Line: We urgently need a debate on the transformation of knowledge work

Two other aspects caught our imagination in the discussions with Capgemini. First, the company has started to deploy IBM Watson to achieve better management of the resource bench, more accurate staffing, and anticipation of gaps, rotations as well as the optimization of the “fresher” intake.

Second, Capgemini has launched an Intelligent Automation Academy to train and upskill staff so that they can move into consultancy and advisory, product selection, and proof of concept development among other things. If successful, the Academy is likely to be extended to broader Analytics and Cognitive skills. These two initiatives are important because they are part of the transformation of knowledge work that has been all too often neglected.

Data scientists and cognitive skills don’t grow on trees. Therefore, formalizing the upskilling process is a very sensible idea. The proof will be in the pudding of successful transformational projects. The answer might not be “42” but a much more holistic approach to Intelligent Automation.