Growth in offshore-dominated services may be slowing for traditional IT support services, but for multi-process Finance and Accounting (F&A) services engagements, 2015 saw the market continue to grow at  a 10% clip.

Why? Because F&A outsourcing is about 10 years behind IT outsourcing – in terms of adoption – and is a market that can quickly take advantage of more experienced governance executives, capable service providers that have ironed out many of their past mistakes, and notable advances in analytics, robotic process automation (RPA) and digital technologies.

In short, the shift from enterprise clients approaching F&A engagements largely as a labor-obsessed cost-driven solutions towards outcomes-centric value-obsessed solutions, is now really happening. Yes, we’re finally starting to talk about F&A being delivered “As-a-Service”.  To this end, for 2016’s F&A Blueprint, which covers over 1500 multi-process F&A relationships, we’ve reoriented the performance innovation and execution scores to reflect each service provider’s alignment with the HfS As-a-Service Ideals:

So, what’s new about this year’s F&A Blueprint?

We’ve gone deeper than ever before in really getting to the essence of buyer/provider F&A relationships.  In the past, we were as guilty as the rest of the industry of focusing too much on engagements being operationally effective, when we should have placed even greater emphasis on the measures being taken by both service providers and buyers to evolve beyond meeting the decimal points in service levels, the obsession with legacy methods like Six Sigma, and the fact that achieving adequate delivery and meeting cost budgets, were considered the only desired outcomes.

“Innovation” has previously been focused more on future plans and investments (as, let’s face it, there really hasn’t been a lot of genuine innovation in F&A BPO). We’ve grown tired of people describing future models of what great looks like, and, instead, are focusing on the current willingness and commitment from service providers to work with their clients to break from the legacy mindset of preserving obsolete processes and technologies to meet prehistoric metrics that were agreed in a bygone era when cost-savings from offshoring of labor were the watchword.

In this vein, we conducted exhaustive interviews with F&A service buyers to align their current service provider relationships with the Eight Ideals of Being As-a-Service; we really put the emphasis on buyers and providers changing how they behave with each other, their appetite and mindset to start writing off their legacy processes and technologies: 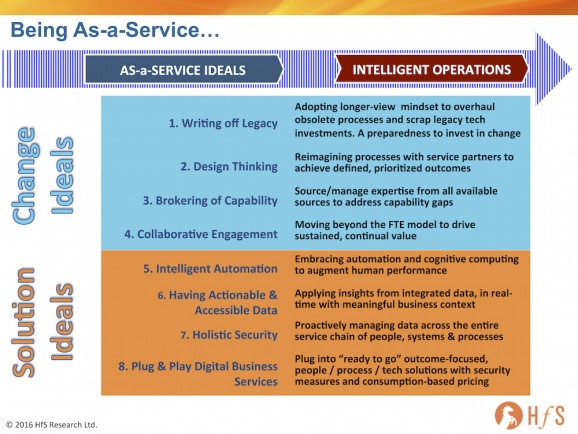 Why are some service providers being more “As-a-Service” with their F&A clients?

When you talk with most the service providers today, they are all claiming they are:

a) Willing to cannibalize existing revenues to invest in the As-a-Service delivery model;

b) Willing to share risks and gains with clients;

c) Willing to shift away from FTE pricing and move to consumption-based models with built-in outcome pricing.

The reality is that these claims are only really happening with a small handful of service providers – and only with some specific clients which are willing to have a deeper, more collaborative and trusting relationship. The most common claim from clients is that many have been stuck managing a certain number of FTEs for several years, and their service provider has no incentive to reduce that number, as that is how they get paid.  There are instances where service providers are very willing to invest in robotic process automation on their own delivery staff resources, but are unwilling to pass on these productivity gains to their clients.

1- Preserving legacy. Most service providers are far too comfortable maintaining margins with legacy engagements. The sad reality of legacy F&A BPO is there are hundreds of engagements, signed over the last decade, based purely on an FTE cost model, where the service provider is paid for managing a set number of people; reduce the headcount, and its profit margins go down. What’s happening here, is when these deals come up for renewal, many clients are pushing for new productivity gains, only to find their service providers unwilling to take margin hits, unless there is a true competitive situation. Unfortunately, for most clients, it’s hugely costly and complex to swap out an incumbent F&A service provider – and finding a willing competitor to invest in their business can be enormously challenging. It’s much harder to develop a competitive mix of providers in F&A than it is in IT, where we’re dealing with complex people and processes issues, not commodity application support. We’re going to need to see some truly disruptive offerings from ambitious service providers to change the model here, such as Robotics-led BPO, however, this also means service buyers must entrust their providers with more intimate data access.

2- Embracing As-a-Service. Ambitious service providers going after greenfield F&A opportunities with automation and analytics front and center. Many of the new deals being negotiated are where the As-a-Service action is much more prominent. Service providers are much more willing to invest in new opportunities, than make sacrifices in existing engagements.  We are now witnessing the emergence of automation-led human augmentation solutions, where some deals are partially funded by the expected headcount reduction and productivity improvements over the course of a multi-year engagement. We believe this will be especially relevant in F&A contracts, which form the baseline of the BPO market today. However, buyers need to be much more willing to enter into deep collaborative relationships with their service providers, where they stop forcing their providers to only access their systems using Citrix, which limits the effectiveness of RPA overall and encourages an “us versus them” mindset between buyer and provider. Both parties cannot enjoy the full benefits of RPA and Intelligent Automation, without genuine collaborative engagements and a holistic security model that aligns the capabilities more effectively.  In addition, greedy buyers need to stop treating RPA like legacy offshore BPO and demanding all the productivity savings up-front, before the RPA benefits have been formalized – and without realizing that RPA often drives up service provider costs in the short term for increased testing and QA.

Who are the standout performers for F&A As-a-Service?

The outstanding two service providers are Accenture and Genpact.  Accenture leads the market in terms of sheer size and scale (we estimate its annual F&A BPO revenues now exceed $1 billion), and has made considerable investments in its analytics and RPA capabilities.  Most impressive are its on-demand FP&A apps that really create an As-a-Service mindset for its delivery staff and clients.  We would like to see a mid-market approach to emerge from Accenture in this space, considering its As-a-Service approach and ability to plug new clients into its massive global delivery model.

Genpact has really re-emerged in the market over the past 18 months, winning a host of new deals which have deep commitments for future productivity improvements through RPA built in.  The firm has also made good progress evolving relationships with existing clients which were originally signed up in the legacy lift-and-shift model. Its focus on LeanDigital and CFO consulting has helped the firm move up the value chain with a proven reputation for consultative process capabilities. We do hope, however, that Genpact can stay more consistent with its offerings in the future, as it does have a habit of confusing the market with too many product launches, using too much jargon.

IBM‘s Global Business Services team has convinced the industry it is still very committed to F&A, and is aggressively looking to embed Design Thinking and Intelligent Automation into its engagements.  It’s commitment to RPA and cognitive could be huge differentiators for the firm as it embeds these into its engagements – and Watson’s “Buying Assistant” tool signals the potential of further expansive cognitive capabilities for F&A.  We would, however, like IBM to embed its technology portfolio better with its F&A offerings – too often they come across as standalone tools.

EXL makes winners circle in F&A for the first time with a genuine top-down determination from its CEO to embrace the ideals of As-a-Service. The firm is a real example why some mid-size service providers are adapting much better to As-a-Service than some of the monolithic Tier 1’s – it can scale down to pick up mid-market engagements and is big enough to play at the big table. EXL also has a genuinely collaborative client centric approach which really helps it deepen relationships in areas like process improvement and analytics – and has stayed true and consistent to its product offerings over the years, with EXLerator, for example, effectively supporting process improvement for several clients. We would like to see it build on its nascent RPA capability with its recent partnership with Automation Anywhere.

TCS also makes its first F&A winners circle, with a determined focus on RPA in O2C and P2P processes. TCS is proving highly determined to prove the RPA model to its clients by taking risks and making revenue sacrifices. Moreover, its diverse portfolio and vertical depth in BFSI, manufacturing and utilities are starting to bear fruit in F&A. We would like to see the firm clearly articulate its overall focus and mission moving forwards, as TCS currently has so many initiatives in areas such as automation, cognitive, digital etc., that it sometimes comes across as a confederation of multiple businesses than one integrated enterprise.

Capgemini continues to be a leading F&A provider with its renowned global process model and real focus on operational excellence in finance delivery.  Moreover, its acquisition of IGATE could deliver real potential for the firm’s “As-a-Stack” approach to F&A by marrying IGATE’s ITOPS platform and bringing much-needed vertical industry depth. We would like to see greater urgency and focus on integrating the BPO components of IGATE and the firm would also benefit from increased focus on analytics.

WNS makes up the winners circle – also a first-time entrant – with a very effective outcome-based pricing approach and CFO framework, popular with many clients.  Not unlike EXL, being a mid-sized provider is playing to WNS’ advantage, with its aggressive sales approach and client-first mentality. We would like to see WNS expand its footprint further – both geographically and vertically – as the company continues to grow and perform well in the As-a-Service era.

Other standout As-a-Service performers include: Sutherland, which has quietly won some impressive new deals and has been an early mover with RPA; HPE‘s well articulated approach to RPA; arvarto‘s order-to-cash focus; OneSource Virtual‘s entry into the market with it’s Workday model and RPA-native development environment; Infosys‘ unique focus on Design Thinking; Wipro‘s deployment of it’s Holmes platform in processes such as AP and fraud detection.

And finally, what developments can we expect to see in this market over the next year?

Two Ideals are dominating the F&A As-a-Service space – Intelligent Automation and Actionable and Accessible Data, and I expect these to continue to differentiate the service providers.  While I see capabilities around RPA becoming fairly commonplace in the coming months, the ability to support the data underbelly for the finance function will come to the fore – and clients will need to let their service providers into their intimate systems and data repositories for them to be truly effective together.

With all this pressure coming from the front office to embrace digital business models, the onus is moving to the middle/back offices to keep pace with the changes happening at the business end of organizations, with the finance function being the fulcrum for future agility and responsiveness to market conditions.  I also believe we will start to see Design Thinking start to emerge as a methodology for buyers and providers to make the shift to As-a-Service, and the finance function is a place where many organizations need some serious re-imagination if they are ever going to break from legacy habits.

This market has a long way to go, and the real work of making the shift to As-a-Service is still in its very early days.

HfS readers can click here to view highlights of all our 37 HfS Blueprint reports. See our plans for 2016 Blueprints here.