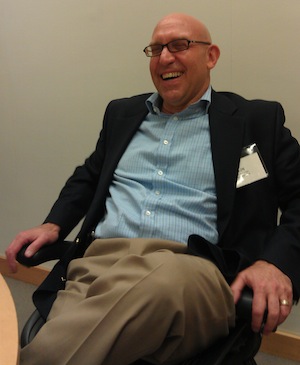 One chap we’ve been trying to get on here for years is known simply as “The Don”… to anyone who knows him.

There aren’t too many people who shun the media spotlight to discuss the intricacies of the ideal end-to-end expense management process.  Nor are there too many senior executives who will quantify exactly how many hours, minutes and seconds they shaved off the time it took to execute that process for a client – and demonstrate exactly how they did it.

However, as IBM’s Donniel Schulman’s reputation and influence in the BPO industry has grown in recent years, we’ve finally persuaded the chirpy New Yorker to share some of his story since IBM entered the BPO industry via its 2002 acquisition of PwC Consulting, which included a number of large-scale F&A contracts.  Today, Don leads all the finance and accounting, procurement and supply chain managed services, combined under his leadership as an integrated unit.

Phil Fersht (HfS): Don, I’ve described you as one of IBM’s “best-kept secrets”. You’re not on every podium speaking, but instead you tend to be operating behind the scenes running a lot of the F&A and procurement work at IBM. Would you please tell our readers about your background, where you came from and how you got to where you are today?

Don Schulman (IBM): Thanks very much Phil. I’m humbled by your compliment. My career began in banking and financial services, serving primarily in operations roles. After that, I had a boutique consulting firm in the working capital management space, and eventually broke into PwC where I was fortunate enough to be able to lead its financial management businesses worldwide I came to IBM via its 2002 acquisition of PwC Consulting. I actually worked for a while on IBM’s own internal transformation, reporting to the Chairman’s office. And then six or so years ago, after the BPO business had been formally kicked off they asked me to come in and lead this F&A and procurement business. And now I’ve had the terrific opportunity twice in my career to help create a new consulting industry, first in the world of shared services and then in outsourcing.

Don: Interesting question. Let me alter it a bit to what’s it like working for IBM. I think there were two big changes for me in becoming an IBMer. On one hand, it’s like being a kid in a candy shop, having all this accessibility, all this unbelievable stuff- technology, client base, investments. On the other hand, IBM is one of the most disciplined corporations in the world, which is nice to have as a benchmark in my back pocket for my clients. With that discipline, quarterly reporting requires a framework and a frame of mind that in private partnerships and private equity companies you just don’t need to deal with, so it’s been an education process for me. I’m delighted that I’ve been able to work through it, and I actually have a lot of respect for the process. At the same time, my group is a “tip of the arrow” business model. It’s one of the fastest growing businesses in all of IBM, and we get a lot of investment support, both in terms of acquisitions and homegrown investments. We also have a lot of flexibility and freedom – much the same as you have in running your own business – because we’re not the typical IBM technology business. So it’s a nice balance.

Phil: So when you view the current state of the BPO industry today, what do you see the core differences compared to when you first became part of IBM?

Don: I think the most important difference is that BPO began with a focus on consolidation, offshoring, and labor arbitrage,, and the associated efficiencies. But now, the marketplace has really begun to appreciate that it’s really about business process, effectiveness, and intent. There were different fits and starts in this space. I think there are some companies that are here for the long run and really “get” the big idea. And I think there are other companies that hear the rhetoric but can’t get past the “I just want to offshore.” Analysts like you are helping to drive where the industry really needs to go, which is really about effectiveness and business outcomes, and not only about efficiency.

Phil: HfS Research has revealed new demand-side data (see earlier post) showing the market is rebounding quite aggressively coming out of the Recession – particularly with indirect procurement, F&A and strategic sourcing – . What’s your take? Is the market rebounding as quickly as we think it is, or do you think it’s more evaluation?

Don: My first observation is that we thought we were in a Recession-proof business and we were wrong. The business did decline, and we also see that it can come back. But we see it being significantly different than it was in the past. In the past, outsourcing was all about putting out big RFPs, picking up your business, responding to the RFPs, holding people a little bit at arm’s length to figure out who the lowest cost provider was. Now, relationships are changing dramatically. Companies are coming to us saying, “We’re looking for a transformation partner. We want you to partner with us, to consult with us, to help us drive our transformation agenda, and maybe even define our transformation agenda. We want you to provide the big innovation ideas that we need to drive ahead, and take the risk with us as we go down that path.” We see this as a dramatic shift. We see deals becoming much larger because they had been on downward journey, and they’re getting much more complex. They’re not about headcount. They’re about transformation and innovation.

Phil: IBM had been one of the first of the providers to bring together procurement, supply chain and F&A services into one integrated unit. What was the thinking behind that, and how are the areas blending?

Don: There were both strategic and tactical reasons for bringing them together. Strategically, we realized that a lot of the outcome-based kinds of deliverables we’re providing – whether it’s working capital or sourcing – are actually the same in both functions. Also, the operational proficiency in procurement and F&A are actually very similar. Therefore, the investments we make, the way we approach the business model, the way we approach the value propositions and even the way we deliver the operations all become very similar. However, the biggest thing by far was the concept of end-to-end source to pay, going what I call “inside-out” from sourcing a vendor all the way out to the payables, and from the payment all the way back in. And by combining procurement and F&A in what we call collaborative commerce, there’s a real opportunity to drive end-to-end. In fact, we’re forcing the end-to-end.

Phil: In the supply chain space, I was excited when IBM acquired Sterling Commerce, in addition to several other tech companies with specific supply chain competencies. How is that fitting into a broader sourcing context for you?

Don: With the acquisition of software like Sterling, there’s some overlap we’re trying to sort through, but we’re very excited about it. We believe it gives us a unique opportunity to take a piece of middleware like Sterling and modify, codify and configure it very uniquely to the supply chain market with the tactical kinds of activities that we do in our operations, and provide it to our clients on a need-be basis. And Sterling is just one example of many pieces of software that we’re doing this with.

Stay tuned for Part 2 (you can read here), where we discuss whether shared services is really dying, how Don views the changing role of advisors, and where he sees the BPO industry moving in the future…