The traumatic Q4 results season has finally ended and our Chief Data Officer, Jamie Snowdon, is able to report on the final Q4 standings…

We’ve visualised the latest set of results for Q4 in the diagram, the top chart shows our usual margin v growth view (excluding AWS). With a chart showing the quarterly growth for Q4, an estimation of the annual (calendar) growth and the Q4 operating margin. 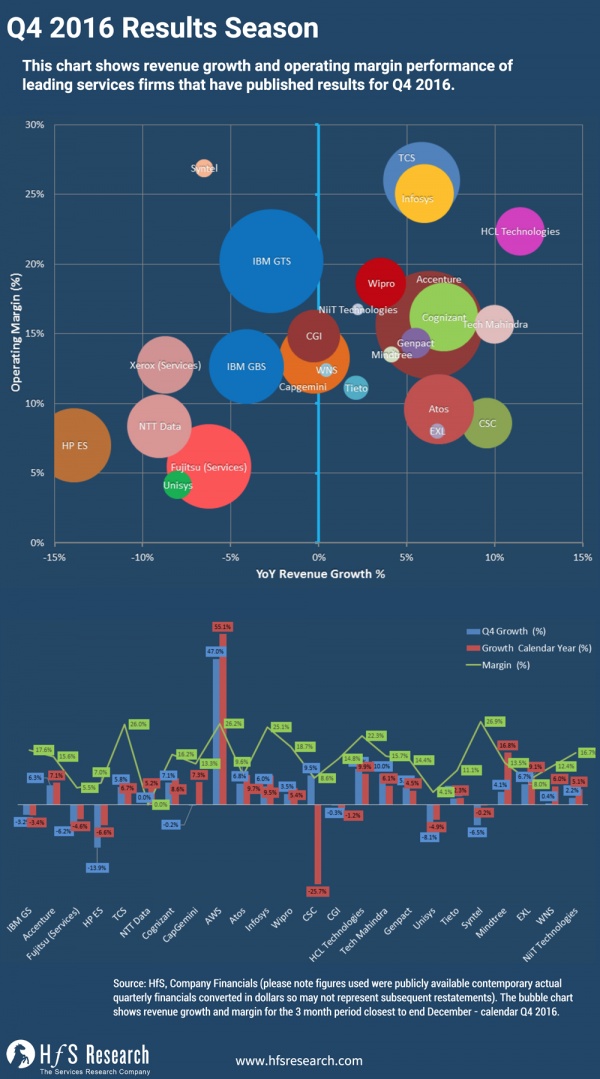 For each of the providers the results look like this:

However, it is important to view Q4 in context, the following chart shows the average and weighted average revenue growth of these tracked providers, which represent 75 of the largest IT and business service companies. 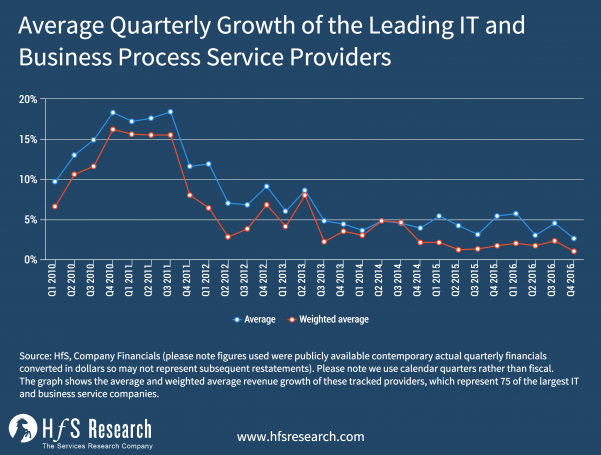 After a strong Q3, Q4 dropped back – making it the worst quarter for average growth since 2010. There are a number of factors that caused this drop – partly the on-going uncertainty in the market heightened by Brexit and Trump, but also the last few quarters were boosted by revenue from smaller acquisitions which no longer impact the growth.

The Bottom Line – The traditional outsourcing model has had its day, now we need to focus on the emerging client needs in this transitional market

For the market as a whole Q4 was a disaster – with the worst average growth rates seen since we started this tracking in 2011. This really shows how much the market is shifting toward new more technology driven solutions and how much of the traditional cost is being cannibalized by these new digital platforms and automation.

The onus is on us as analysts to start looking more deeply into the underlying trends in the market as the top-line data is increasingly swamped with hangovers from last decade. There is growth out there – but it is barely offsetting the declines in existing business. We have looked under the hood of the infrastructure management services market in one of our latest reports – IT Infrastructure Management Services in the Post Digital World – which is available on hfsresearch.com.

Posted in : IT Outsourcing / IT Services, trends-analysis