Since we published our first report on blockchain, we continue to talk to players in the industry about how this fast-moving market is changing and growing. Compared to last year, there’s more discussion about security and privacy (evolving from the “blockchain is unhackable” talking point that was popular last summer,) there’s more talk about non-financial examples like using blockchain to help with supply chain compliance issues, and a hunger to get beyond POCs into valuable operational execution.

Recently we spoke to Santosh Kumar, Rob Ellis, and Mani Nagasundaram from HCL about blockchain trends. HCL shares many characteristics with the players we included in the report, such as:

Regarding trends, HCL sees a lot happening in security and privacy, as well as regulatory agencies stepping up to help businesses form some governance policies around blockchain. We’ve seen in the past few months that while maybe the blocks in the chain aren’t hackable per se, there have been identity thefts, fraudulence, and further concerns about public blockchain networks.

The HCL team notes that transactions are well executed in blockchain, but identity validation and asset validation are less mature. And valuation of assets still needs to happen in the real world, so they caution over-optimism in moving quickly to broad blockchain adoption.

They also believe that maturity in blockchain comes in three phases and that blockchain mirrors the Internet itself in this maturity curve:

When you get to the discussion of new business models, HCL has a few scenarios that they share (see Exhibit 1 for an example.) We like HCL’s ability to not just explain the technology in-and-outs, but blockchain’s impact on business. In the blueprint guide on blockchain, we scored providers highly on innovation when they have strong business stories and the ability to demonstrate blockchain’s potential to prospective clients. 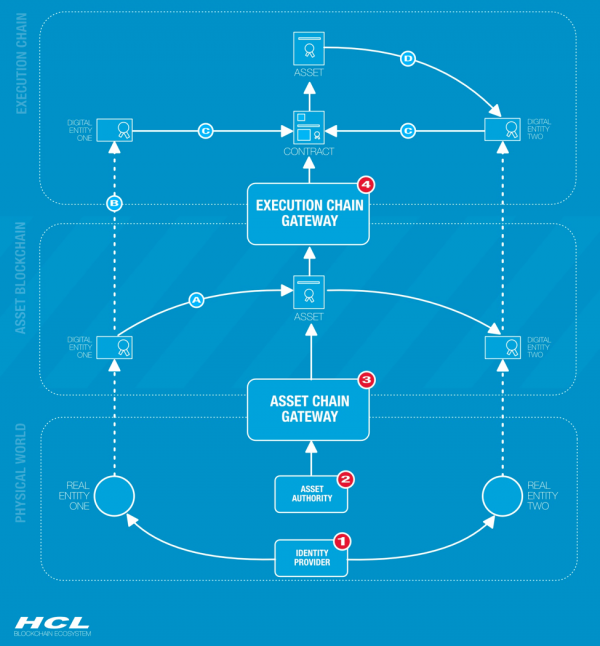 Bottom Line: 2017 will be an important validation year for blockchain

As HfS continues to research HCL and its competitors, we’re looking for the following in 2017:

Posted in : Blockchain, Procurement and Supply Chain, The As-a-Service Economy