ADP jumps head-first into RPO with The RightThing acquisition, but will this be enough to take on the big players? 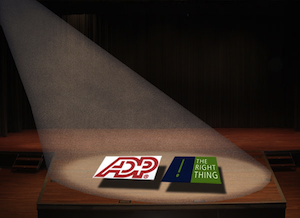 ADP makes its move into the lucrative RPO market

ADP, the HR and payroll services giant, is a staple analogy in the BPO business. It has such a dominant command of the payroll market, there’s no room for new entrants (many have tried and limped away); it commands the archetypal “one-to-many” delivery model with regional service hubs in all major geographic regions; it servers for small, mid-sized and large organizations with a sales and delivery infrastructure that can cater for all types of clients; it also has a rightful claim to be the first true “Business-Process-as-a-Service” offering – years ahead of its time – but doesn’t get a lot of plaudits, because there isn’t a lot of sexiness about payroll.

However, don’t tell HfS’ Keith Strodtman that payroll isn’t sexy… he lives and breathes the stuff, however, today he’s going to talk about how ADP is moving “beyond payroll” with its forays into broader talent management and HR technology segments- and – most notably – it’s move into the Recruitment Process Outsourcing (RPO) market with the acquisition of the popular “The RightThing”.   Over to you Keith…

ADP  has added another tool to its HR BPO toolbox with the acquisition of RPO provider The RightThing.  The acquisition of the twenty-year old privately held firm is ADP’s first foray into the RPO market.  Terms of the deal were not disclosed but it is clear that ADP is sticking to its “beyond payroll” message to support its growth strategy.  Its “beyond payroll” business are already growing about three-times faster than its traditional payroll business, with acquired businesses playing a big role in that growth.

ADP, the world’s largest payroll processor, has used its substantial war chest to completed several acquisitions in the last few years.  Examples include: Workscape – a provider of benefits and talent management solutions, AdvancedMD – a medical practice management solution provider, and OneClickHR – a HR technology provider based in the UK. The company has long participated in portions of the recruiting services market with its pre-employment services business that includes background screening (acquired about ten years ago) and talent acquisition software solutions acquired when it bought Virtual Edge in 2006.  The additional of The RightThing acquisition takes the company to new levels in the talent acquisition market.  Moreover, ADP’s global salesforce has the on-the-ground scale and client-side connections to push RPO services onto its massive client base. ADP can apply its sales and client infrastructure to scale the RightThing business to the next level and compete with the likes of Manpower, Adecco etc.

The RPO market appears to be well-positioned to capitalize on the talent gap megatrend that is emerging globally.  Despite high unemployment rates in many of the world’s developed economies, many CEOs have reported that their companies job openings but can’t fill them because they can’t find workers with the proper skills.  According to the US Bureau of Labor Statistics, there are 3.2 million unfilled positions in the United States.  Companies are looking for solutions, like RPO, that can help them find workers with difficult to find skills.

The RightThing addition also strengths ADP’s multi-process BPO offering.  While broad scope multi-process HR BPO deals are not as common as they once were, having an RPO offering gives ADP one more opportunity to get a “foot-in-the-door” to establish a BPO relationship.  It also elevates the conversation with customer HR executives, something that will support sales of the recently announce talent management solution that is part of ADP’s new Vantage HR solution.

The RightThing is considered among the leaders in the RPO provider market, which counts more than 20 significant providers.  The RightThing’s current customers may not see a lot of near-term upside in this deal, other than the obvious financial stability of ADP – one of only four corporations with a AAA credit rating.  But there is probably not a lot of downside either.  ADP has traditionally done a pretty good job of retaining customers of acquired companies so there is probably limited risk of The RightThing customers feeling disenfranchised.

If ADP can execute, it could become a huge player in the RPO space, at least in the US market.  Global RPO growth may require more acquisitions, as The RightThing is North America-centric.  But there is one variable that we think ADP will need to address to truly realize the benefits of this purchase: encouraging its clients to standardize its recruiting process and technology – something at which ADP has proven adept , with its GlobalView and BPO offerings.  Their Virtual Edge recruiting product is well established, which they should be able to leverage the platform for broader RPO clients, however, ADP may well look at picking up a recruiting marketing platform (such as Jobs2Web) or other niche solutions such as the HireVue video interviewing product.

However, RPO, and recruiting in general, has not yet been fully embraced by buyers, with a quagmire of technology platforms, fragmented processes and the onset of social media to complicate the issues.   Recruiting process and platform standardization will be required if ADP is to be successful at scaling the RPO business to be a mass-market utility solution – but we also view this as a major opportunity  for ADP to attack this market.  If they figure out how to scale the business, they will have a huge customer base at which to sell these newly acquired services.  Regardless of the scale, however, there is little doubt that ADP has strengthened its already market leading BPO business and continues to bolster it “beyond payroll” services.