Any BPO veteran will recall Affiliated Computer Services (ACS) as one of the early darlings of BPO, which existed right at the top of the competitive tree in the early 2000’s, whenever a large Finance & Accounting, HR or call center deal was up for grabs.  They were also a pretty handy domestic IT services shop before the Indian offshore pureplays arrived on the scene. It would always give Accenture and IBM a run for their money in BPO pursuits, and had a compelling client-focused culture and engagement methodology for many of the old world BPO engagements (i.e. a lot of lift and shift and staff re-badging).

Two years into its $6.4 billion acquisition by Xerox, management has finally decided to phase out this famous old brand… HfS Research’s Tony Filippone and Phil Fersht take a closer look into why Xerox brass has now decided to do this, what it means to this heritage business, and where it needs to focus in the future to strengthen its market position.

Corporate-naming consultants must have pitched ACS a dozen better names, but none better than the one it interred today. The fact is, straight-talking ACS has never spent the billions its competitors have on branding. In fact, even their unremarkable logo remained nearly identical for the company’s 24-year history. All this makes us believe that today’s announcement that ACS will now market itself as Xerox, rather than “ACS, a Xerox company” is a sign of opportunity and synergy. 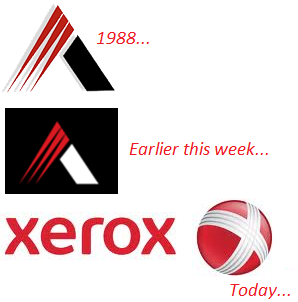 As its branding has reflected and its customers know, ACS’ success is not because it is smarter than everyone else.  Rather, ACS simply outhustles its competitors. Its Midwest American values make the company the likeable, down-to-earth service provider that gobbles up government deals one after the other. Moreover, it is focused on technology-based outsourcing solutions, not headcount. Its vertical experience is a marvel, with strong positions in government, healthcare and financial services.

The acquisition announcement had analysts everywhere wondering exactly what the offspring of a toner cartridge mother and a call center father would be like. Mixing this capability with Xerox’s traditional business has clearly not been easy. Our discussions with buyers suggest that Xerox’s aggressiveness has put off clients who don’t want to hear sales pitches, while Xerox’s recent acquisition of the Breakaway Group indicates that Xerox is supporting ACS’s industry-focused approach. However, we’ve also heard that Xerox’s rigid financial management process at times conflicts with clients’ needs for flexibility.

When the acquisition was announced, it was obvious that Xerox saw Dell’s Perot acquisition and HP’s EDS acquisition as examples of technology manufacturers entering the services business. “With ACS, we take another step forward, expanding our leadership to include business process outsourcing that helps simplify document-driven work,” claimed Xerox CEO Ursula Burns at the completion of the acquisition.

Well, a lot has happened over the last few years that shows just how difficult corporate transformations can truly be:  IBM’s transformation from a manufacturing company to a services organization continues to much ballyhooed success, HP’s public leadership brouhaha has held the firm back, and Dell Services (formerly Perot) continues to grow, but it’s clear that Dell remains a technology product organization.

Xerox’s 2011 Q4 earnings release held a mixed bag as it relates to services revenues. While its BPO earnings increased 8 percent, its ITO earnings dropped 6 percent. When compared to its competitors in the BPO arena, Xerox has slipped further from the top tier into the middle of the bunch since the Xerox buy-out.  Accenture and Infosys’ recent quarters featured increases of at least 20 percent in outsourcing revenues, while IBM showed a 3 percent improvement and HP stayed flat.

The easy story this tells is simple: printers and ink relationships aren’t going to win you an outsourcing engagement given the aggressive ADM marketplace and sophisticated sales approaches of their competitors.

The harder story to decipher is the development of the marketplace for document management outsourcing. While companies clearly don’t want to print more, they certainly want to redesign processes in a manner that eliminates the need for documents to manage. Based on numerous discussions with buyers, we’re confident that buyers want to redesign their processes to reduce the source of costs, instead of simply managing them more cost efficiently. The question is how Xerox will cope with the more complex projects this shift generates.

The Bottom Line: The hard work starts now for Xerox

Having two names confused the marketplace and hid any synergies from view. Having one name suggests that there aren’t two different teams providing services to buyers (buyers hate multi-party deals and the politics they cause). The elimination of the ACS brand will clarify Xerox’s account management strategy and should encourage groups to continue to work together. Xerox also needs to complete the naming soon and eliminate the decision to keep the ACS brand in Asia Pacific. This sort of decision confuses the marketplace of global buyers.

Xerox needs to pursue the vertical focus that its competitors, such as Cognizant, have mastered. Xerox has long maintained a geographic focus, but they need to refocus on global industry leadership as ACS does (did). The elimination of ACS’s brand is one step down this path, but it would be a mistake to stop here.  Xerox should organize its services team by vertical and focus its effort on strengthening vertical expertise through acquisition and internal development (Xerox is well-known for its R&D capability).

Document management isn’t a growth horizontal, it’s a cash cow. If Xerox wants to demonstrate leadership, it will need to develop strong consultative skills to help clients alleviate their reliance on documents as part of solutions. Positioning ACS’s industry leaders and improving their internal thought leadership is a critical step. Hard work is important, but this effort takes the type of intelligence the Indians love to exhibit – and Xerox will compete against them heavily. ACS needs to focus on thought leadership to battle the brainy Indians and smart consultant-wielding Accenture and IBM. They need to hire more consultative resources, invest more in their services leadership team, and be bold in their R&D efforts.

Build on ACS’ strengths in healthcare, government and financial services.  Xerox needs to bring more consultative skills and technology to the table, beyond what it inherited from ACS. While its competitors are hurriedly investing in developing business platforms that combine their business process and technology (Cloud) capabilities, we are yet to see Xerox put a stake in the ground to develop solutions beyond document management that can set the industry alight.

Revitalize ACS’ horizontal BPO businesses.  While ACS’ position in F&A BPO has slipped in recent years, it has a great chance to leverage the Xerox brand and significant customer base in document management to open up more client conversations and opportunities.  Adding more consultative capability in finance transformation would help elevate Xerox’s differentiation  from much of the competition- solely relying on brand isn’t going to fly for many customers.  Xerox has also inherited a stellar HR outsourcing capability, with the respected Buck consulting division helping cement its position in the market in recent years, while also developing a strong business line in benefits administration services. Like F&A, Xerox needs to give its HR business plenty of investment in terms of sales acumen and market awareness, but is well positioned to challenge for market leadership with many of the leading HRO providers struggling to grow their businesses in today’s environment.  Procurement BPO is also a market where Xerox has a belated opportunity to make a push, with such strong internal manufacturing competency, but needs to make some specific investments in platform development, category expertise sales and marketing to make up for lost ground against the likes of IBM and Accenture.

Its ITO business needs a serious overhaul. Losing revenues in a growing market indicates a real weakness. While ACS still had a strong ITO business two years ago, today’s ITO environment is too commoditized to be a “me, too” player. Xerox needs to differentiate its ITO offerings through development of business platforms, build on its strong US domestic capabilities, get aggressive in search of strong acquisitions (such as Genpact’s acquisition of Headstrong), or exit the business. ITO cannot be built on the back of toner cartridges and multifunction devices, while other service providers show aggressive tenacity to win marketshare.

Xerox has a market awareness problem when it comes to services.  When you talk to Xerox, what are you talking to them about?  What is the company focused on today – are they selling a machine or a business platform?  Xerox needs to develop some real thought leadership in the markets it chooses to go after.