And here’s the 2016 RPA Premier League

We did in once, we did it twice… and I bet you never thought we’d do it a third time. Yes, amigos, it’s the 2016 airing of how effective the leading service transformation providers are in that beloved RPA space that just refuses to go away… 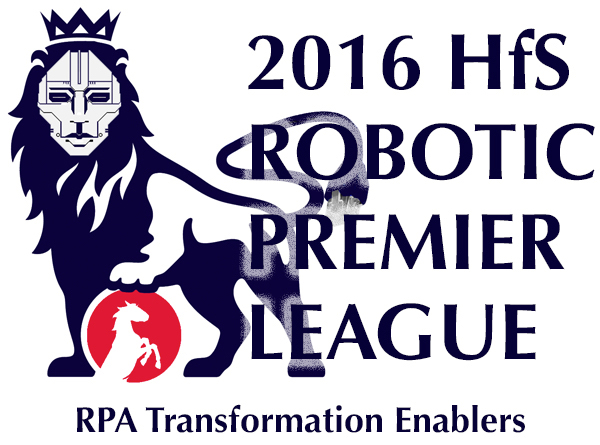 Ever since HfS bought the topic to the attention of stakeholders back in 2012, the robotic thrum of RPA throbs louder and louder. With the conference circuit over-flooded with more and more RPA conferences, robotically repeating the same rhetoric, the actual RPA deployments are significantly scaling up and M&A in the space is gaining momentum. Yet, true meaning and definition of what truly constitutes “RPA” are as blurred as ever, as more people jump on the bandwagon who couldn’t define cognitive vs digital vs autonomics, if their job really depended on it. Enough reasons to take stock where this industry is at, and add some definition and clarity to this fuzzy world into which we’re stumbllng. With that in mind, we asked our analytical Automation Overlord, Tom Reuner, to talk to the industry’s stakeholders who buy, sell, implement and generally go nuts over this stuff… and take a fresh look at the market dynamics.

(HfS subscribers can click here to download their freemium copy of the 2016 RPA Premier League table and analysis, authored by Tom Reuner and Phil Fersht.)

So, Tom, amidst all this noise what is really going on in RPA these days?

Noise is a good way of describing it, Phil. Yet, underneath the surface, we are seeing clear signs of maturation. This maturity manifests itself in different ways. The pace of change in which the suppliers are building out automation capabilities is nothing short of astounding. Most providers are embracing a holistic notion of Intelligent Automation ranging from RPA to Cognitive Computing to AI all the way to self-learning and self-remediating engines. However, we must be careful not to confuse building out capabilities with traction in the market. At the same time the leading tool providers such as Blue Prism, UiPath and AutomationAnywhere are expanding their capabilities mostly toward operational analytics and the broad notion of cognitive. Lastly, buyers demonstrate a much more solid grasp of the implications of RPA, both on the technical side as well as around the business implications. Mature sourcing organizations are starting to build out automation centers of excellence cutting across business units and automation technologies. Thus, the tool-centric discussions (often a pure tick box exercise) of the early RPA days are getting less and less.

However, despite all those positive developments there continue to be constraints. The key one jumping out is the scarcity of talent. Putting a bot into a process is not too difficult. Scaling them up to an industrial level and having both the technical know-how and process knowledge is quite another thing. It is here where the differentiation between the various providers is starting to crystallize.

What has really changed since the last HfS RPA Premier League Table?

Really all change, Phil. The 2015 RPA Premier League Table was a reflection of a still nascent market. At the time, Charles did a great job of benchmarking providers against the HfS Maturity Model, but invariably the emphasis was still strongly around the strategic vision and the effectiveness of the market communication. In 2016 the market has strongly progressed toward understanding and applying RPA as transformation projects. We are finally starting to overcome the early misconceptions that RPA is a turn-key solution, non-invasive, low risk and largely focused on replacing FTEs. Not least from many failed projects the market has learned that, unsurprisingly, life is much more complex. Underlining this point, RPA tool providers have progressed to push notions of virtual and/or digital workforces. Equally, RPA increasingly is seen as part of an automation eco-system rather than a silver bullet.

As a direct consequence, the market is becoming increasingly bifurcated. The leading providers that are heading the 2017 iteration, are positioning RPA as transformational projects. The process owners have been put back center stage and discussions focus on the whole continuum of Intelligent Automation rather than just RPA. Aligned with that data curation is becoming increasingly a focal point as organizations are advancing toward the As-a-Service Economy. With that, we are seeing the rise of the Big 4 but also organizations like Alsbridge who is expanding from broader sourcing advisory. However, the other half of the market remains stuck in understanding RPA as a placeholder for short term cost take out, task automation, often on a sub-process level and often without the knowledge of the process owner.

Lastly, M&A is accelerating with Pega having acquired OpenSpan and just this month ISG acquired Alsbridge. And the market is rife with rumors about more transactions. In our view, M&A is a strong benchmark for increasing maturity as money talks louder than PowerPoint.

So Tom, what was your methodology behind putting together the 2017 RPA Premier League Table?

The RPA Premier League Table is building on and following up on the discussions for the HfS Intelligent Automation Blueprint. Thus, RPA should be seen as a subset of the broader service delivery capabilities of the service providers. The input for the Blueprint was enhanced by additional material and discussions with the respective service providers. Additionally, we had discussions with Blue Prism, UiPath, and AutomationAnywhere to get a steer on their partner eco-systems. Based on these inputs we have evaluated the services providers against the following criteria:

Not beating around the bush, who is standing out as RPA performer?

Phil, the leading providers are blending a holistic approach to automation with broad transformational capabilities. Top of the tree is Accenture who is complementing its consulting capabilities and a plethora of third party tools with its new proprietary Accenture Robotics Solution. The solution is modular and able to integrate optional technologies for each client, for example, by using Google or Facebook APIs when needed. Deloitte is the strongest riser in the RPA Premier League Table by pushing a holistic transformation agenda. Cognizant’s automation team within the Emerging Business Accelerator (EBA) is at the vanguard of educating the market place on the implications of automation. Close behind the leaders is EY and TCS. EY has embedded its RPA approach into the broader Smart Automation Framework with a strong focus on transformational projects helping clients to move toward self-service and CoEs. Conceptually, EY is moving toward the notion of the OneOffice. TCS’ RPA approach has significantly matured, in particular by embracing a hybrid tool strategy and by focusing its go-to-market around nuanced use cases. However, the context is by no means just BPO centric scenarios. Atos and Capgemini are examples for driving RPA tool sets into application management scenarios. Alsbridge stands out as one of the few sourcing advisors, and the only one with a global presence to expand its capabilities into RPA implementations. These capabilities were a key consideration for the acquisition by ISG.

Gazing into a crystal ball, what can we expect for 2017?

If I would have all the answer, Phil, I could make a lot of money. But on a serious side, two issues are standing out for me. First, M&A will accelerate and disrupt the market. Following on from the acquisitions of Alsbridge and Automic, leading tool providers as well as the leading pure-plays are likely to be absorbed by acquisitions of the next 18 months. This might lead to more proprietary tools being developed, both to mitigate those risks but also to allow for broader functionalities. At the same time, go-to-market strategies have to be adapted as the large management consultancies will play an increasingly dominant role as RPA deployments will pivot around transformational projects. Second, the rise of Virtual Agents. We will see increasing traction of virtual agents that will fundamentally change the notion of service agents. These deployments will push more holistic automation approaches while disrupting workforces. Thus, these agents will increasingly offer broad management capabilities such analytics and integration capabilities for code and files. Therefore, the focus will shift toward enabling a seamless customer journey underpinned by broad knowledge libraries, dynamic case management and above everything else NLP. Thus, RPA will have to be part of ever more holistic automation approaches.

HfS subscribers can click here to download their freemium copy of the 2016 RPA Premier League table and analysis, authored by Tom Reuner and Phil Fersht.