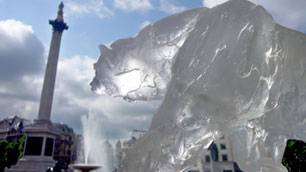 Most people I speak to can't wait for 2009 to be put to bed.  People suddenly awoke to the realization that everything they have grafted so hard to achieve in their lives could be seized from them, because their economy had failed them.

Like everything else in this world, we always wait until its too late before taking drastic action, and 2009 epitomized this reactionary mindset that dominates so much of our society.

However, I did want to sign off from 2009 with a dose of realism… fancy phrases such as "New Normal", or "Preparing for the Recovery" only wash when they attempt to address the question: "How the blimming heck can we radically change our attitudes and actions to save our children from economic and environmental disaster".

But what really gets my goat is that we keep on making the same mistakes over, and over, and over again.  One can only hope that the lessons of this year will have broader ramifications than simply learning how to bail out banks and save our stock market from total collapse.  Somehow I doubt it; 2009 was just the beginning of the realization that our short-term mentality has to change, but we will – alas – likely need to endure another bout of pain and hardship before we'll eventually do something about it.  We got off too easy this time and somehow managed to paper over some pretty cavernous cracks.

For example, the same "boom/bust" cycle seems to be kicking back in.  Wall St. realized it was too important to fail, and the taxpayer footed the bill.  Now it's starting all over again… the stock market is rising despite uncertain economic conditions and continual rising unemployment.  The environment continues to be destroyed and our governments can only (again) paper over the cracks.  We've never seen a global response to saving our wealth like this, so why can't we do something to save our world for our children?  It seems that as soon as we stabilize our stock market and our house valuations, all is well in the world again.

Many of you will recall the emotional rhetoric from earlier in the year when there were calls for fundamental change.  There was a sudden realization that this time it was too late… the cracks were too wide to cover… they were becoming as wide as the growing distances polar bears need to swim to find food.  Like the polar bear, many of us thought that this time we would start drowning without sight of dry land.

However, our children's' tax burden has saved the day - they have paid for the excesses of today, while we can go on doing things as we were before. All this talk of a New Economy.  All sounds good, but without a real change in attitude and a focus on curing long-term ills, we won't really change.  We just keep papering over the cracks.

However, some good did come out of all this.  For the first time, world leaders came together and acted quickly to salvage a potential disaster.  They now know our collective fates, both economically and environmentally, are intertwined.  And they should now have worked out better ways to get things done in the future.

While it's likely going to entail more pain, at least we've made some progress at dealing with global issues.  Our businesses are now global, our economies international, so now at least our problems are global too… let's cling to the hope that 2009 marked a turning-point in how we stop papering over cracks and start rebuilding a more robust infrastructure where cracks won't keep appearing and getting wider and wider…

The picture above represents an ice sculpture from the Ice Bear Project - a polar bear sculpted out of ice, with a bronze skeleton inside.  This was created in Kongens Nytorv Square, Copenhagen, Denmark, close to where nearly 20,000 people attended the United Nations Framework Convention on Climate Change (UNFCCC) during December.