Thanks to all of you who took the time to vote in our poll "Who whould you LEAST like to see in the White House in November 2008".  We’ve had over 100 responses back, so I thought it time to update you all that Hillary, on the back of her sensational comeback in New Hampshire, is again leading the charge… yes, she is currently the overwhelming favorite NOT to be the next President.  McCain is the least offensive, but the Obama vote picked up recently, as several of you started to panic at the thought of this guy in the oval office. 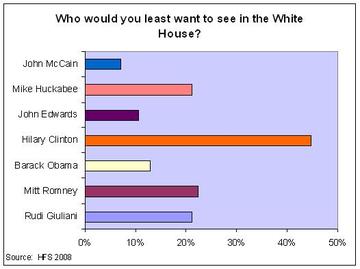 Anyhow, keep the votes and comments coming (just click on your least desirables on the poll on the left-hand scrollbar).